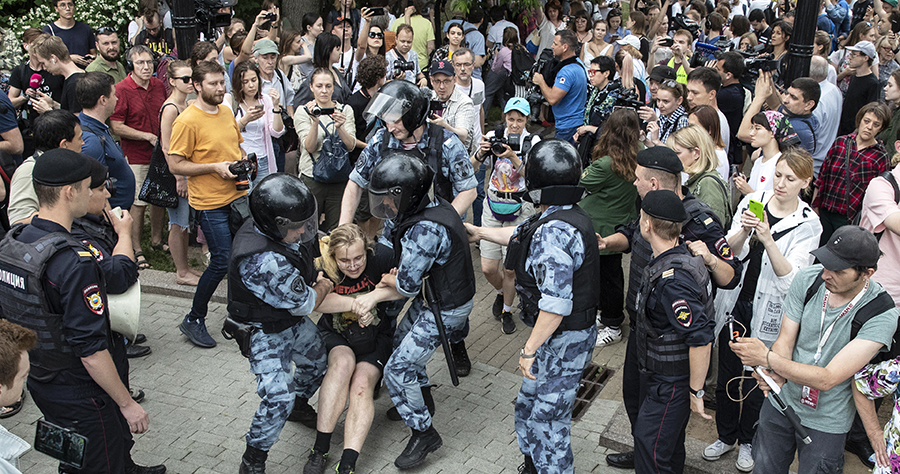 Police officers detain a protester in central Moscow on June 12, 2019 during a march against police abuse in the wake of the high-profile detention of the Russian journalist Ivan Golunov. (AP Photo/Pavel Golovkin)

Freedom of Peaceful Assembly in the Russian Federation

As delivered by Acting Deputy Chief of Mission Gregory Macris
to the Permanent Council, Vienna
June 20, 2019

The United States welcomes the June 11 release from custody of Ivan Golunov, a Russian investigative journalist who was detained in Moscow on June 6 on fabricated narcotics-related charges.

Furthermore, while we welcome the decision by Russian authorities to dismiss several officials alleged to be responsible for the case against Golunov, we urge that there be a full investigation into the conduct of officials in his case with the goal of preventing future efforts to frame independent journalists, civil society activists, or members of the political opposition for crimes they did not commit.

Drug charges are not the only pretexts allegedly used in Russia to imprison journalists and activists. We are troubled by the news that on June 14 in Dagestan, the editor of the independent newspaper Chernovik, Abdulmumin Gadzhiyev, was arrested on terrorism charges the Committee to Protect Journalists has called “absurd.”

We urge Russian authorities to take a close look at all such cases, to release all individuals arbitrarily arrested or detained for peaceful dissent, and to respect its OSCE commitments in this regard.