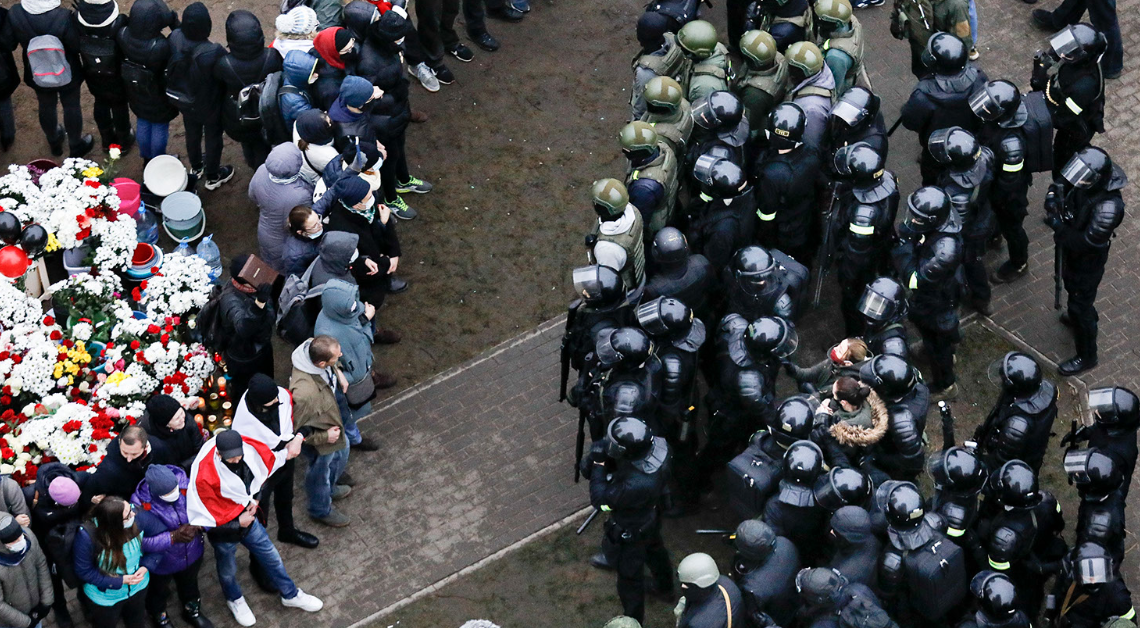 On Human Rights Violations in Belarus

to the Permanent Council, Vienna
November 19, 2020

The European Union is right.  And we follow on behind their statement.  The right to peaceful assembly is one that Americans jealously defend.  But it’s more than that, Mr. Chairperson.  It is the right every single participating State in this room that has committed to uphold this principle.  Thus, I was horrified to hear reports of a young Belarusian who was killed last week for exercising his right to peacefully protest.  On the night of November 11, thirty-one year-old Raman Bandarenka was viciously beaten and arrested by masked security forces in Minsk’s Square of Change.  After being held in detention for several hours, during which he reportedly was subjected to additional severe abuses by security forces, Bandarenka was transferred unconscious to a hospital where he died the following day from head injuries and a collapsed lung.  Raman was only 31 years old, and his compatriots were not even allowed to publicly mourn for his loss as security forces used violence to disperse and arrest over 1,200 people, then callously tore down the people’s memorial sites in Minsk and across the country on November 15.

I wish that Raman’s case were an isolated one.  On the same day as Bandarenka’s death, Belarusian authorities announced a three-month suspension of their investigation into the death of Alyaksandr Taraikauski, who died after riot police apparently shot him.  Mr. Taraikauski’s case was referenced in the Moscow Mechanism report.  These chilling cases add to the mounting evidence of the impunity with which Belarusian security forces pursue their violent crackdown on peaceful protesters and journalists, and their severe abuses of detainees.

According to credible reports, more than 100 political prisoners are currently detained in Belarus for exercising their human rights and fundamental freedoms:  for peacefully participating in protests, calling for free and fair elections, and advocating for a national dialogue to end the ongoing political crisis.  These political prisoners are held in harsh and life-threatening detention conditions and subjected to physical abuse, including credible reports of torture.  They are among the tens of thousands of individuals who have been unjustly detained since the start of the crackdown more than three months ago.

Mr. Chairperson, does anybody believe that the people of Belarus are going to return meekly back to a regime and a country that perpetrates these kinds of crimes in their name? That is the decision that still rests ahead of us. You may recall that on November 5, just two weeks ago, this Permanent Council was briefed on the appalling situation in Belarus by Moscow Mechanism Rapporteur Dr. Benedek.  It appears nothing has changed.

We once again call on the Belarusian authorities to implement the recommendations in the Moscow Mechanism report to hold new elections with international observers and to end the violence against peaceful demonstrators.  We further call on Belarus to release all political prisoners, journalists, and all those unjustly detained, and engage in meaningful dialogue with the Coordination Council and Belarusian civil society. Releasing Coordination Council member Maria Kalesnikava from detention is an essential step towards a national dialogue.  We urge the Belarusian authorities to free her immediately.  I recall, Mr. Chairperson, the irony of relating these terrible crimes that are going on in Belarus with the purpose of crushing the citizens of Belarus., and remind everyone that we just finished discussing the Nuremberg trials and how people who commit these kinds of crimes are ultimately brought to justice. If not by a national court then by an international one.

In closing, I would like to express solidarity with the United Kingdom and condemn the harassment and expulsion of two UK diplomats from Belarus on November 9.  These unwarranted acts by Belarusian authorities are only their latest attempt to distract from their relentless repression of fellow Belarusians who bravely pursue justice and democracy.