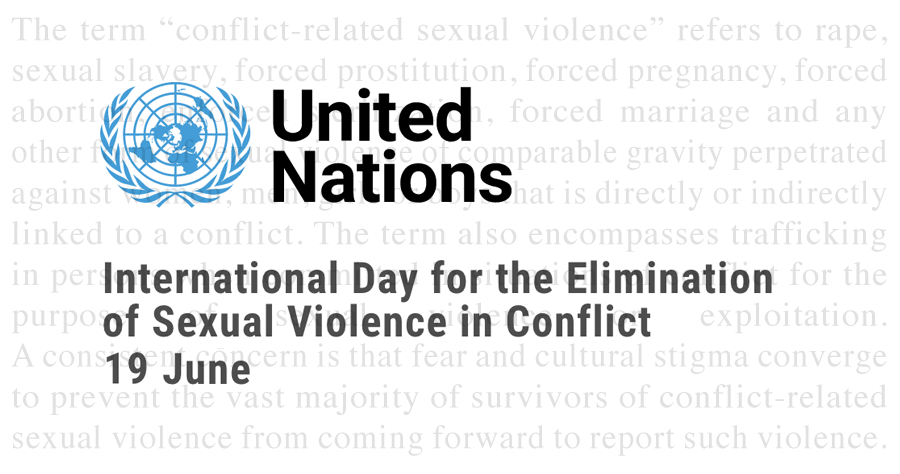 On the International Day for Elimination of Sexual Violence in Conflict

The OSCE is devoted to comprehensive and cooperative security. As such, its role in combating all forms of sexual violence, including conflict-related sexual violence, and violence against women is essential. Today’s PC discussion is a valuable opportunity to take stock of our progress and build the resolve to do more to prevent and combat sexual violence in conflict. This has been a very eloquent presentation today, a good description, and should be the foundation of all of our statements.

Five years ago, the United Nations General Assembly proclaimed June 19 as the International Day for the Elimination of Sexual Violence in Conflict. The goal in commemorating this day is to raise awareness of the need to end conflict-related sexual violence, to honor the victims and survivors of sexual violence around the world, and to pay tribute to all those who have courageously devoted their lives to – and lost their lives by – seeking the eradication of these crimes.

Greater awareness about these crimes is galvanizing the international community and promoting accountability. Just over one year ago, the UN Security Council passed Resolution 2467 on the Prevention of, and Response to, Conflict-related Sexual Violence. This resolution seeks to strengthen prevention through greater justice and accountability and keeps survivors at the center of efforts to end sexual violence in conflict.

On June 11, the Department of State of the United States released its Plan to Implement the U.S. Strategy on Women, Peace and Security (WPS). The WPS Strategy is a fundamental component of the overall U.S. National Security Strategy, and our implementation plan will strengthen U.S. efforts to prevent, combat, and hold perpetrators accountable for acts of conflict-related sexual violence.

Mr. Chairman, the OSCE has a role in preventing and combating conflict-related sexual violence. We, the participating States, have committed ourselves to preventing and resolving conflicts in all phases of conflict through many Summit and Ministerial Council decisions starting with the 1975 Helsinki Final Act, and most recently, the Ministerial Decision 3/11 on the Conflict Cycle. Likewise, we have agreed on many decisions to combat violence against women, including the 2018 Ministerial decision on Preventing and Combating Violence Against Women. We call on all participating States to ensure that all populations are protected. Today is an opportunity to strengthen our resolve to combat all forms of sexual violence, including in times of conflict.

Thank you, Mr. Chair, for the chance to make this statement.