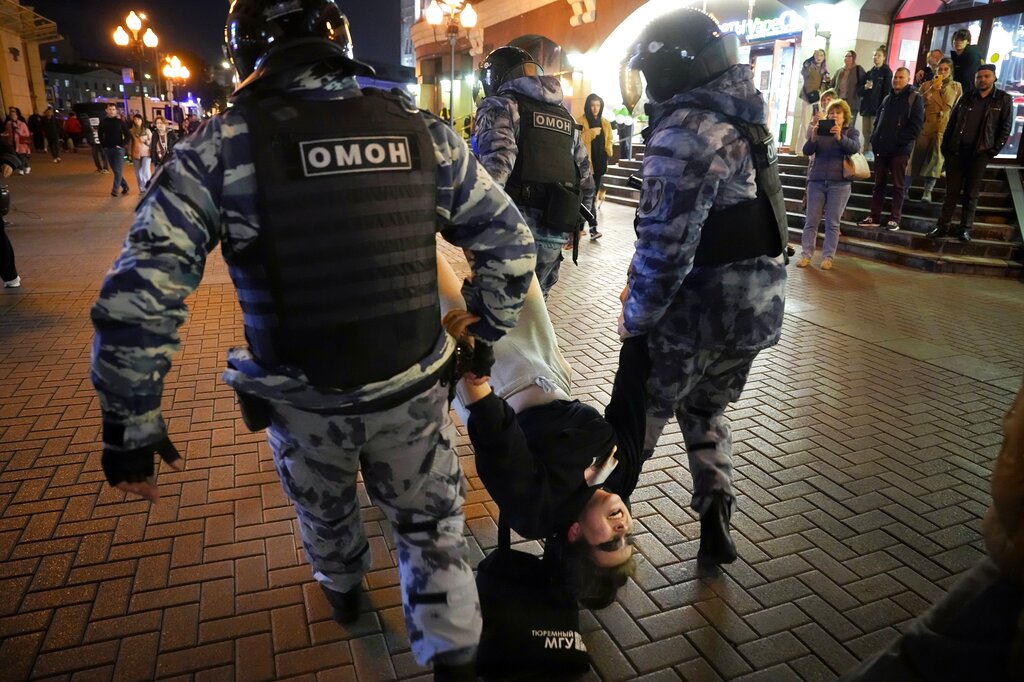 Russian riot police detain a demonstrator during a protest against mobilization in Moscow (AP Photo, File)

It is important that we take the time in this Council to mark International Human Rights Day, which we celebrated globally on December 10.

Russia’s brutal war against Ukraine puts into stark relief the imperative to stand up for universal human rights.  Russia’s brutality is not limited by borders, as this year’s Moscow Mechanism reports made clear.  Indeed, within Russia itself, we have seen the Kremlin further strip away respect for the human rights of its own citizens, including by introducing draconian laws outlawing all forms of anti-war expression. For LGBTQI+ persons and their allies in Russia, new legislation adopted this month further limits freedom of expression by banning the portrayal of LGBTQ+ relationships —effectively banning an entire category of people from the public arena.

As Russia seeks to exclude independent voices of all kinds, it is important to reflect on December 10, 1948, when the United Nations General Assembly adopted the Universal Declaration of Human Rights affirming that “all human beings are born free and equal in dignity and rights.”  The same principles have been enshrined in the Helsinki Final Act, adopted by every participating State in this chamber.  All persons have these rights and should be free to exercise them, without discrimination, no matter what they believe, whom they love, or where they live.  All means all.

The United States takes seriously our obligations and commitments to uphold human rights, and while we know we are far from perfect, we strive to improve and welcome fora such as the Human Dimension Implementation Meeting or the Warsaw Human Dimension Conference as venues to discuss with civil society how we can improve.

The United States also promotes accountability internationally through a range of tools, including the Global Magnitsky sanctions program as well as designations, with associated visa restrictions, under the State Department’s annual appropriations act, on dozens of individuals and entities connected to corruption and human rights abuses and violations.

As long as human rights challenges remain across the OSCE region, we will take steps to address them and to promote respect for our shared commitments.  On Human Rights Day the United States has designated officials throughout Europe and Eurasia for their involvement in human rights violations and abuses.  We call for the end of reprisals against, and the release of all those incarcerated for, in the words of the Helsinki Final Act, “knowing and acting upon their rights.”  These include: activist Bakhtiyar Hajiyev in Azerbaijan; democracy champions Vladimir Kara-Murza, Aleksey Navalny and Ilya Yashin in Russia; journalist Ihar Losik and his wife Darya Losik, democracy activists Ales Bialiatsky and Maria Kalesnikava in Belarus; and journalist Bolot Temirov in the Kyrgyz Republic.  We also remain concerned by the disappearance of Turkmenistan’s former OSCE Permanent Representative, Batyr Berdiev, and the lack of information about him.

I can’t mention political prisoners in the OSCE region without reminding this Council of the fact that the human rights situation in Belarus remains dire.  Close to 1,500 political prisoners are still being held, and the numbers keep rising.  These are Belarusian citizens who were arrested, and reportedly often beaten and tortured for having the bravery to protest that the 2020 presidential election was neither free nor fair and for exercising fundamental freedoms.  Some of these citizens are being detained and tortured for the innocuous reason that they wore red and white colors in a public space.  Journalists, media actors, democratic opposition figures, human rights defenders, and ordinary Belarusians have been sentenced in some cases to well over two decades of imprisonment simply for exercising their human rights.

We applaud the work of the Representative on Freedom of the Media to help participating States, including my own, uphold their commitments.  We also applaud ODIHR for their work training human rights defenders and reviewing draft legislation to ensure all participating States have the legislative framework and the civil society capacity to uphold their OSCE commitments.