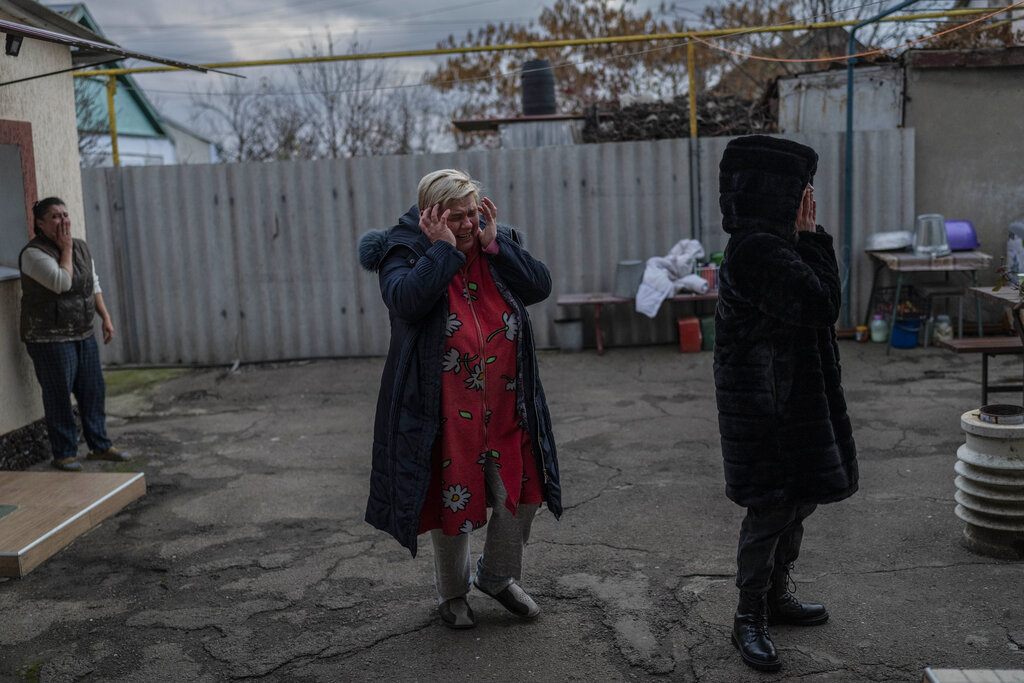 Natalia Voblikova, center, reacts after knowing that her son Artur was seriously injured after a Russian strike in Kherson (AP Photo/Bernat Armangue)

On International Humanitarian Law in the OSCE Region

To the Joint Meeting of the Forum for Security Cooperation and the Permanent Council, Vienna
November 23, 2022

The topic of International Humanitarian Law could not be any more relevant to what is happening in the world today because we are currently witnessing one of the most egregious and systematic attempts to violate international humanitarian law since the Second World War.  Russia isn’t just waging a war of aggression against Ukraine.  It is deliberately attacking civilian targets and civilian infrastructure with no military purpose whatsoever.  These are not merely lapses.  They are not exceptions to the rules.  These are atrocities.  Russian military barrages have left innocent Ukrainians without heat, water, and electricity.  Russian forces have attacked schools. Children have been killed.  And hospitals bombed.  Centers of Ukrainian history and culture reduced to rubble. Russia has killed thousands of civilians in Ukraine, according to the UN, and more than 7 million Ukrainian refugees have fled to other countries.

These actions have turned Russia into an international pariah. While Russia’s leadership may think such monstrous behaviors give them an advantage on the battlefield, such actions have only strengthened the will of the Ukrainian people to defend their families and the will of the international community to stand by what’s right and decent.  Rather than making Russia’s military look formidable, such depraved behaviors only sap the morale of Russia’s own troops, who witness their colleagues and commanders routinely committing or ordering the most horrendous acts.  This savagery will have long term consequences not just in Ukraine, but in Russia, where these soldiers will return to their communities bearing these stains on their conscience for the rest of their lives. They also cast a permanent mark of shame on every single one of Russia’s representatives who tries to justify or downplay such appalling behaviors.

While Russian representatives in this Council often like to invoke history when delivering their statements, it seems that they have learned nothing from it.  History shows us that violations of IHL often unite a people in their resolve to triumph over the perpetrators.  Russia is learning the hard way, in front of the entire world, that their shameful and cowardly tactics in Ukraine will bring them only defeat.  Russia’s disastrous retreats from Bucha, Izyum, and Kherson left behind an appalling trail of murder, summary executions, and torture.  They also abandoned their own dead and wounded along the roadside like chaff as they left.  Such is Russia’s disregard for human life. Contrast this with Ukraine’s decorated combat medic Yulia Paievska, better known as Taira, who when asked whether she would treat injured Russian prisoners of war, responded: “They will not be kind to us. But I cannot do otherwise.” That is the most crucial distinction between the two sides engaged in this war.

Chairs,
For our part, the United States is deeply committed to fulfilling our obligations under IHL.  The United States fully supports the effective implementation of all aspects of the 1949 Geneva Conventions, upholds the Law of Armed Conflict in all military operations, and takes many additional steps to promote compliance by our partners, including vetting and training recipients of security assistance and monitoring how that assistance is used.  At the 33rd International Conference of the Red Cross and Red Crescent in 2019, the United States was proud to issue a Pledge to Strengthen Domestic Implementation of International Humanitarian Law in Military Operations.  We have upheld our pledge through effective programs within our armed forces to help ensure compliance.  In addition, the United States has sought to develop and implement good practices, supplementary to the requirements of IHL, that enhance the care for detainees and the protection of civilians in armed conflict.  The United States has also sought to share its legal interpretations and good practices with other States, non-governmental organizations, and the public, through, for example, the online publication of reports, military manuals, speeches, and working papers related to IHL.  As a case in point, in August, U.S. Secretary of Defense Lloyd Austin approved the Department of Defense’s Civilian Harm Mitigation and Response Action Plan to institute enduring improvements to the Department’s ability to mitigate and respond to civilian harm.

Chairs,
When participating States in this organization violate International Humanitarian Law, we have an obligation to expose their actions and hold accountable those who commit violations.  Parties to the 1949 Geneva Conventions undertake to enact any legislation necessary to provide effective penal sanctions for persons committing, or ordering to be committed, any of the grave breaches of the Conventions.  Each Party also is obligated to search for persons alleged to have committed, or to have ordered to be committed, such grave breaches, and bring such persons, regardless of their nationality, before its own courts.
The United States supports many international investigations and atrocity documentation efforts in Ukraine, including the two Expert Missions established by the invocation of the Moscow Mechanism, ODIHR’s project to track violations of international humanitarian law and international human rights law, the International Criminal Court’s investigations, the UN Commission of Inquiry on Ukraine, the UN Human Rights Monitoring Mission in Ukraine, the Joint Investigative Team coordinated through Eurojust, and of course Ukraine’s own Prosecutor General.  We also welcome proceedings before the International Court of Justice and are tracking Ukraine’s case against Russia before the European Court of Human Rights.  Finally, the U.S. Government has funded a Conflict Observatory, which is an independent entity and is based at Yale University and with the involvement of other non-governmental organizations, that is aggregating open-source information drawn from satellite imagery, social media, journalistic reporting, and other sources, to focus on various violations of international humanitarian law.  Beyond supporting documentation, investigation and prosecution efforts, we must all bear witness to these atrocities by speaking about them publicly in this Council so that we hold the Russian Federation to account for its heinous actions.

Chairs,
Given the enormity of the challenge posed by Russia’s war crimes in Ukraine, the United States is developing tools to better preserve and maintain battlefield evidence, including for the eventual use of that evidence in appropriate prosecution of individuals for crimes committed during armed conflict.  Development of these tools has taken on added urgency with each passing day.  We have reports of citizens being killed execution-style, with their hands bound.  We have bodies that show signs of torture.  We have horrific accounts of gender-based violence, including sexual violence against women and children.  Ukraine’s Prosecutor General’s Office has already identified thousands of incidents that may constitute war crimes—and this without yet knowing all that is unfolding in areas still under Russia’s occupation.

Russia’s breaches of international law also include the construction of a vast transnational infrastructure of filtration operations to which thousands of Ukrainian citizens have now been subjected.  There are compelling reports describing physical and psychological abuse, including summary executions, as part of these operations, and the forcible transfer and deportation, including thousands of Ukrainian children, who have been abducted and forcibly adopted by families within Russia.  What we’re seeing in these images, videos, and reports, including eyewitness accounts, suggest that these atrocities are not the acts of rogue units or individuals.  Rather, they are part of a deeply disturbing pattern of reports of abuse across all areas where Russia’s forces are engaged.  And they are also consistent with what we have seen from Russia’s military engagements preceding the Kremlin’s full-scale war in Ukraine.  This includes in Chechnya, in Syria, and in Georgia.

With support from the U.S. Department of State, Ukraine’s Prosecutor General’s Office is also receiving vital assistance from the International Commission on Missing Persons to help strengthen its forensic capacities to identify the missing and the dead, with the goal of ensuring evidentiary standards so that those responsible for committing war crimes and other atrocities will face justice and accountability.  The Department also supports the heroic efforts of Ukraine’s own civil society, including those by the Nobel Peace Prize Winner, the Center for Civil Liberties, to document war crimes and atrocities.

Just as the Allies at the end of the World War II advanced the imperative of justice and ushered in a new era of accountability for the worst imaginable crimes, it falls to us – including all of us in this chamber – to ensure that those responsible for war crimes and other atrocities in Ukraine are held to account.