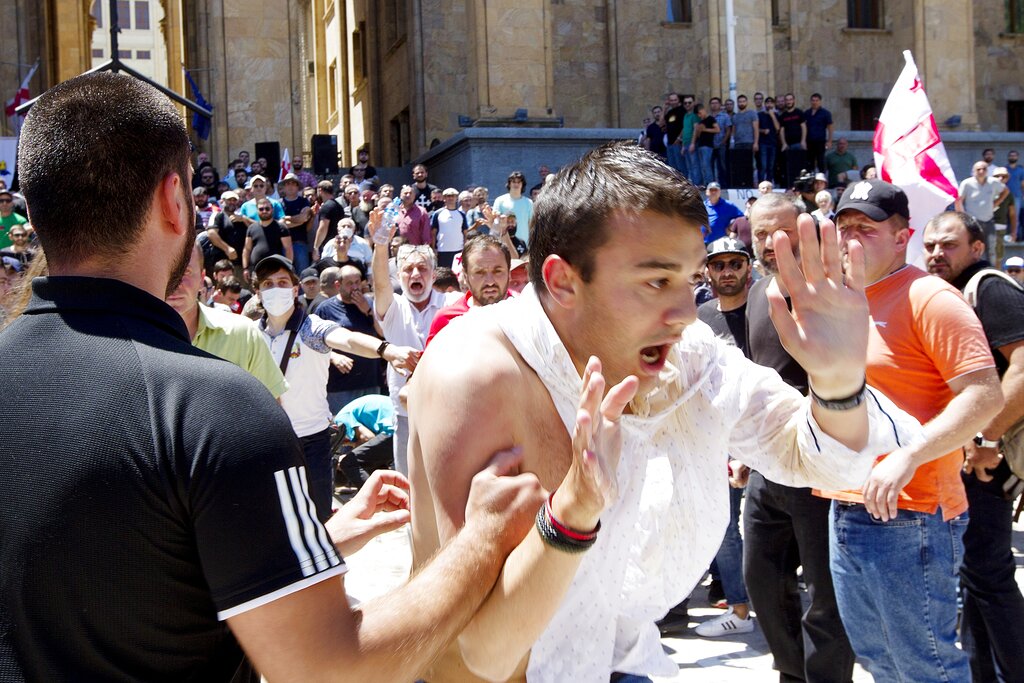 Opponents of the march push a man as they block off the capital's main avenue to an LGBT march in Tbilisi, Georgia, Monday, July 5, 2021. (AP Photo/Shakh Aivazov)

On July 5 Violence in Georgia

And I join others in thanking the delegation of Georgia for raising this proactively. We very much appreciate that.

I would like to call attention to the July 5 joint statement issued by the Mission of the United States, 17 other Embassies, as well as the European Union Monitoring Mission, the UN system in Georgia, and the European Union Delegation to Georgia condemning the recent violence in Tbilisi.

The attacks were committed by right-wing groups on July 5 and 6 in an effort to prevent the Tbilisi Pride march from taking place.  The attacks targeted civic activists, community members, and journalists who were peacefully exercising the rights guaranteed to them by Georgia’s Constitution.  The mobs went largely unchecked by authorities as they attacked citizens and also broke into and vandalized the offices of the Shame Movement, the Human Rights Center, and Tbilisi Pride, and attacked a long-term opposition tent protest outside of Parliament.

As in all democracies, Georgia’s leaders and law enforcement officials have a duty and responsibility to protect the Constitutional and human rights of all Georgians to freedom of expression and peaceful assembly, and to bring to justice those who commit violence against others peacefully exercising their rights.  Georgia’s authorities also have the responsibility to do their utmost to protect journalists conducting their work and citizens exercising their constitutional rights, and  to publicly condemn and prosecute acts of violence against them.  All persons in Georgia have a right to express their views, regardless of whether such views are in the majority or minority.  This is consistent with Georgia’s long history and tradition of defending human rights and basic freedoms.

All persons are born equal in dignity and rights.  Georgia, like every participating State, has the obligation to respect and protect the human rights of all persons in Georgia in accordance with international law and in keeping with OSCE commitments.

And, again, I would like to thank the Georgian Ambassador.