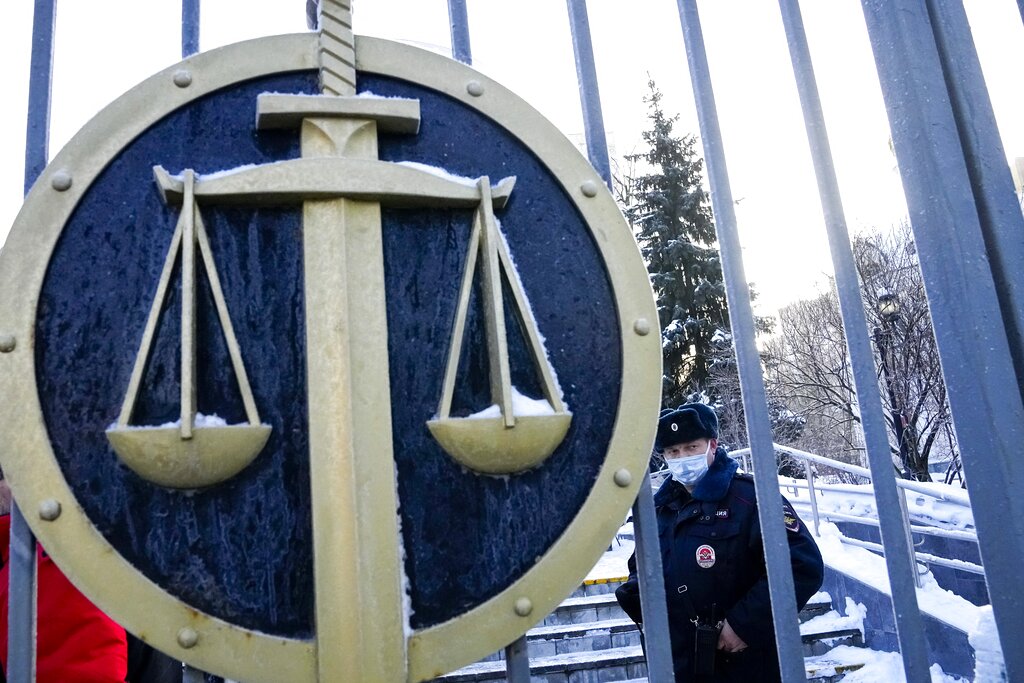 A court in Moscow has ruled to shut down another prominent human rights organization amid a sweeping crackdown on Russia's rights groups, independent media and opposition supporters. (AP Photo/Alexander Zemlianichenko)

On Media Freedom in the Russian Federation

to the Permanent Council, Vienna
February 10, 2022

Let me start by thanking my esteemed colleague from the European Union for raising this issue as, unfortunately, we continue to see worsening conditions for freedom of expression and media freedom in the Russian Federation.  It is increasingly clear any opinions that do not comport with the government’s official positions are silenced and fined out of existence.  Russia’s list of “media foreign agents” now includes 115 outlets and individuals, up from 17 at the beginning of last year.  The “foreign agent” laws that have been used to muzzle independent media, civil society, and opposition voices have now been bolstered by the misuse of laws against “extremism” to censor any investigative journalism that may paint the Russian government in a negative light.

Just last week, the Russian state media monitoring agency, Roskomnadzor, threatened to block eight websites of Radio Free Europe and Radio Liberty if they did not remove stories about investigations that uncovered apparent corruption at the highest levels of the Russian government.  These websites provide critical independent voices not only within Russia, but also within Central Asia and Ukraine. Since the investigations were initially carried out by the team of Alexey Navalny, whom the Russian government has now incredibly labeled a terrorist, Roskomnadzor undertook to censor RFE/RL on specious claims that the outlets supported “extremism” by having published Navalny’s findings.  Russia leveled these charges against more than a dozen independent Russian outlets, including Novaya Gazeta, whose editor won the Nobel Peace Prize last year for his work protecting freedom of expression.

Unfortunately, this is just the latest in a long line of misleading and unsound claims the Russian government has leveled against RFE/RL in an attempt to stifle objective journalism.  Having already smeared RFE/RL with the “foreign agent” label, Roskomnadzor has fined the outlet over $13 million for failing to apply the necessary “warnings” to its content online.

We once again call on Russia to live up to its commitments to human rights as outlined in the Universal Declaration of Human Rights, the International Covenant on Civil and Political Rights, and the Helsinki Final Act, including the right to freedom of expression.  Continuing attempts to silence independent voices through fantastical claims of extremism run directly counter to the Russian Federation’s OSCE commitments.