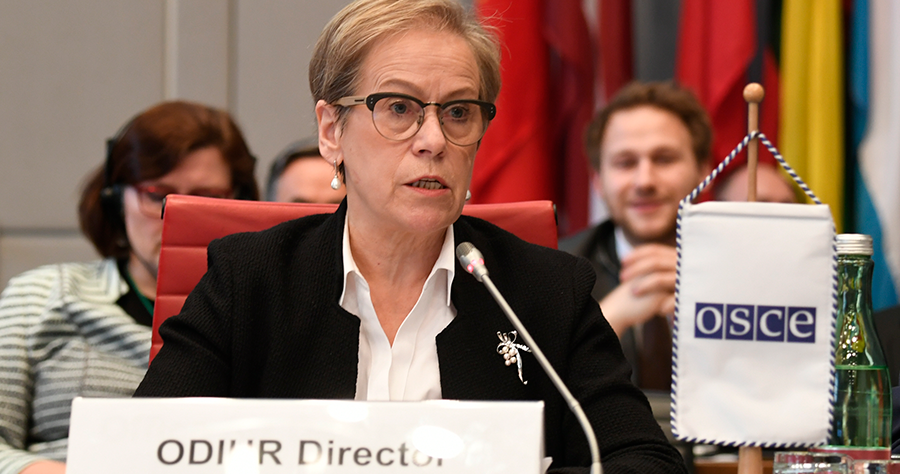 OSCE Office for Democratic Institutions and Human Rights (ODIHR) Director Ingibjörg Sólrún Gísladóttir presents her report on recent activities and findings from ODIHR to the Permanent Council on March 7, 2019.

Madam Director, the United States welcomes you warmly back to the Permanent Council. We value your insights on the state of democratic institutions and human rights in the OSCE region. I commend you and ODIHR’s high-performing team for the quality work that you produce throughout the year.

Madam Director, the United States shares many of your concerns regarding developments in the OSCE area, where the space for independent voices and civil society activity is unfortunately shrinking, as you noted. Some participating States attempt to justify their violations and abuses of human rights and fundamental freedoms in the name of countering terrorism or violent extremism. Hate crimes are on the rise in the region, as are many other forms of intolerance, discrimination, racism, and xenophobia. ODIHR carries out its vital mandate in ever more challenging circumstances.

The Human Dimension of security is integral to the OSCE’s comprehensive security concept. Respect for human rights and democratic principles of government within states is essential to lasting prosperity and peace among states. All states must exhibit the necessary political will and put forth the resources to uphold our OSCE commitments in the Third Dimension, which ODIHR’s mandate so strongly supports.

Madam Director, ODIHR’s annual report illustrates the broad scope of ODIHR activities. Considering the available resources, this is a testament to ODIHR’s efficiency and expertise.

We strongly value the important role that ODIHR election observation missions play in assessing election conformance and election-related commitments, and we will continue to strongly support such efforts in the future.

The United States is also proud to support other programs, including those that combat hate crimes, fight trafficking in persons, engage Roma and Sinti youth, and bolster democratic elections. With regard to combating human trafficking, we look forward to the update of the National Referral Mechanism later this year. We further endorse your inclusion of women’s rights and gender equality as issues that cut across both geography and dimension and should thus be integrated into every aspect of our work. On this issue, Madam Director, you and your organisation lead by example, as demonstrated by your efforts to promote equal opportunity for women both in ODIHR election observation missions and in staff recruitment – and thank you very much for those concerted efforts.

Madame Director, we also support ODIHR’s organizing of timely Human Dimension events and its activities throughout the year, including the annual implementation meeting in Warsaw. The United States will continue to champion civil society’s access to and participation in these important events.

Madam Director, we congratulate ODIHR on the important work you do to combat intolerance in all its forms and to encourage participating States to take action to prevent and prosecute hate crimes, including by respecting our commitments in Ministerial Decision 9/09.

Programs that reduce intolerance and discrimination have proven effective in preventing hate crimes. For example, ODIHR’s Words into Action program has effectively helped communities combat anti-Semitism. It is important that this carefully designed program and other programs of this type continue.

Madam Director, let me reiterate the United States’ strong support for ODIHR and the work that you do. Let me also reaffirm that the United States will work with you, the Slovak Chairmanship, and other concerned participating States to strengthen ODIHR and to defend its autonomy, its mandate, and its budget.