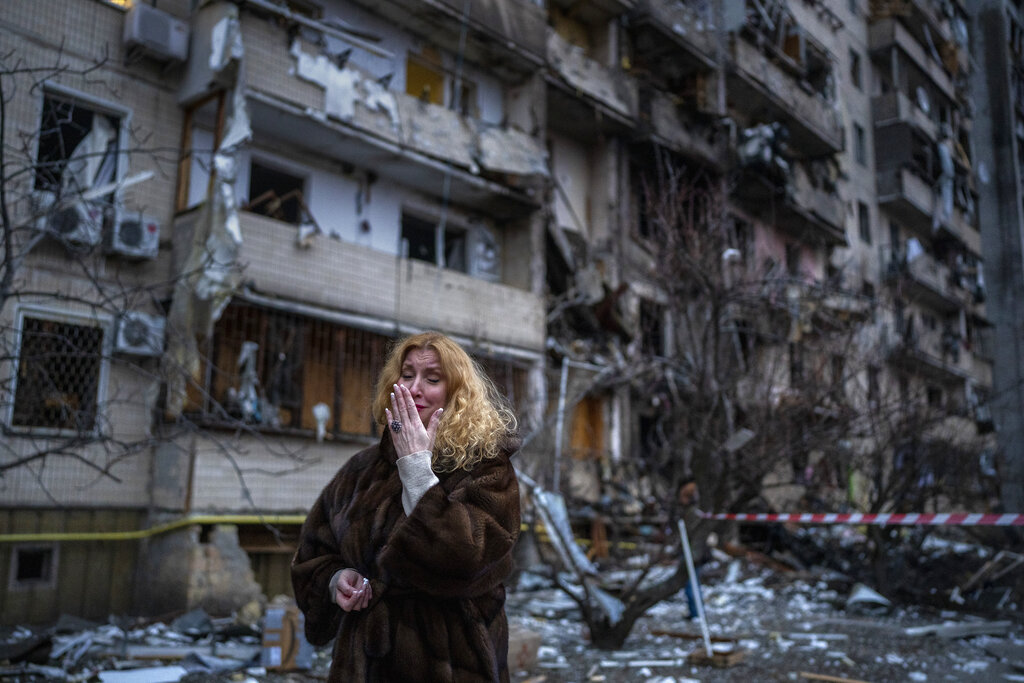 On Ongoing Aggression by Russia Against Ukraine

to the Permanent Council, Vienna
February 27, 2022

A tyrannical regime is waging a premeditated war against a peaceful nation. And now we are witnessing the results of Russia’s aggression against Ukraine: civilian deaths and wanton destruction of civilian infrastructure – apartment buildings, kindergartens, orphanages. Children are huddling cold, hungry, and scared in crowded metro stations. It is cruel. It is barbaric. It is unconscionable.

This organization was founded on principles.  Principles enshrined in the Charter of Paris, the Helsinki Final Act, and the UN Charter.  Over the last few months, the Russian Federation has rejected every single one of these principles. Instead, it has chosen war. It has chosen aggression. It has chosen to violate international law.

We appealed so many times – all of us in this Council – for dialogue and diplomacy. Our appeals were met with lies and silence. At some point, down the road, we will need to think about what this means for our diplomatic efforts to support peace and security in Europe.  How do we rebuild our collective security when we do not share even the most basic norms of civilized discourse? How do we reason with a regime that claims the Ukrainian nation does not exist? How do we reach agreements when the Russian Federation so blatantly and brutally violates international law?

Despite the interpreters who translate our words into so many different languages, the words spoken by the Russian Federation’s representative have no meaning. They do not correspond to the reality that we are all witnessing. That reality is that the democratically-elected President of Ukraine, who happens to be a native Russian speaker, is bravely standing his ground as Russian tanks and troops advance on Kyiv to forcibly remove him from power.

Last night I received a text from a former Member of Ukraine’s Parliament, who is now in Kyiv.  She writes: “We do not know for how long we can stand, but be sure that after eliminating independent Ukraine, Russia will not stop, as all the redlines and psychological barriers have been crossed.”  Those were her words.  Now we hear Russia threatening Finland and Sweden with “military and political repercussions.”  Those are the Kremlin’s words.

Dear colleagues, this is madness.

We are not witnessing a clash of ideologies or worldviews. It’s much more basic than that. It’s about peace versus war. Dictatorship versus democracy. Truth versus lies. And it extends far, far beyond Ukraine.

Our immediate task has to be mobilizing resources to deal with the massive human and humanitarian tragedy playing out before our eyes. Kyiv, a city of nearly three million innocent men, women and children, is being encircled. Let us recall what Russian forces did together with their Syrian allies to the city of Aleppo just six years ago.

Tens of thousands of refugees have already fled Ukraine and many more will leave in the coming days. There are even more internally displaced people inside Ukraine and that number too will grow. We must help them. Ukrainians need food, water, shelter, and medicine.

And yes, they also need the means to defend themselves. Yesterday, Secretary Blinken announced that the United States will be providing another $350 million worth of lethal security assistance to Ukraine. It’s the right thing to do. It’s what we need to do to support freedom in Ukraine and freedom around the world.

Over time, we must also meticulously document the Russian Federation’s abuses, the civilian casualties the Russian Federation is causing, and any possible war crimes it commits to ensure there is accountability.  This is a dark time, but when the fog of war clears, individuals will be held responsible.  We are also taking note of all those enabling this war, including the regime in Belarus, and they too will be held to account.

Mr. Chair, I salute the heroic efforts by Ukrainians from all walks of life who are defending their country, their freedom, and their way of life. They deserve our strongest possible support.  I also want to join the Chair in expressing my condolences to all the victims of this appalling aggression by the Russian Federation.

Mr. Chair, I request this statement be attached to the Journal of the Day.