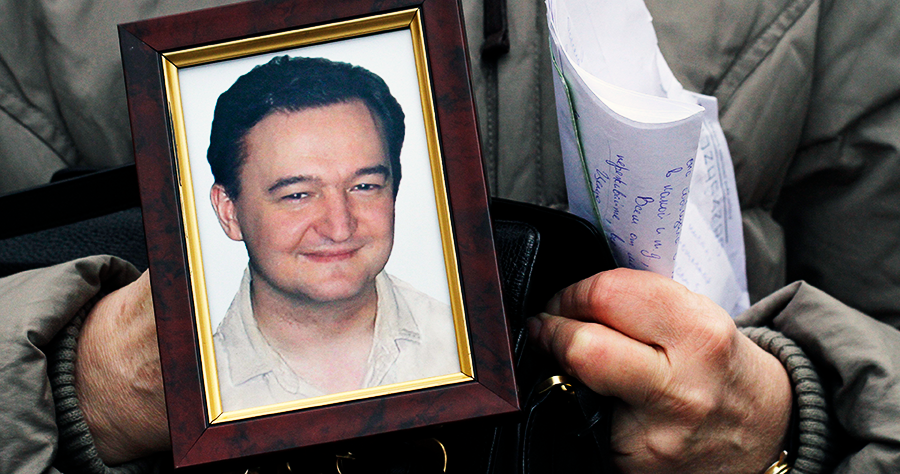 In this Nov. 30, 2009, file photo a portrait of lawyer Sergei Magnitsky, who died in jail, is held by his mother Nataliya Magnitskaya, as she speaks during an interview with the AP in Moscow. (AP Photo/Alexander Zemlianichenko)

Ongoing Human Rights Violations and Abuses by the Russian Federation

As delivered by Political Counselor Gregory Macris
to the Permanent Council, Vienna
November 14, 2019

Over the past several months, the Russian government has escalated its attacks on independent civil society and perceived political opponents, using a host of administrative tactics to deprive Russians of the ability to exercise their human rights.  The United States is troubled by Russia’s failure to uphold its OSCE commitments on respect for the fundamental freedoms of expression, assembly and association, and religion or belief.

We urge the Russian government to cease the politically-motivated prosecution of several participants in this summer’s election-related protests when thousands of people in Moscow and other Russian cities took to the streets to exercise their rights of freedom of peaceful assembly and to stand up for free and fair elections.  We note in particular the case of Konstantin Kotov, who is now serving a four-year prison sentence for multiple “violations of protest regulations.” In fact, Mr. Kotov did nothing more than peacefully take part in demonstrations to oppose the government’s policies.

Russia uses its law on so-called “foreign agent” organizations and other legal and administrative resources to narrow the operating space for independent civil society organizations.  We echo the sentiment expressed in a November 7 European Union statement concerning Russia’s November 1 decision to dissolve the For Human Rights movement, purportedly for multiple violations of the “foreign agent” law.   For Human Rights is one of the country’s oldest and most respected human rights organizations.  We are also concerned by reports that the State Duma is considering legislative changes that would allow the government to declare not just non-governmental organizations, but also individuals to be “foreign agents.”

On November 7, a Russian court dissolved the Center of Support for Indigenous Peoples of the North for purported technical violations of NGO regulations.  This year alone, authorities have filed at least 20 complaints against the renowned human rights NGO Memorial for purported violations of the “foreign agent” law, resulting in thousands of dollars in fines assessed on spurious grounds.  Memorial’s Karelia branch director, the respected historian Yuri Dmitriyev, remains in prison facing trial on baseless and politically motivated charges despite having been acquitted of those same charges last year.

Russia is increasingly targeting individual citizens who express dissent on the internet.  A troubling new “sovereign internet” law took effect on November 1, which gives the government the authority to disconnect Russia from the global internet and authorizes even more government filtering of internet traffic.  We urge Russian authorities to respect their citizens’ right to freedom of expression.

We are dismayed by the continued repression of the Jehovah’s Witnesses and members of other religious minority groups in Russia.  On November 5, a court sentenced Sergey Klimov to six years in prison simply for exercising his beliefs, making him the eighth Jehovah’s Witness jailed in Russia for peaceful religious practice.  There were around 100 raids on Jehovah’s Witnesses’ homes and places of worship in October alone, a new and sad record. Russia should cease the politically-motivated detentions, raids, and harassment of this and other peaceful religious groups and uphold its international obligations and OSCE commitments to respect religious freedom.

Finally, on November 16 we will honor the memory of Russian whistleblower Sergei Magnitsky, who died ten years ago in a Moscow pre-trial detention center after authorities there denied him treatment for serious medical conditions and subjected him to physical abuse.  Magnitsky was imprisoned in retaliation for exposing a major tax fraud scheme perpetrated by Russian officials. He was imprisoned by those whose crimes he uncovered.

Years later, there is still no justice for Sergei Magnitsky.  Russian authorities have not only failed to hold anyone to account for his tragic death and the crimes he uncovered but have also engaged in efforts to spread ever-expanding conspiracies designed to discredit Magnitsky’s brave actions and distract from the grave injustice of this case.