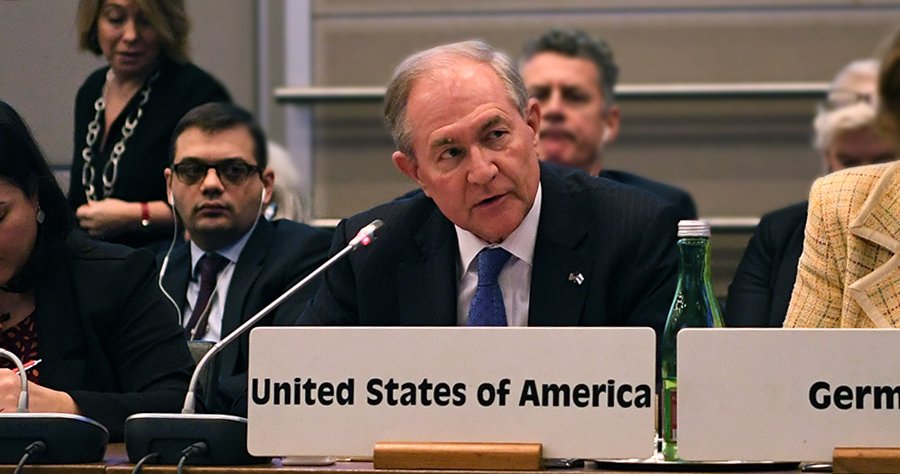 U.S. Ambassador to the OSCE, James S. Gilmore III, responds to the remarks and priorities delivered by the 2020 OSCE Chairperson-in-Office Albanian Prime Minister Edi Rama at the Permanent Council on January 9, 2020. (USOSCE/Gower)

We also join our colleagues in expressing our concerns over the airline crash that has occurred — sentiments that I have expressed directly to the Permanent Representative from Ukraine. We are concerned very much about the families and the tragedy that has occurred.

Prime Minister Rama, the United States welcomes you to the Permanent Council as Albania assumes the OSCE Chairmanship for 2020 and congratulates you on the insightful discussion that you had in your opening remarks regarding the progress of Albania over the years historically. At the outset, I wish to commend Albania for its strong statement of support on January 3 and its forceful rejection of Iran’s campaign of violence and terrorism against Americans and United States’ interests. Mr. Prime Minister, that is a clear example of leadership in difficult circumstances and bodes well for Albania’s chairmanship. The United States has respect for the leadership of the OSCE in standing for peace and freedom and security in Europe and far beyond.

Turning to the incident in question on the borders of the OSCE countries, and in fact in the center of the Partners of Cooperation region, my government took action on January 2 in the United States’ self-defense in response to armed attacks by Iran and certain Islamic Revolutionary Guard Corps Qods Force-supported militia forces against the United States. Only after repeated warnings to the Iranian regime—both public and private—to cease its targeting of U.S. persons and interests, did President Trump take action to defend American lives.

On January 7, Iran launched more than a dozen ballistic missiles against the United States and coalition military personnel in Iraq. Although the attack caused no casualties, Iran’s actions threatened not only American lives, but also those of our partners and allies. In light of these attacks, the United States will immediately impose additional, punishing sanctions on the Iranian regime. Our sanctions will remain in place until Iran changes its destabilizing behavior in the region. Iran appears to be standing down, which is a good thing for all parties concerned. The United States will remain in the region, and further attacks by Iran or its proxies on U.S. interests will result in serious consequences for Iran.

For too long – all the way back to 1979 – nations have tolerated Iran’s destructive and destabilizing behavior in the Middle East. We strongly urge the community of nations to publicly condemn Iran’s actions. Peace and stability cannot prevail in the Middle East as long as Iran continues to foment violence, and unrest, and hatred, and war. The United States does not seek war with Iran. As the President has stated, the United States is ready to embrace peace with those who seek it. The President stands ready to talk to Iran without pre-conditions.

Prime Minister Rama, we laud your approach to the OSCE’s core values. 2020 marks the 45th anniversary of the Helsinki Final Act and the 30th anniversary of the OSCE’s Paris Charter—a time for all OSCE participating States to recall our shared goals for this organization and to focus on implementing the commitments that underpin our comprehensive security.

Today, one participating State is contravening nearly all of the principles that we adopted 45 years ago. Across the OSCE region, Russia tests our collective resolve through repeated and blatant contraventions of the tenets we committed to in 1975 and reaffirmed in 1990, from respect for the sovereignty and territorial integrity of other participating States, to human rights and fundamental freedoms. In eastern Ukraine, Russia has created the most serious security crisis in Europe since the end of the Cold War.  In Crimea, Moscow actively targets those who oppose its occupation, particularly Crimean Tatars and ethnic Ukrainians.  As Secretary Pompeo made clear in his 2018 Crimea Declaration, we will never recognize Russia’s attempted annexation of Crimea. Until this occupation ceases and a peaceful and just resolution is reached, the United States will work with partners across the international community to hold Moscow accountable.

OSCE participating States established the Special Monitoring Mission to serve as the international community’s eyes and ears throughout Ukraine. Every week we see new evidence of Russia’s campaign to intimidate, constrain, and degrade that Mission.  We owe it to the SMM leadership, our monitors, the Ukrainian people, and to everyone interested in European security to ensure that the Mission’s important work continues unabated and without harassment.

Russia’s occupation of Abkhazia and South Ossetia contravenes its OSCE commitments and violates Georgia’s sovereignty, independence, and territorial integrity within its internationally recognized borders.  In Moldova, while Russia participates in the 5+2 Transnistria settlement negotiations, it refuses to fulfill its 1999 Istanbul OSCE Summit commitment to withdraw its forces.  We urge the Albanian Chair and all participating States to support avenues to peace in these countries and the broader region. Continued strong support for the Minsk Group process on the Nagorno-Karabakh conflict is also a crucial part of these efforts.

Our commitment to human rights and fundamental freedoms is unwavering. We encourage all States to condemn and combat religious, ethnic, racial, and other forms of hatred on the rise in the OSCE region. We are particularly concerned about the increased use of so-called “foreign agent” and “anti-extremism” laws to target non-governmental organizations, human rights defenders, and other civil society actors for exercising freedoms of expression, peaceful assembly and association, and religion or belief. We will spotlight the plight of political prisoners and welcome others who join us in this effort. We will call attention to disinformation campaigns and other malign attempts to undermine democratic systems of government and independent civil society.  We urge the Albanian Chairmanship to work with ODIHR to maintain robust civil society access to the Human Dimension Implementation Meeting and other OSCE fora.  We look forward to learning more of Albania’s priorities for the Economic and Environmental dimension and how your priorities would enhance security across the OSCE region.

Mr. Prime Minister, the United States will work closely with the Albanian Chairmanship to defend OSCE mission mandates and further, to foster implementation of our collective decisions. Over the coming year we are confident that Albania will lead by example, demonstrating that it is working hard to shed the vestiges of authoritarianism and defend the principles that underpin our comprehensive and shared security. We wish you every success in 2020, Mr. Minister, and you can count on our support and cooperation for the success of your Chairmanship.