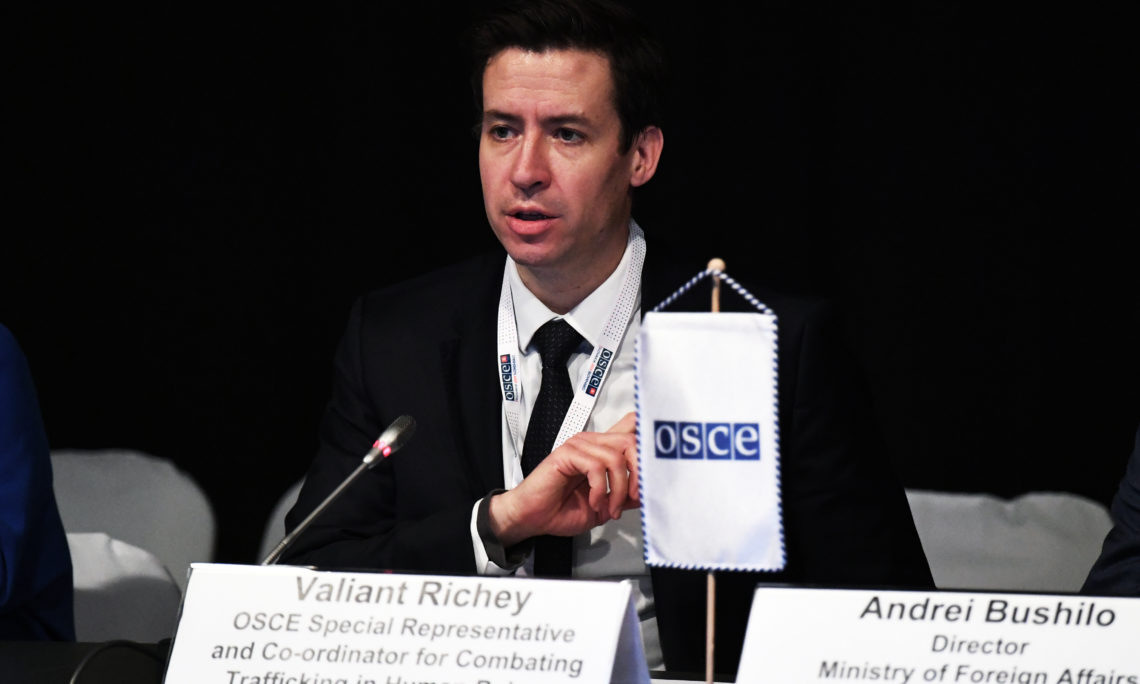 John, thank you very much.

I have come in late because of some additional governmental meetings that we were having, but I think that this is such an important topic that it was important for me to break away and come here and be a part of this. We are grateful for everybody who is here in the room, who is participating in this very significant event.

I think that Katarzyna’s testimony was a very powerful one. It was certainly impressive to me. My wife is an ancient historian, and she has been talking to me about this issue of human trafficking and it is quite ancient in its origins. It’s only now that modern people, with modern ways, using modern technology and modern standards and values, that we are actually beginning to confront this terrible problem that you have pointed out with the size and the numbers. So, I think that what we are really about the business of doing here is advancing civilization, really. Advancing the standards of modern conduct. So I congratulate you, and I congratulate everybody who is here and I am honored to be here today, on the margins of the Ministerial here in Bratislava.

This year’s OSCE co-chairmanship of the United Nations Inter-Agency Coordination Group (or ICAT) is the first time that a non-UN agency is co- chairing the group. This offers the opportunity to highlight the groundbreaking work of the OSCE and to bring a regional perspective to ICAT, but also to encourage other regional multilateral organizations to join and be active members of ICAT.

I want to commend OSCE Special Representative and Coordinator on Combating Trafficking in Human Beings Val Richey – Val, thank you very much. We are very grateful for your leadership and for highlighting within ICAT the key issue of human trafficking prevention and mitigation in procurement supply chains, and for sharing the OSCE’s progress in implementing its commitments in this regard. This is an economic tool of leverage that we have at our disposal, and I am grateful for you pointing it out and bringing it to fruition, both for public procurement and for procurement inside the OSCE.  We applaud his efforts – Val’s efforts – to leverage the OSCE’s chairmanship of ICAT to engage with the United Nations Procurement Network. This shows the valuable contribution that a regional security organization can make to the work of ICAT.

We wish the Special Representative and his team continued success as the OSCE, together – by the way – with UN Women, continues its co-chairmanship of ICAT in 2020. That is very significant, particularly with the report that we have just heard regarding the impact that this has on women worldwide.

More importantly, the OSCE is also the first multilateral organization to actually implement policies and preventive measures in its institutional supply of goods and services. It places the OSCE at the forefront among intergovernmental organizations.

For these reasons, we avail ourselves of every opportunity to highlight these OSCE commitments and encourage other multilateral organizations to follow suit – such as the Organization of American States or the Bali Process on People Smuggling, Trafficking in Persons and Related Transnational Crime.

We hope that other participating States will join this effort by adopting similar political commitments in other regional forums where they have membership, thereby increasing global reach to prevent forced labor in global supply chains.

As for the United States, we recognize our own responsibility.  The U.S. government spent more than $550 billion on goods and services in 2017. This gives the United States significant financial leverage and policy options in our efforts to prevent workers from being exploited in our own supply chains.

We recognize that we have to map and understand and address the risks throughout our supply chains because traffickers can target vulnerable workers anywhere along a supply chain. Risks are present in both the production of goods and in the service sector – and we know that industries such as agriculture, electronics, and the extraction industries are as risky as construction, facilities management, and healthcare. All of these supply chains can be exploited.

The United States has had a long policy prohibiting government employees and contractor personnel from engaging in trafficking in persons, the contractors that do business with the United States..  This policy was strengthened in 2015 when the Federal Acquisition Regulation rule – that’s called the FAR in government terms – “Ending Trafficking in Persons,” was issued and added additional trafficking-related prohibitions for federal contractors and subcontractors. These people that do business with the United States have to make a certification into not engaging in this kind of abuse in their supply chains.

These regulations apply to all government contracts and prohibits contractors and subcontractors from engaging in these practices, such as charging employees recruitment fees, confiscating an employee’s identity documents, and using fraudulent recruitment tactics.

This fall, the U.S. government released guidance and ‘best practices’ to assist federal contractors and acquisition personnel in implementing those regulations.  Separately, in 2018, a new rule providing an official definition of “recruitment fees” was published to clarify the term—you know, recruitment fees, they charge you a fee, and then all of the sudden the people have got control of you—given the existing prohibition on charging these fees, which have been known to lead to debt bondage.

The State Department provides resources and tools to assist U.S. federal contractors, procurement officials, and other companies to better address the risks of human trafficking in their supply chains, and to develop effective risk-management systems. Now, we do this through our online Responsible Sourcing Tool, which includes an examination of 11 key sectors and 43 commodities at risk for human trafficking, as well as 10 comprehensive risk-management tools. So, processes can be put into place to leverage these supply chains and this financial leverage, in order to try to help this problem.

The United States seeks to elevate at the global level the focus on due diligence in supply chains.  Last year, at the margins of the UN General Assembly, the State Department of the United States announced, together with the governments of Australia, Canada, New Zealand, and the United Kingdom, the “Principles to Guide Government Action to Combat Human Trafficking in Global Supply Chains,” which provides a framework for governments to build a strategy to take effective action to prevent and eradicate human trafficking from these supply chains. Supply chains become a method of economic leverage that governments can use.

We view the OSCE’s Model Guidelines “On Government Measures To Prevent Trafficking” developed by Special Representative Richey’s Office with the expertise of participating States, including the United States, as a very useful tool to assist governments in implementing the “Principles to Guide Government Action” that I just mentioned.

Now, we hope that all OSCE states will do their utmost to contribute to the further development and implementation of these kinds of preventive measures – that will eventually form a defense against forced labor in global supply chains.  Our collective goal has got to be to eliminate and eradicate forced labor from the global economy through this method.