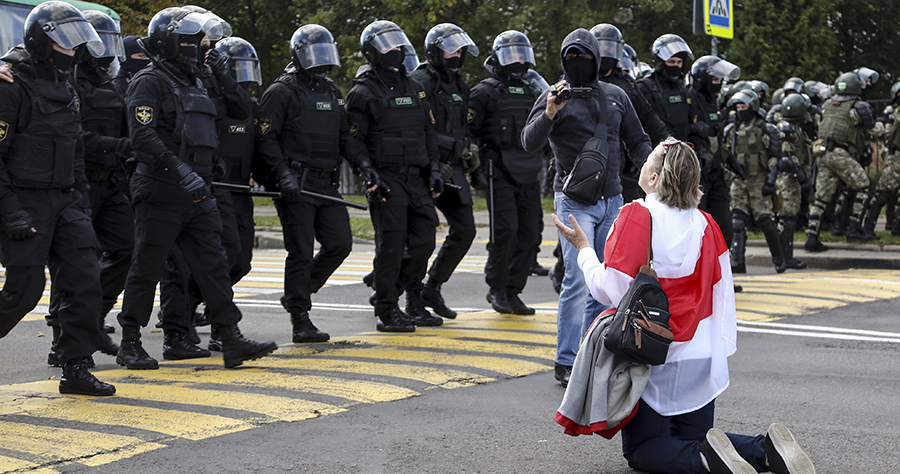 A woman covered herself by an old Belarusian national flag kneels in front of a riot police line as they block Belarusian opposition supporters rally in Minsk (photo: TUT.by via AP)

On Recent Development in Belarus

We recognize the courage of the protesters and opposition leaders in Belarus who, despite brutal efforts to intimidate them, peacefully assert the Belarusian people’s right to choose their own leaders in a free and fair election with international observation.  The intimidation tactics include the Belarusian authorities’ shameful threat on September 13 to strip parents of custody rights should they bring their children to protests.  We are particularly alarmed by many credible reports of beatings, torture, and other cruel, inhuman, or degrading treatment or punishment of detainees.

The recent series of politically motivated detentions, forced exiles, and abductions of National Coordination Council members is particularly troubling.  I would like to highlight a few examples of unjustly detained opposition leaders and journalists in Belarus.

On September 7, in broad daylight in the center of Minsk, Maryia Kalesnikava, a member of the Coordination Council, was seen being bundled into a van marked “Communications” by plain-clothed men.  Ms. Kalesnikava was taken into the Belarusian Border Committee’s custody.  She reportedly tore up her passport at the border to prevent her expulsion from Belarus into Ukraine.  An amazing act of Belarusian patriotism. Ms. Kalesnikava is now in detention.  We call on Belarusian authorities to release her.  Two other members of the Coordination Council, Anton Radniankou and Ivan Krautsou, were abducted and forced across the border into Ukraine against their will.

On September 9, while in the office of the National Coordination Council, Maxim Znak, a Council member, was forcibly removed by masked men.  Mr. Znak is a lawyer who previously defended unjustly arrested and jailed presidential candidate Viktar Babaryka.  We call on Belarusian authorities to release Mr. Znak.

As of today, all but one of the seven members of the leadership of the Coordination Council, in addition to the Council spokesperson and executive secretary, have either been detained, arrested, threatened into exile, or forcibly expelled from Belarus.  And presidential candidate Svitalana Tsikhanouskaya fled to Lithuania out of fear for her safety.

These threats, violence, and impunity must end.

By their repressive actions, the Belarusian authorities are only plunging their country deeper into crisis.

I will repeat Deputy Secretary of State Biegun’s call during our August 28 Special Permanent Council Meeting, “we urge the Belarusian authorities to accept the OSCE Chairmanship’s offer to facilitate a national dialogue aimed at resolving the political crisis in Belarus.  Cooperation with the OSCE would send a positive message about the authorities’ intentions toward the Belarusian people.”

Let me be clear.  This is a matter between the people of Belarus and Alexander Lukashenka.  Nobody else from the outside.  This is a historic opportunity for Alexander Lukashenka to secure his place in the history of Belarus.  It does now appear that the people of Belarus no longer accept living in a society, where there is no democracy, and no honest, free, open and genuine election. The question now, is what role Mr. Lukashenka will play in the future of Belarus.  We call on Mr. Lukashenka to end repression, free detainees, allow exiles to come home, and work with the OSCE.  Establishing an authentic dialogue with genuine representatives of Belarusian society to hold new free and fair elections with robust ODIHR observation can secure Mr. Lukashenka both a place in history and the recognition of the international community.

Finally, Mr. Chairman, my government calls once again for the release of U.S. citizen Vitali Shkliarov.  On July 29, while buying a watermelon for his mother during a visit to his parents in Homiel, Belarus, Mr. Shkliarov was detained.

Mr. Shkliarov was a Harvard University fellow at the Center for Russian and Eurasian Studies, a political analyst and journalist.  He has been charged with organizing an event in a town he has never visited, on behalf of a candidate he has never met, on a day when he was with his family in the United States, in my home state of Virginia.  It is time for this absurd farce to end.  This is not a good thing for a United States citizen to be detained under a false pretense, under a false charge and taken away and held incommunicado. The United States takes the most serious observation of this matter. Conditions at the detention center where Mr. Shkliarov is being detained are grim. We call on Belarusian authorities to release Mr. Shkliarov and drop all charges.

Thank you, Mr. Chairman, for this opportunity to present this very elaborate and involved statement of the American position.