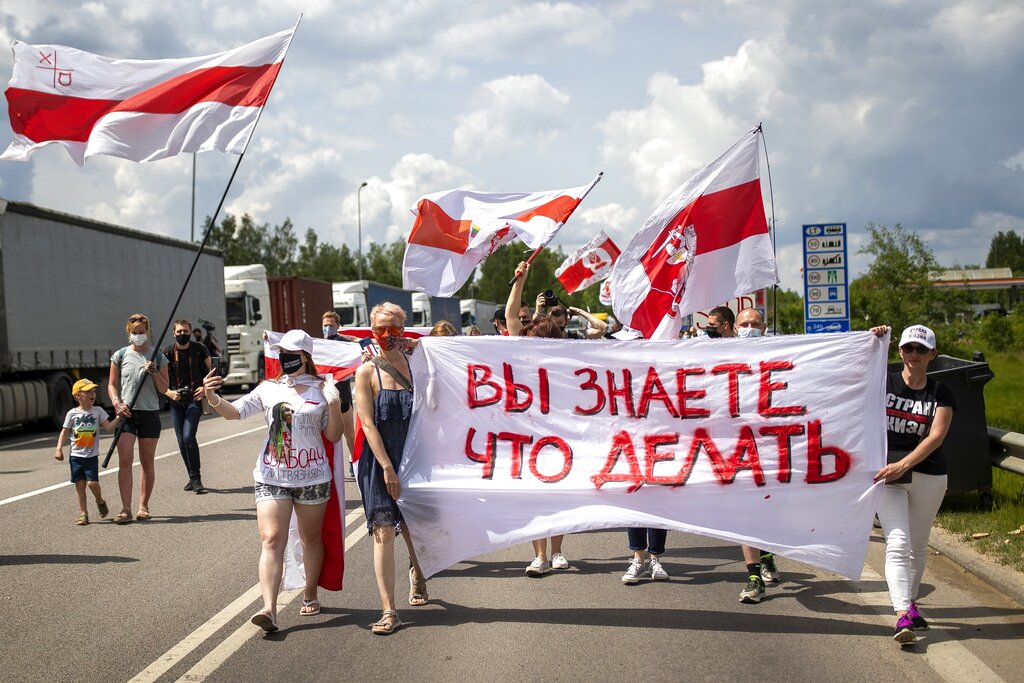 Protesters hold a banner reading "You know what to do" , and old Belarusian national flags during a protest demanding freedom for political prisoners in Belarus near Medininkai, Lithuanian-Belarusian border crossing east of Vilnius, Lithuania, Tuesday, June 8, 2021. (AP Photo/Mindaugas Kulbis)

Circumstances in Belarus worsen by the day.  The repression and severe abuses against pro-democracy activists, independent media, members of the opposition, and civil society based on politically-motivated charges continue to grow.    Instead of upholding human rights, the regime is suppressing the exercise of the rights of freedom of expression and assembly through increasingly draconian measures.  These harsh measures include numerous new laws providing authorities additional ways to shut down and censor the media and to suppress dissent in general.  We condemn the May 18 coordinated police raids on the offices of independent media outlet Tut.by as well as the subsequent blocking of its website on spurious political grounds.  The number of political prisoners skyrocketed over the past month to nearly 500, including at least three dozen journalists.

During his June 1 court appearance, opposition activist Stsiapan Latypau’s described how authorities placed him in a punishment cell and threatened his family in an attempt to force him to confess to politically-motivated charges.  Latypau stabbed himself in court in an apparent suicide attempt rather than compromise his values or his family’s safety.

On May 2, political prisoner Vitold Ashurak died in police custody under disputed circumstances.  Belarusian state media also broadcast an appalling June 3 hostage video of Raman Pratasevich, the journalist the regime arrested after its forced diversion of RyanAir flight 4978, featuring his coerced “confession” under duress.  Human rights organizations and activists noted marks on Pratasevich’s hand and forehead indicating his abuse at the hands of Belarusian authorities.  There are credible reports that Belarusian authorities are forcing political prisoners to wear yellow badges which mark them for harsher treatment.  We are also deeply concerned by the authorities’ cynical efforts to portray peaceful, pro-democracy opposition as support for extremist or Nazi ideology, as seen most recently in its June 8 changes to the Criminal Code.

In addition to these reprehensible actions, Belarus’s decision to restrict its citizens from leaving the country shows a clear attempt by Belarusian authorities to cut them off from the outside world.

Last week Belarus informed us it is imposing new limits on American diplomatic and technical personnel at the U.S. Embassy in Minsk effective, June 13.

The United States, in concert with our international partners, continues and will continue to press the Lukashenka regime to cease harassment of activists, journalists and others; release all political prisoners; and hold to account those responsible for human rights abuses.  We urge Belarusian authorities to accept the OSCE Chair-in-Office’s offer to facilitate a dialogue inclusive of the opposition, namely the Coordination Council and civil society.  This dialogue would lead to holding free and fair elections consistent with OSCE standards and under OSCE observation and the supervision of independent domestic observers.

A sovereign, independent Belarus that respects the democratic will of its citizens, their human rights, and the country’s international obligations and commitments is in the interest of the people of Belarus, the United States, and the OSCE region.  We are disappointed to be where we are now in our relationship with Belarus, but we are resolved to work with fellow participating States to uphold OSCE principles and commitments.