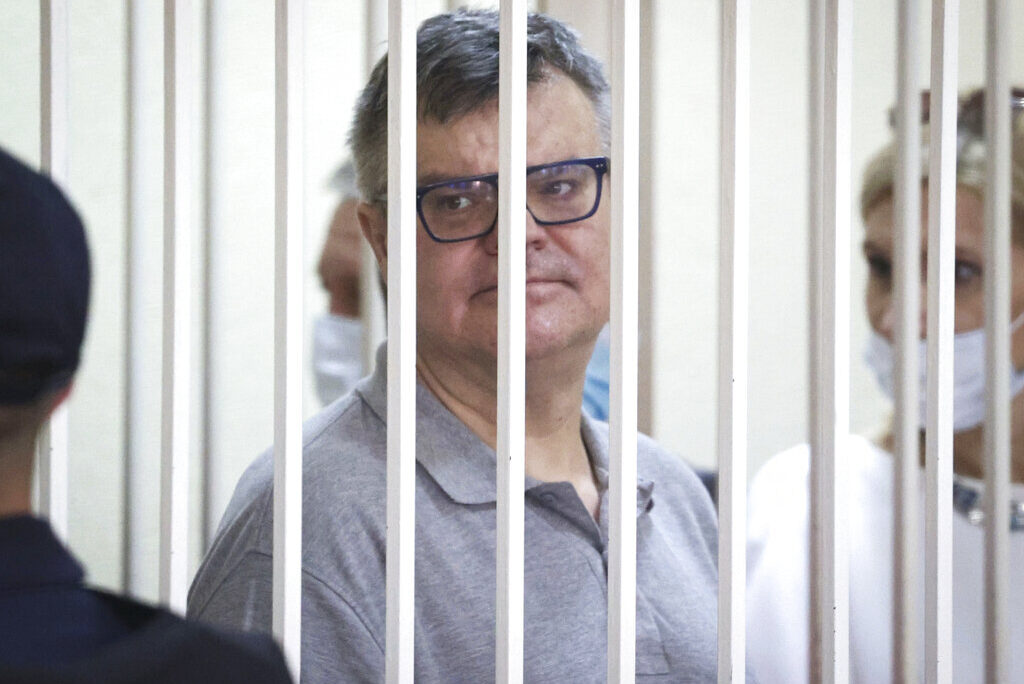 The Supreme Court in Belarus has sentenced Viktor Babariko, a former contender in the 2020 presidential race to 14 years in prison on corruption charges in a case that has been widely seen as politically motivated. (Ramil Nasibulin/BelTA Pool Photo via AP)

The human rights situation in Belarus continues to deteriorate.  The abuses and repression of pro-democracy activists, independent media, and civil society continue to grow.  The regime is suppressing the exercise of the rights of freedom of expression and peaceful assembly through increasingly draconian measures, including numerous new laws providing authorities new ways to shut down and censor the media, as well as dissent in general.  The number of political prisoners has surpassed 540 and includes over two dozen journalists.

New legislation prohibits posting public opinion polls reflecting the socio-political situation in Belarus on social media without government approval.  Hyperlinks to messages and materials containing prohibited information are also banned.  Under these laws, the Prosecutor General and regional prosecutors can restrict access to online publications that they deem could “harm national interest,” while the Ministry of Information can prevent the publication of any mass media.  Furthermore, all mass events now require the express permission of local authorities.  Live coverage of events, including by journalists, without prior authorization is prohibited.  Authorities can shutdown public infrastructure in any location—or even along the routes of—authorized events.  Amendments to the law on telecommunications permits the state to restrict network operations and facilities, from reducing time and volume of their use to outright suspension.

On July 6, Viktar Babaryka—recognized by human rights defenders as a political prisoner—was sentenced to an outlandish 14 years in prison.  The former Presidential candidate joins hundreds of the other political prisoners recognized by human rights groups.  Imagine the personal cost—hundreds of lives interrupted, families torn apart, careers destroyed.  Imagine the broader cost for the country—Belarus’ best and brightest are languishing in prison for voicing their political views, instead of being free to build innovative companies, educate the next generation, or realize a more prosperous future for all Belarusians.

Lukashenka regime’s campaign of repression against independent civil society and media continues unabated. On July 14, Belarusian authorities carried out an unprecedented series of coordinated raids affecting at least 19 civic, political, and educational NGOs across the country in a sweeping crackdown.  Less than a week before, on July 8, police raided media outlets or detained individual reporters in Minsk, and other cities throughout Belarus, in a further effort to harass and impede the work of independent media.  Several staff members of the popular news site Nasha Niva were detained, and Nasha Niva joined the growing list of websites that have been blocked as a result of the relentless crackdown.

The United States, in concert with our international partners, is taking steps to hold the Lukashenka regime accountable.  The United States will continue to press the Lukashenka regime to release all political prisoners; promote accountability for those responsible for human rights violations and abuses; and advocate for the end of politically-motivated harassment of activists, journalists and others.  We will also continue to urge Belarusian authorities to accept the offers by OSCE Chairs-in-Office to facilitate a national dialogue inclusive of the opposition, namely the Coordination Council and civil society.  This dialogue would lead to holding free and fair elections consistent with OSCE standards and under OSCE observation and the supervision of independent domestic observers.

A sovereign, independent Belarus that respects the democratic will of its citizens and honors the country’s international obligations and commitments, including those on respect for human rights, is in the interest of the people of Belarus and the entire OSCE region.