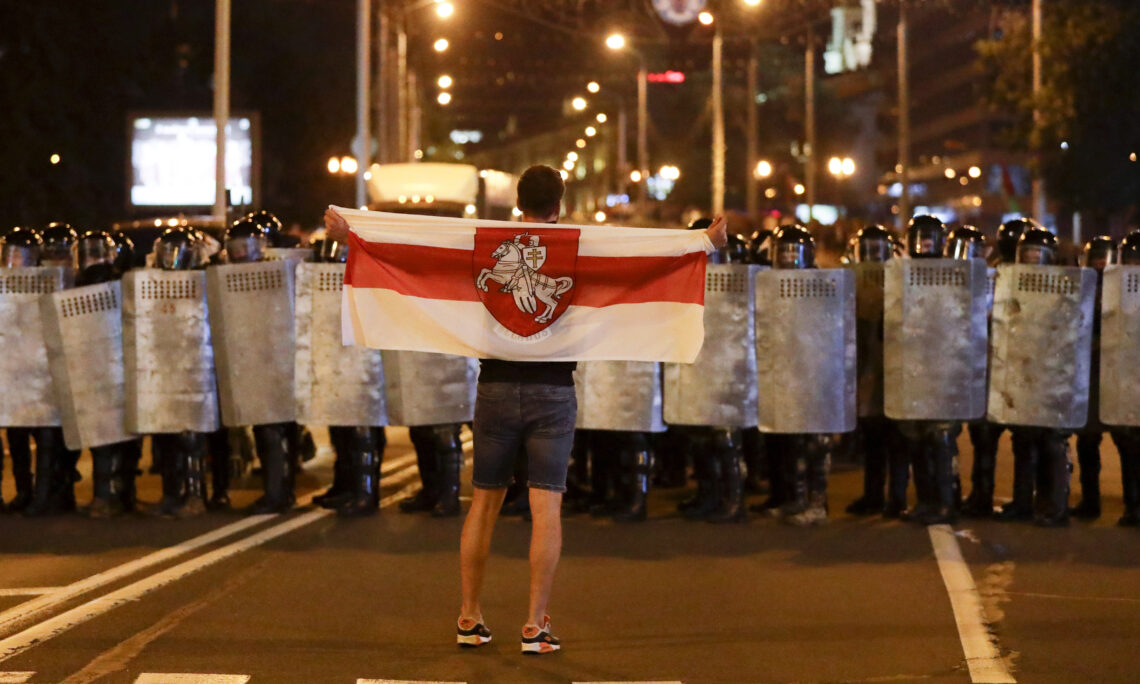 A protester holds an old Belarusian national flag as he stands in front of police during a demonstration against the disputed presidential election in Minsk, Belarus. (AP Photo/Sergei Grits, File)

As in recent weeks, today, it is impossible for us to ignore the ongoing events in Belarus.  Not a single case has been opened by Belarusian authorities to review ongoing police violence and repression.

Instead of investigating police violence, First Deputy Interior Minister Gennady Kazakevich said on October 12 that “law enforcement personnel and interior troops will use special equipment and lethal weapons.”  Using lethal force against peaceful protestors would be a clear violation of international law.  Anyone responsible for taking any such action should be held personally accountable.  We were deeply concerned by the authorities’ shocking displays of violence against peaceful protesters this past weekend, including the detentions of over 700 demonstrators.

Violence, and threats to use live ammunition against peaceful protesters, is not the answer to the challenges facing Belarus.  We urge Lukashenka to begin a meaningful dialogue with the opposition and accept the Chairmanship’s offer to facilitate such dialogue.

We commend the European Union’s October 12 announcement of additional sanctions on Belarusian officials.  If Lukashenka and others want to avoid implementation of those sanctions, they know what to do: cease the violence against protestors and engage in a genuine dialogue with the opposition about new elections.

The United States reiterates its numerous statements that the fraudulent August 9 elections were neither free nor fair, and we repeat our appeal to the Belarusian authorities to engage in a credible, inclusive national dialogue with the people of Belarus to discuss a way forward.

We again call upon the Belarusian authorities to demonstrate restraint, immediately cease the brute violence against the Belarusian people, release all those unjustly detained, and engage with the opposition in genuine, meaningful dialogue.