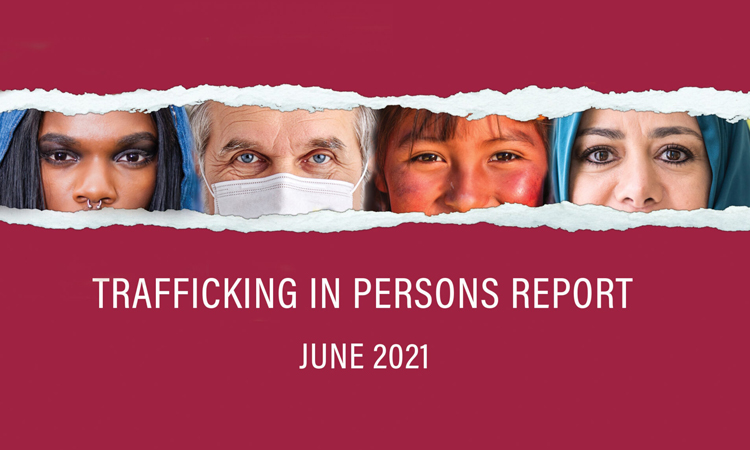 On Release of the 2021 Trafficking in Persons Report

The theme of this year’s TiP Report is “Human Trafficking in the Context of a Global Pandemic.”  In its introductory section, the Report describes how the conditions created by the pandemic increased the number of people vulnerable to human trafficking, and interrupted existing and planned anti-trafficking interventions.  The report also shares examples of leadership, resilience, and adaptability across the anti-trafficking community—from international organizations to local NGOs, governments, and survivor leaders.

Madam Chair, I recall the efforts at the last Ministerial Council to get consensus on a TiP decision.  The United States also recalls the efforts by the Office of the Special Representative and Coordinator for Combatting Trafficking in Human Beings and ODIHR on this topic over the past year.

Although the global community made strides in its fight against the pandemic, its effects on survivors and victims remain of great concern.  We must continue to be vigilant in protecting and supporting those who are vulnerable, work towards preventing trafficking in persons, and prosecute traffickers.

The United States believes we should learn from the lessons of the pandemic to fill some of the gaps in the OSCE’s trafficking commitments, including on addressing demand, as was recently discussed at the Alliance Conference against Trafficking in Human Beings; judicial and investigative responses; technology; and national referral mechanisms and equivalent systems.  The United States is ready to partner with countries to advance these goals at this year’s Ministerial Council.

At last week’s virtual public ceremony to release the United States’ 2021 TiP Report, Secretary Blinken, along with Acting Director of the Office to Monitor and Combat Trafficking in Persons, Dr. Kari Johnstone, took the occasion to honor eight courageous Trafficking in Persons Heroes, who have dedicated their lives to combating human trafficking around the world.  I am pleased to report that three of the eight honorees are from the OSCE region.  They are civil society activists Imelda Poole from Albania, Shakhnoza Khassanova from Kazakhstan, and Rocío Mora-Nieto from Spain.

As we honor these heroes, we deepen our commitment to furthering this important work in bilateral and multilateral fora, and to invigorating our efforts here at the OSCE.  Together with our partners in civil society and the private sector, as well as with the International Survivors of Trafficking Advisory Board launched earlier this year by ODIHR, we are maximizing our collective efforts to end modern-day slavery.  We are grateful for the OSCE’s initiatives and we look forward to cooperating with you on future initiatives in this area.