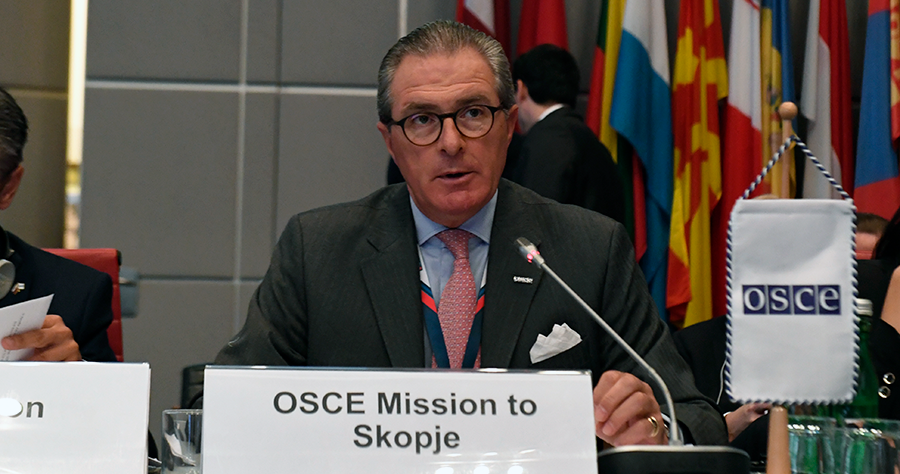 The Head of the OSCE Mission to Skopje, Ambassador Clemens Koja, presents his mission's report to the Permanent Council. (USOSCE/Gower)

The United States welcomes Ambassador Koja to the Permanent Council. Thank you, Ambassador, for your thorough report this morning.

North Macedonia has made significant progress over the past year as a functioning democracy on the path to Euro-Atlantic integration. The OSCE Mission to Skopje is well positioned to support this effort.

The United States is proud to support the Mission’s work to improve inter-ethnic relations via school-based activities for youth through the “Building Bridges” project. Programs like these, along with your Mission’s monitoring of political activities, have been a crucial factor in successful implementation of the Prespa Agreement. The Prespa Agreement represents a significant step toward stability, security, and prosperity throughout the region. It is in line with the will of North Macedonia’s people and empowers their Euro-Atlantic aspirations.

The United States commends the citizens of North Macedonia who voted in the 2019 presidential elections. We congratulate President Stevo Pendarovski on his election and look forward to working with him, the government, and all political parties to advance North Macedonia’s future in NATO and the European Union. In the lead-up to the election, the OSCE Mission in Skopje was a steady presence, monitoring and reporting on political activists and protests. Your mission’s work with local political leaders was particularly effective in promoting an environment for constructive dialogue before the elections.

For more than 25 years, the citizens of North Macedonia have sought to see their country take its rightful place in Euro-Atlantic institutions. Recent developments have brought tangible progress on those efforts, and we look forward to welcoming North Macedonia as the 30th member of NATO. North Macedonia deserves a date to open accession talks with the European Union at the earliest opportunity. We are encouraged that EU member states will be making a clear decision on the accession process by October 2019, which is a good move forward for North Macedonia. North Macedonia already has made significant strides toward EU accession by implementing needed reforms, including strengthening the rule of law, promoting good governance, and improving regional relationships. EU accession will contribute to regional stability and signal to other aspirants in the Western Balkans that hard work is rewarded.

The United States works with the people and government of North Macedonia toward its secure and prosperous future as a multi-ethnic democracy fully integrated in Euro-Atlantic institutions.
By facilitating inter-ethnic relations, supporting the rule of law, and observing elections amid political strains, the OSCE Mission to Skopje contributes to North Macedonia’s future and the region’s security.

Once again, Ambassador Koja, we welcome your mission’s outstanding work during what has been a critical period for North Macedonia. You have our full support in your important mission.