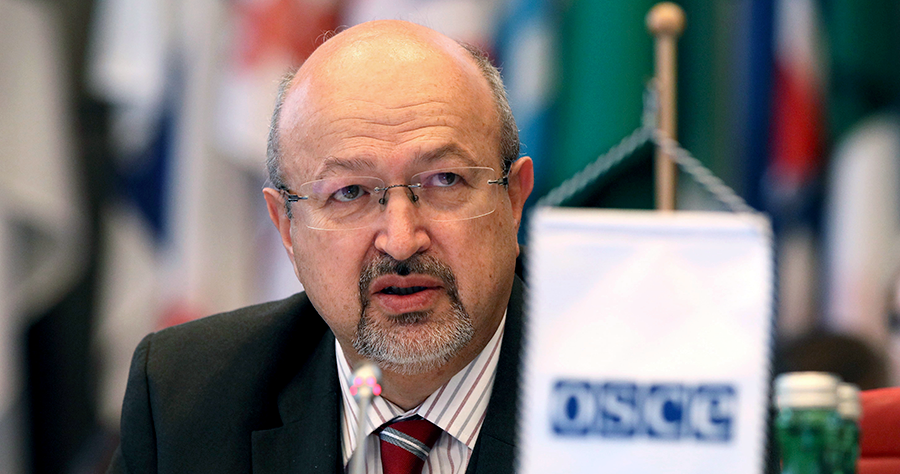 As delivered by Chargé d’Affaires Gregory Macris
to the Permanent Council, Vienna
May 23, 2019

Welcome back to the Permanent Council, Mr. High Commissioner, and thank you for providing participating States your report well in advance of today’s meeting. It was a thoughtful and comprehensive product that clearly demonstrated the value of your mission to the organization and participating States.

Mr. High Commissioner, the United States commends your work to ease inter-ethnic tensions by drafting and promoting thematic Recommendations and Guidelines for use by participating States and other policymakers. As you rightly point out, there are no “ready-made blueprints,” but such Guidelines provide a flexible tool that States can adjust to specific circumstances. We also commend you for incorporating gender mainstreaming into this body of work, as part of a broader OSCE effort to implement the 2004 OSCE Action Plan for the Promotion of Gender Equality and as a way to encourage the equal participation and representation of women, especially those from vulnerable groups, in preventing inter-ethnic conflicts.

Mr. High Commissioner, you have traveled extensively throughout the past six months, and we appreciate the readout of your trips. We commend your visit to Turkmenistan last fall, and we urge the government to follow up on your recommendations for meeting its human rights obligations and its OSCE commitments.

We note with special interest your recent trip to Ukraine. Last week the Permanent Council marked 75 years since the Soviet Union deported hundreds of thousands of Crimean Tatars from Crimea. Unfortunately, the Crimean Tatars, now citizens of an independent Ukraine, again find themselves the victims of the Kremlin’s repression. We urge you to maintain a focus on the plight of the Crimean Tatars and members of other religious and ethnic minorities in Russia-occupied Crimea and on the concerns raised in the 2015 joint report by your office and ODIHR. We condemn the Russian occupation forces’ campaign of violence directed at the Crimean Tatars and other Ukrainians for their opposition to Russia’s occupation. We urge Russia to permit your office, other independent international observers, and independent media unimpeded access to occupied Crimea to investigate credible reports of ongoing serious abuses.

We laud your engagement with Ukraine’s officials and parliament to support Ukraine’s efforts to improve its institutions that protect the human rights of members of minorities. We note with appreciation Ukraine’s recent decision to extend implementation of the language provisions of its Education Law, in line with Venice Commission recommendations, and we encourage Ukraine to continue to address the concerns of minority populations with regard to minority language education.

We note your reference to States’ granting citizenship to individuals living abroad, cautioning that such steps should “respect territorial sovereignty and should refrain from conferring citizenship en masse.” We share your regrets that these guidelines are not always followed. We condemn Russian President Putin’s provocative April 24 and May 1 decisions to provide expedited citizenship for Ukrainian citizens living in Russia-controlled eastern Ukraine and former residents of Crimea. These provocations are an attack on Ukraine’s sovereignty and an attempt to drive a wedge between Ukrainian citizens and their government.

Mr. High Commissioner, the United States appreciates your continued focus on southeastern Europe and your work with OSCE Missions in these countries. We are especially heartened by the positive developments in North Macedonia, where the peaceful implementation of the Prespa Agreement has created positive momentum in inter-ethnic relations. We encourage your office to continue its consultations with the government in Skopje to ensure additional progress on this issue. However, we remain troubled by ethnicity-based discrimination in other countries in the Western Balkans, notably in Bosnia and Herzegovina, and share the concerns of those who feel their ethnicity should be irrelevant or a personal matter.

We also appreciate your work with Georgia as well as with Moldova to help build inclusive and tolerant societies there.

Mr. High Commissioner, the United States values the work of your office and supports your independence, mandate, and role in conflict prevention, including providing early warning and early action when tensions arise that involve national minority issues. The High Commissioner is a key OSCE institution that advances the goal of enhancing peace and security throughout the OSCE region and contributes to respect for the human rights of members of national minorities.