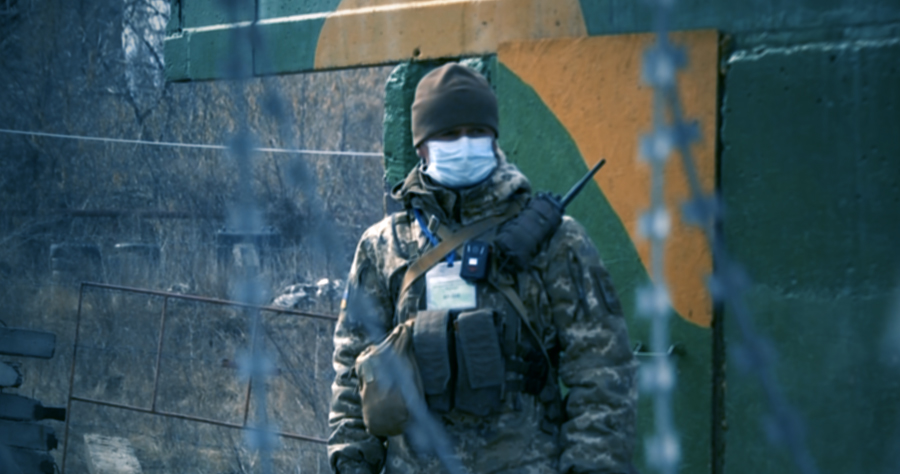 A soldier in a face mask watches on at a checkpoint in Mayorsk, Donetsk region, Ukraine, Monday, March 16, 2020. (APTN via AP)

And I recognize your sophisticated efforts to carry out the work of the OSCE, particularly through this wonderful effort to apply our technology. I think that it’s a great step forward and I appreciate your leadership in this regard.

I begin with Ambassador Cevik. The United States joins other participating States in applauding your leadership of the Special Monitoring Mission throughout this challenging time. The United States takes note of the strong statement that was just issued by the European Union, and joins those ideas that you have expressed so strongly and firmly. Ambassador Cevik, we appreciate your frequent outreach regarding the status of the monitors and the contingency plans for the SMM’s operations.  We have been in frequent contact with you, that’s great leadership to enable us to talk to you. And we are very grateful for your efforts to balance the challenges that you face during the pandemic, with the duties that you have to monitor the situation and the success that you are having in those efforts.

As everyone so far has said, today is a particularly poignant day for the Special Monitoring Mission. April 23 marks the third anniversary of the death of Joseph Stone, the American SMM medic who was killed by a landmine in eastern Ukraine in 2017. So far every speaker has remembered Joseph Stone, and has recognized his death. Three years have passed since Mr. Stone’s death, we have not forgotten the sacrifice he made to try to help end this bloody conflict that continues on, as was recognized, to this day. Today, our thoughts are with his family, friends and colleagues, to whom we extend our heartfelt condolences along with all of the others who have spoken today.

Joseph Stone’s death reminds us of the dangers and difficulties that SMM personnel face when monitoring the deadly conflict Russia instigated and perpetuates in eastern Ukraine. Fulfilling the Mission’s mandate is made more complex by the need to implement COVID-19 countermeasures and social distancing practices that are necessary to protect the health of the monitors and of those with whom they interact. Russia and its proxies are exploiting this pandemic to restrict further the movements of the SMM in eastern Ukraine, placing SMM personnel and their mission in greater jeopardy. There is nothing to indicate that the monitors, in any way, endanger the people that they are monitoring. But yet those assertions are constantly made. There is no reason to be constantly blocking them from crossing the borders in and out, so that they can carry out their monitoring mission. And this is the method that this organization has chosen to try to resolve this conflict.

Since March 21, Russia’s proxies in the Donbas have largely prevented the SMM’s movement across the Line of Contact and between the Donetsk and Luhansk oblasts. Despite these new restrictions, the Monitors continue to perform their duties as the international community’s “eyes and ears,” documenting thousands of ceasefire violations in recent weeks as well as civilian causalities, including several deaths. The Monitors are often placed in perilous situations, as evidenced by a recent incident in which SMM personnel reported impacts from small-arms fire or shrapnel within 50 meters of their position.   These have serious implications to the Monitoring Mission and to the efforts that the OSCE is making towards a peaceful resolution.

Ambassador Grau, the United States appreciates your continued efforts to achieve peace through the Trilateral Contact Group. We welcomed the April 16 return of 20 additional Ukrainian captives from Russia-controlled areas of the Donbas to their homes and families. Sadly, many more Ukrainian citizens languish in Russian detention facilities, victims of Moscow’s ongoing aggression against its sovereign neighbor; we also long to see those persons reunited with their loved ones.

Ambassador Cevik, we encourage you to continue to work with Ukraine and Russia in the TCG’s Security Working Group to achieve a full and comprehensive implementation of the ceasefire and to agree on and establish additional disengagement areas and crossing points, in accordance with the goals the Normandy leaders set back in December. And you’ve made note of the slowness of this progress. Clearly you have the support of President Zelenskyy in this effort, and the Kremlin needs now to do its part. If they work together, progress can be made. Ambassadors, as discussions within the TCG help ensure continued focus on the way forward, please be wary of any attempt by Russia to use the COVID-19 pandemic to put pressure on already vulnerable groups in eastern Ukraine.

The United States remains deeply concerned by ongoing abuses in Crimea. Moscow’s latest plan is apparently to conscript 3,300 Ukrainians from Crimea into Russia’s armed forces for duty in the Southern Military District. This would bring the total number of Ukrainians in Crimea forcibly conscripted by Russia to over 22,000 and would be a blatant violation of international law. Those of you who are on this call, listen! This is a serious violation of international law, and it continues on today, and it is highly wrong, and highly inappropriate. The United States takes serious note of this. We call on Russia to end immediately its campaign of forced conscription of Ukrainian nationals on Ukrainian territory.  This is a violation, a serious violation of international law, and everyone on this call ought to take note of it.

Our thoughts are with the dozens of Crimean Tatars and other Ukrainian citizens unjustly held in Russia’s prisons for their principled opposition to the occupation, whose health is at serious risk during this pandemic. We are concerned about Crimean Solidarity Activist Yashar Muedinov, who has reportedly been in punitive psychiatric detention since April 2. We call on Russia to end its repression of the Crimean Tatar community, to release all political prisoners, and to comply with the 2017 International Court of Justice decision ordering Russia to reverse its ban on the Mejlis .

The people of Crimea now face another crisis in the form of the COVID-19 pandemic. We are troubled by the reemergence of the notoriously violent “Crimea Self-Defense” paramilitaries and “Cossack Brotherhoods,” who reportedly have been charged with enforcing self-quarantine rules in Crimea. The real extent of the coronavirus in Crimea is unknown, owing to Russia’s limits on the flow of information through its harassment and repression of independent Crimean voices. Now more than ever, it is critical for occupation authorities to open humanitarian aid corridors and allow international monitors into Crimea.

The United States will continue to shine a light on the human rights situation in Crimea and hold Russia accountable for its violations of international law there. We reject Russia’s attempted annexation. We know they’re doing it, and we reject it! And we deplore this occupation, and reaffirm that Crimea is an integral part of sovereign Ukraine.

Mr. Chair, the United States fully supports Ukraine’s sovereignty, independence, and territorial integrity within its internationally recognized borders, including its territorial waters. We join our European and other partners in affirming that our Minsk-related sanctions against Russia will remain in place until Russia fully implements its Minsk commitments. The Crimea-related sanctions will remain in place until Russia returns full control of the peninsula to Ukraine.