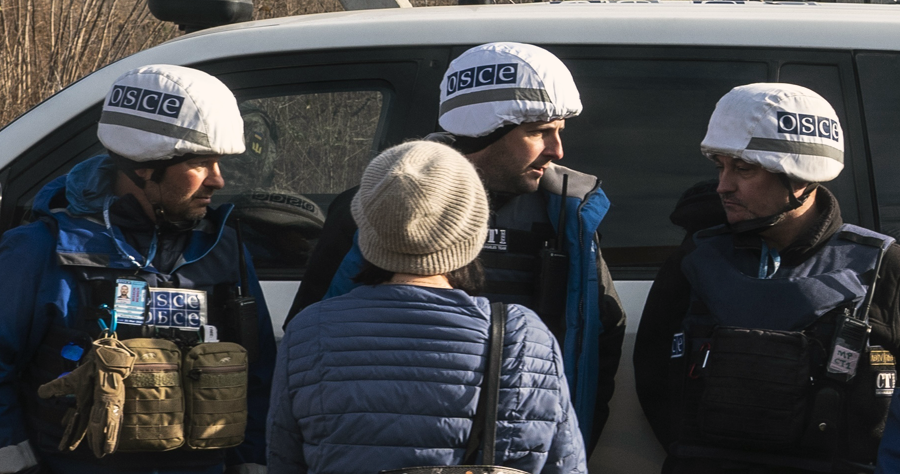 We were, like the others, pleased to hear that during last week’s virtual meeting of the Normandy Format, the Foreign Ministers discussed the need to ensure full access for the Special Monitoring Mission. It is high time that Russia directed the forces it arms, trains, finances, leads, and fights alongside in eastern Ukraine to stop impeding the critical work of the SMM and lay down their weapons.

The security situation in eastern Ukraine remains dangerous and unpredictable, and there cannot be a secure environment for free and fair elections until Russia and its proxies cease hostilities and withdraw from Ukraine. But instead of taking any real steps toward ending the conflict that it foments and fuels, Moscow remains intent on trying to evade responsibility and cast itself as a mediator in this conflict, rather than the aggressor.

Instead of engaging in good faith discussions about locations for new disengagement areas and crossing points, Russia is pressuring Ukraine to negotiate directly and exclusively with its proxies, the so-called “authorities” of the “People’s Republics” in Russia-controlled areas of Donetsk and Luhansk.

As long as Russia pretends that it is not a party to this conflict, real progress toward a lasting ceasefire is going to remain elusive. Russia’s stance fools nobody. All of us have seen the media reports over the years detailing the presence of Russian hardware and military forces in eastern Ukraine. On a near weekly basis, further evidence of Russia’s presence in the Donbas is presented in the OSCE’s Forum for Security Cooperation.

While Russia works to obstruct progress in Normandy Format and the Trilateral Contact Group discussions and on the ground in Ukraine, civilians in eastern Ukraine and Crimea continue to suffer. This week, the Special Monitoring Mission reported a number of civilian casualties, including a 13-year-old boy, previously referred to, and his grandparents, who were injured when their house was hit by shelling, and, as was discussed, a 67-year-old woman killed by gunfire. As always, innocent civilians suffer as a result of Russia’s aggression in eastern Ukraine.

The SMM reported daily ceasefire violations this week, including, once again, around the Donetsk Water Filtration Station. The SMM spotted anti-tank mines within the Zolote disengagement area, which it assessed as belonging to Russia-backed forces and reported small-arms fire within the vicinity of the Petrivske disengagement area. At the December 9 Normandy Summit in Paris, Russia committed to a full and comprehensive implementation of the ceasefire by the end of 2019, but violations have continued for months past this target date. It is high time the ceasefire became a reality.

Again, this week, we saw SMM’s movements restricted on multiple occasions. In Donetsk, members of the Russia-backed forces prevented an SMM patrol from crossing into government-controlled territory for more than six hours, claiming the patrol did not have permission to pass. The Mission also continues to encounter interference with its valuable UAV assets from small-arms fire or signal jamming. Attempts to interfere with or damage the SMM’s UAVs – paid for by the participating States of this Council – are unacceptable.

The United States remains deeply concerned over continued abuses in Crimea. The residents of Crimea have endured more than six years of repression, harassment, intimidation, arrest, and detention at the hands of Russia’s occupation authorities. Politically motivated arrests are a common occurrence for those who speak out against the occupation regime. We call on Russia to release those arbitrarily detained.

We remain concerned about severe restrictions on press freedom in occupied Crimea. Ukraine’s National Union of Journalists and the Institute of Mass Information have reported more than 300 actions against journalists in Crimea in the past five years, which have included detention, torture, searches, threats, psychological pressure, and seizure of property.

Russia’s militarization of the Crimean peninsula and its interference with navigational rights and freedoms in the adjacent maritime areas, including in the Kerch Strait and the Sea of Azov, threaten our common security in Europe. Russia’s continuing campaign of forced conscription in Ukraine – including its most recent efforts to conscript an additional 3,300 Crimeans – violates international law.

Mr. Chairman, the United States fully supports Ukraine’s sovereignty, independence, and territorial integrity within its internationally recognized borders, including its territorial waters.  We do not, nor will we ever, recognize Russia’s purported annexation of Crimea.  We join our European and other partners in affirming that our Minsk-related sanctions against Russia will remain in place until Russia fully implements its Minsk commitments.  The Crimea-related sanctions will remain in place until Russia returns full control of the peninsula to Ukraine.