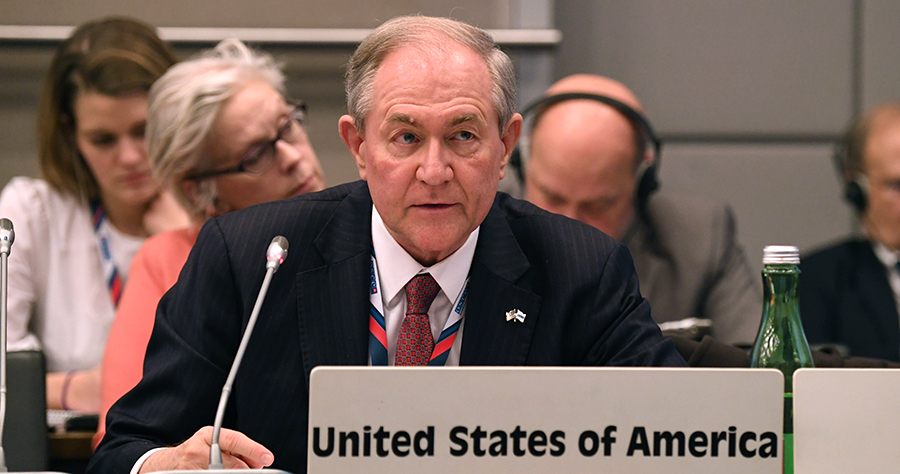 Ambassador James S. Gilmore III, the U.S. Permanent Representative to the OSCE, addresses the Permanent Council on ongoing violations of international law by the Russian Federation in Ukraine. (USOSCE/Gower)

We welcomed the news of the December 29 prisoner exchange, which included the return of captives from Russia-controlled Donbas, as agreed at the December 9 Normandy Format summit. In particular, we were relieved to see the release of Stanislav Aseyevand and Oleh Halaziuk, two contributors to Radio Free Europe/Radio Liberty whose names we have mentioned frequently here at the Permanent Council. They were imprisoned for years in retaliation for their reporting about everyday life in the territories controlled by Russia-led forces. However, there remain several hundred Ukrainians detained by Russia and its proxies in eastern Ukraine, and many more Ukrainian political prisoners held in Crimea and Russia. We call for their immediate release.

We call on Russia to follow through on all the goals articulated at the December 9 Normandy Summit in Paris, especially for a full and comprehensive implementation of the ceasefire, which is the most pressing need for stabilizing the situation in the conflict area. Ukraine permits unfettered access to monitors. We call on Moscow and its proxies to do the same. We also urge Russia to end its destabilizing practice of expediting the issuance of Russian passports to residents of eastern Ukraine. These actions undermine Ukraine’s sovereignty and work against diplomatic efforts to build confidence and foster the reintegration of these communities into Ukraine.

We call upon Russia to abide by the Helsinki Final Act principles and the Minsk agreements and to reciprocate the good faith displayed by President Zelenskyy’s administration. To end this conflict in 2020, both sides must be fully committed to the implementation of a lasting and permanent ceasefire, which is predicated upon the withdrawal of Russian forces and matériel from sovereign Ukrainian territory.

We must anticipate the impact of establishing additional disengagement zones on the operations of the Special Monitoring Mission. The SMM constitutes our eyes and ears, and the world’s eyes and ears on the ground in eastern Ukraine, and providing for its needs should be a priority for all delegations here. The United States has already paid both its assessed and very generous voluntary contributions. We have already done that. The United States calls on all participating states, including Russia, to meet our shared commitment to ensure adequate funding for the SMM and to remain open to further requests by the Chief Monitor to address new requirements that additional disengagement sites and crossing points will present.

It is of utmost importance that we collectively prioritize the safety and security of the monitors. I urge that we maximize the potential of existing and planned technological assets to conduct nighttime monitoring of the conflict zone, as nighttime foot patrols currently pose a great risk to monitors’ physical safety.

The United States calls for the reinstatement of Ukrainian control of its international border with Russia. Free and fair elections should take place under Ukrainian control and in a secure environment, with Russia-led forces and illegal armed formations withdrawn from Ukraine’s territory. However, OSCE Observers document an unrestricted flow of train cars, trucks, and military vehicles every day crossing from Russia into Russia-controlled territory in eastern Ukraine. This unchecked flow of personnel and matériel is a direct challenge to efforts to prepare for free and fair local elections in the Donbas.

The situation in eastern Ukraine remains unpredictable and dangerous, as illustrated by recent SMM reports. In the last two weeks, Mission reports have documented a number of civilian casualties, including a civilian killed in December. Harassment of the Mission persists, as Russian proxies restrict the movements of the monitors. The SMM also reported several instances of jamming or small arms fire directed at the Mission’s UAVs. The United States again calls on Russia to direct its proxies to cease their harassment of the Special Monitoring Mission, as required by Moscow’s commitments under the Minsk agreements. We urge both sides to refrain from any attempt to interfere with or damage the Mission’s valuable UAV assets, purchased by the taxpayers of the participating States of this Permanent Council.

The United States remains concerned over the continued abuses in occupied Crimea. In their December quarterly report, the UN human rights monitoring mission in Ukraine interviewed several high-profile Crimean former prisoners who had returned to Ukraine as part of the September prisoner exchange with Russia.

These men recounted horrifying abuses that included electroshocks, threats of sexual violence, suffocation, and beatings. We fear that the dozens of remaining Ukrainian political prisoners that Russia holds may be experiencing the same severe mistreatment. We call on Russia to release them and return them to their homes and families.

We are concerned that Russian occupation authorities recently extended through February the detention of Ukrainian activist Oleh Prykhodko, who is facing so-called “terrorism” charges in retaliation for peacefully exercising his right to free expression in protest of Russia’s occupation.