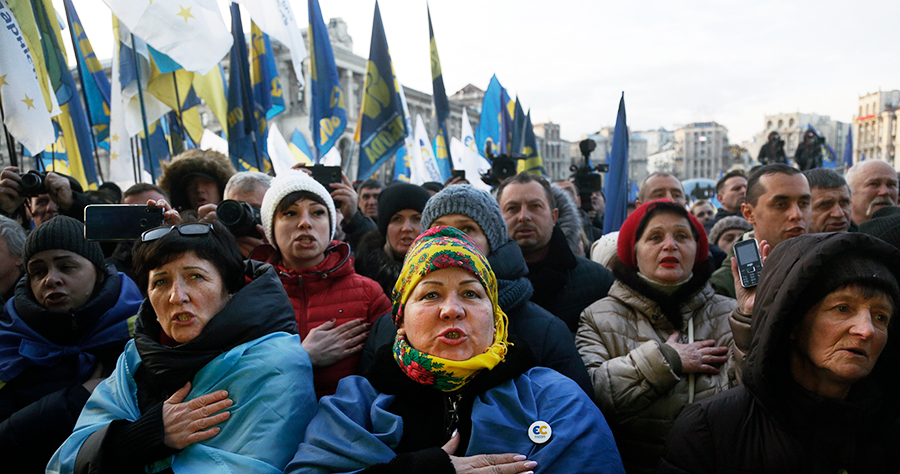 Activists sing the national anthem during a rally in central Kyiv, Ukraine, Sunday, Dec. 8, 2019. A few thousand activists demanded to withdraw the Russian troops from currently occupied Donetsk and Luhansk regions in Ukraine's east on the eve of Monday peace talks in Paris (AP Photo/Efrem Lukatsky)

With the conflict in eastern Ukraine now in its sixth year, Russia’s ongoing aggression has caused the death of more than 13,000 people, displaced millions, and irreparably damaged the lives of millions more.

We take note, however, of some positive developments in recent months. The disengagement at Stanytsia Luhanska and the subsequent reconstruction of a long-awaited pedestrian bridge have had a significant impact on civilians who must cross the line of contact, greatly easing the burdens they endure to complete everyday tasks. Additional disengagement at Zolote and Petrivske demonstrates that peace is, in fact, possible, if Russia allows it.

We welcomed the news in September of a long-awaited prisoner exchange and the return of the 35 detainees, including 24 Ukrainian service members who had been unjustly detained without cause by Russia since November 2018. The return of 11 political prisoners, including Oleh Sentsov, Volodymyr Balukh, Edem Bekirov, and Roman Sushchenko, to their families was also a welcome development. We hope a new recommitment to the ceasefire will prove to be real and lasting.

Last week’s Normandy Format Summit brought further positive signals from the sides via commitment to identify additional disengagement areas and crossing points along the line of contact by year’s end, as well as an “all for all” prisoner exchange before the end of 2019. While yesterday’s meeting of the Trilateral Contact Group did not yield any definitive announcement on a new prisoner exchange, we encourage the sides to continue working towards this goal, as well as the others enumerated in the Normandy Summit communiqué.

Mr. Chair, even as some things change, other elements of the conflict regrettably remain the same. Today, we saw the ninety-fourth time a Russian convoy has passed into the sovereign territory of Ukraine without Ukraine’s permission. Once again, neither the Border Observation Mission monitors nor the SMM were able to inspect the contents of the vehicles within this convoy, ostensibly carrying “humanitarian aid” into the conflict zone. Over the last two months, we have seen weekly convoys of this sort cross into Ukraine. On each occasion the contents of these vehicles have been deliberately masked by Russia.

The Special Monitoring Mission continues to face weekly restrictions on its movements, the overwhelming majority of which occur in Russia-controlled areas. Mission UAVs again experienced instances of signal interference from jamming. We call upon Russia to meet its commitments under the Minsk agreements and direct its proxies in eastern Ukraine to cease their harassment of the SMM. We remind Russia that the SMM’s work to “ensure the effective monitoring and verification of the ceasefire regime” is outlined in item three of the Package of Measures, which Russia approved. We urge both sides to refrain from interfering with, or attempting to damage, the SMM’s UAV assets, for which the participating States of this Permanent Council contribute considerable funding.

With just weeks remaining in 2019, there is much left to be done if the sides are to finalize the proposed prisoner exchange and complete a full and comprehensive implementation of the ceasefire by the end of the year. Now is the time for Russia to match the commitment displayed by President Zelenskyy’s administration to achieving a lasting peace in Ukraine. We are hopeful that Russia will recall its commitments under the Helsinki Final Act and the Minsk agreements and put forth the political will needed to resolve this conflict that has cost so many lives.

Mr. Chairperson, we call on Russian occupation authorities in Crimea to reopen their investigation into the circumstances surrounding the death of 83-year-old veteran of the Crimean Tatar National Movement Vedzhie Kashka. Kashka died in an ambulance in November 2017 after collapsing during a reportedly violent arrest by Russian security forces. A new analysis by independent medical experts reportedly suggests that her death was a direct result of actions committed by the officers who detained her. We also are concerned about the four other elderly Crimean Tatar activists who were unfairly detained in that same action and remain under house arrest.

We also call on occupation authorities to ensure proper medical treatment for Crimean Solidarity activist Shaban Umerov, one of the 24 Crimean Tatars arrested in mass raids this March, who reportedly had a heart attack on December 14 while in pre-trial detention. Umerov is held on terrorism charges brought in apparent retaliation for his human rights work supporting other victims of repression by occupation authorities. Occupation authorities should release him and the other 23 Crimean Solidarity members arbitrarily detained during the same series of raids. We note particular concern that at least three of these activists – Remzi Bekirov, Rustem Seitkhalilov, and Osman Arifmemetov – are reported to be in punitive psychiatric detention since late November.