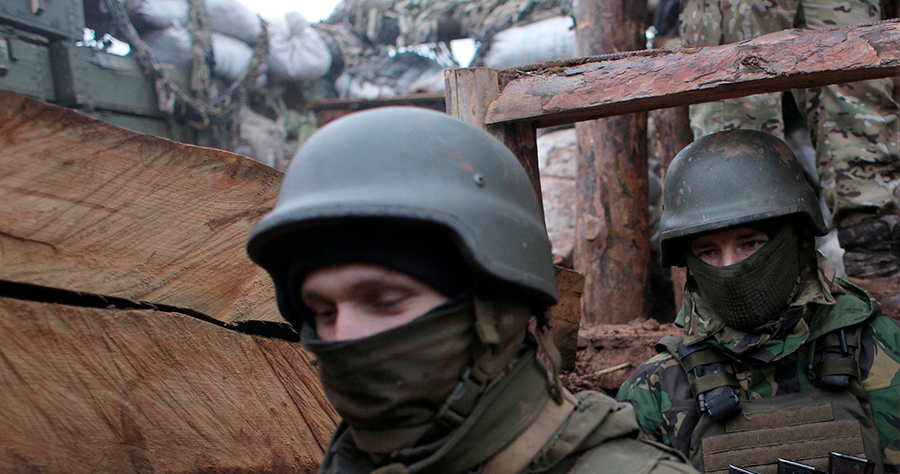 A Ukrainian soldier in a trench in the front line near the town of Novoluhanske in the Donetsk region, Ukraine, Monday, Dec. 9, 2019. (AP Photo/Vitali Komar)

As prepared for delivery by Ambassador James S. Gilmore III
to the Permanent Council, Vienna
March 12, 2020

Following the December 9 Normandy Summit, we hoped to see progress on a comprehensive ceasefire, commitment to new disengagement areas and civilian crossing points, and an “all for all” prisoner exchange. Regrettably, Russian government intransigence is blocking any path toward restoring peace and prosperity in eastern Ukraine.

Russian forces and the proxies they control in eastern Ukraine repeatedly harass the Special Monitoring Mission. They also condone and direct armed combatants on the Russia-controlled side of the Line of Contact who interfere with the Mission’s UAVs. SMM reporting again this week showed the vast majority of infringements on the SMM’s freedom of movement were in Russia-controlled areas.

Russian forces’ ongoing aggression in the region prevents monitoring by the SMM, especially at night, and cripples the Mission’s ability to fulfill its mandate safely. Russia must stop obstructing all efforts to stabilize this deadly conflict. It is difficult to understand why the people of Russia choose to engage in a violent conflict with the people of a neighboring state with whom they have so many relationships and affinities.

Mr. Chairperson, with only weeks remaining before we must act to extend the Special Monitoring Mission’s mandate, the participating States are focused on the 2020 SMM budget. Our initial assessment of the draft budget is positive, and we appreciate the SMM’s and Secretariat’s thoughtful efforts in drafting this document. We also value the recent pledges from many participating States to support the voluntary portion of the SMM’s operations. The United States is proud to be among those contributors. We remind those who have not yet contributed that we all share a responsibility to meet the SMM’s financial needs. Countries that do not contribute to closing the SMM budget shortfall are likewise sending a political message, and not a helpful one.

With an eye toward protecting the safety of our Monitors and the efficacy and continuing importance of this mission, let us conclude these budget and mandate extension discussions quickly and ensure the Mission has the human, technical, and financial resources it needs to fully carry out its mandate.

In recent weeks, the SMM has reported a number of injuries to civilians and damage to residences and schools. Sadly, this week we also learned of the death of a man killed by an explosive device. It is the civilian populations of Luhansk and Donetsk who suffer the most from this Russia-instigated conflict.

That suffering is not limited to eastern Ukraine. Crimean Tatars, ethnic Ukrainians, and others who oppose Russia’s occupation of the peninsula face harassment, arrest, and detention by occupation authorities. We are troubled by the reports of raids by armed and masked members of security forces on the homes of Crimean Tatars in the Bakhchisarai district on the morning of March 11. At least four men arrested during the raids face terrorism charges, Russia’s usual pretext for arresting peaceful opponents of its occupation. Two of those arrested are activists of the Crimean Solidarity movement. According to the accounts of the families of those arrested, members of security services openly planted banned literature in their homes during the raids, which other officers then “found” to justify arrests. We call on Russia to end its campaign of harassment and prosecution of members of the Crimean Tatar community and other minority groups. We are also deeply troubled by the six-year prison sentence handed down on March 5 to Jehovah’s Witness Serhiy Filatov for holding a bible study at his home in Dzhankoy.

Russia continues to militarize the peninsula, bringing in soldiers and weaponry in an effort to further exert its influence in the Black Sea region. We condemn Russia’s actions to conscript over 20,000 Crimeans into the Russian army since the occupation began. The NGO Crimea Human Rights Group has noted an increase in criminal prosecutions for draft evasion against Crimeans who don’t want to serve in the army of the occupier. Russia’s actions are a violation of Ukrainian sovereignty and territorial integrity and threaten European security.

The United States fully supports Ukraine’s sovereignty, independence, and territorial integrity within its internationally recognized borders, including its territorial waters. We do not, nor will we ever, recognize Russia’s purported annexation of Crimea. Let us be clear: this conflict is not a civil war; it is a conflict that Russia instigated and continues to perpetuate—directly and through the proxy forces Russia arms, trains, funds, leads, and fights alongside. We join our European and other partners in affirming that our Minsk-related sanctions against Russia will remain in place until Russia fully implements its Minsk commitments. The Crimea-related sanctions will remain in place until Russia returns full control of the peninsula to Ukraine.