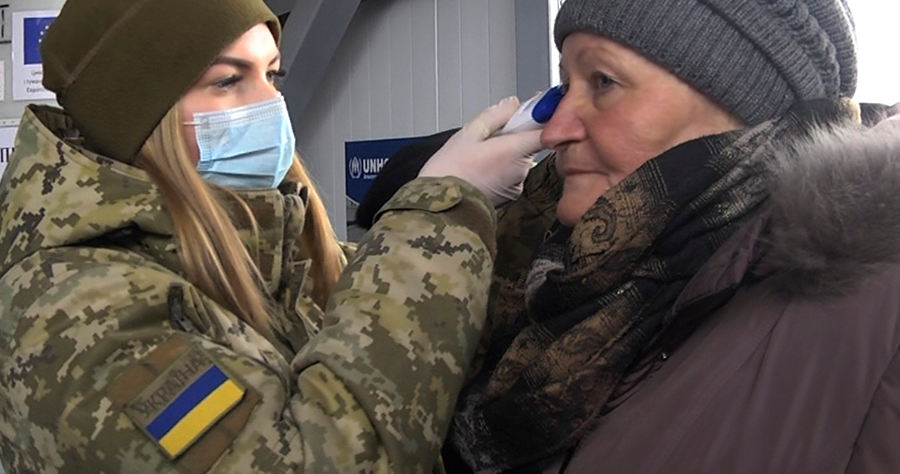 A soldier in a face mask checks temperature of an elderly woman on a checkpoint in Mayorsk, Donetsk region, Ukraine, Monday, March 16, 2020. (APTN via AP)

Almost five months now have passed since the December 9 Normandy Format meeting took place in Paris. Since then, we have had to face the grim reality of a world upended by the coronavirus pandemic. The outbreak has changed our lives, but the behavior of Russia-led forces in the Donbas has remained largely the same. They continue to violate the ceasefire with weapons that are impermissible under the Minsk agreements, violating Ukraine’s sovereignty and territorial integrity, maiming and killing civilians, and threatening critical infrastructure even during this global crisis.

The OSCE’s Special Monitoring Mission continues to execute its mission in eastern Ukraine despite the temporary departure of some staff due to safety and health concerns stemming from the outbreak of the coronavirus. The United States wishes to reiterate our appreciation for the leadership of Ambassador Cevik and his team, who have demonstrated exemplary calm and professionalism during this difficult period. Without fail, the SMM provides participating States critical information about the situation on the ground in eastern Ukraine.

The workload of the monitors — representing more than 40 participating States — is now heavier than ever. In the last week, the SMM reported several thousand ceasefire violations, including inside the disengagement areas of Zolote and Petrivske. The full and comprehensive implementation of the ceasefire that the Normandy leaders agreed to at the December 9 summit clearly has not materialized. In the last few days alone, the SMM verified casualties from shelling or unexploded ordnance. As always, it is civilians who pay the greatest price for Russia’s aggression in the Donbas.

As Ambassador Cevik noted during his report last week to the Permanent Council, continued fighting threatens the water and electrical systems that are vital to protecting the health of civilian inhabitants of the region. The security situation remains precarious near the Donetsk Filtration Station, on which more than a quarter of a million people on both sides of the Line of Contact depend for water supplies.

Safeguarding the supply of water and electricity has always been a priority for the SMM and the OSCE as a whole; in the current operating environment, it is imperative that hospitals and medical clinics have an uninterrupted flow of resources.

The SMM faces movement restrictions on a daily basis, as Russia-led forces block crossing points along the Line of Contact and between Russia-controlled territory in Luhansk and Donetsk oblasts. The restrictions on the SMM’s movement are not new. Between July and December 2019, according to a recent SMM thematic report, monitors were restricted on 566 occasions. The vast majority—93 percent of the restrictions—occurred in Russia-controlled territory. We urge Russia to abide by its Minsk commitments and instruct the forces that it arms, trains, finances, leads, and fights alongside in eastern Ukraine to afford the Mission its full range of movement it needs to fulfill its mandate, including in Crimea.

This week, the Mission reported that small arms fire was again directed against one of the SMM’s UAVs.  As we and many others have stated on multiple occasions, attempts to interfere with or damage the Mission’s UAV assets are unacceptable.

For six years, Russia has occupied Crimea and sought to overturn Ukraine’s sovereignty. Daily, inhabitants of the peninsula face harassment, arrest, and detention as Russian occupation authorities disregard liberty. We are concerned by reports that authorities have questioned and issued written “preventative warnings” to at least six Crimean Tatar leaders to warn against any so-called “extremist” activity, they say, in connection with upcoming Crimean Tatar holidays, including the May 18 commemoration of Stalin’s 1944 deportation of the Crimean Tatar people.

We condemn Russia’s continued widespread use of punitive psychiatry against Crimeans who oppose the occupation. At least two Crimean Tatar political prisoners, Yashar Muyedinov and Raim Aivazov, remain in weeks-long punitive psychiatric detention, where they are reportedly being held with dangerous and unstable cellmates. On April 20, the FSB ordered three other Crimean Tatars who had been arrested in raids last month to be subjected to psychiatric detention. These are old tactics that have occured in the past, and were left behind and now are remerging against political opponents.

We are also following the case of Soviet-era dissident Oleg Sofyanik, who has twice in the past two weeks been turned back by the Russian FSB at the administrative boundary when trying to enter mainland Ukraine from Crimea. In February, occupation authorities threatened to place Sofyanik in punitive psychiatric detention in retaliation for his pro-Ukrainian views. We again demand that Russia cease its harassment of opponents of the occupation and release all those it has imprisoned for their peaceful dissent.

The United States condemns Russia’s militarization of the Crimean peninsula and its interference with navigational rights and freedoms in the adjacent maritime areas, including in the Kerch Strait and the Sea of Azov, which threaten our common security.

And a point that I have been making repeatedly, and will make again: during last week’s PC meeting, the United States joined several participating States in condemning Russia’s latest round of conscription in Crimea, which violates international law. We call on Russia, we demand that Russia end immediately its campaign of forced conscription in occupied Crimea, as well as its other abuses, and return control of the peninsula to Ukraine.

Mr. Chair, the United States fully supports Ukraine’s sovereignty, its independence, and its territorial integrity within its internationally recognized borders, including its territorial waters.  We do not, nor will we ever, recognize Russia’s purported annexation of Crimea.