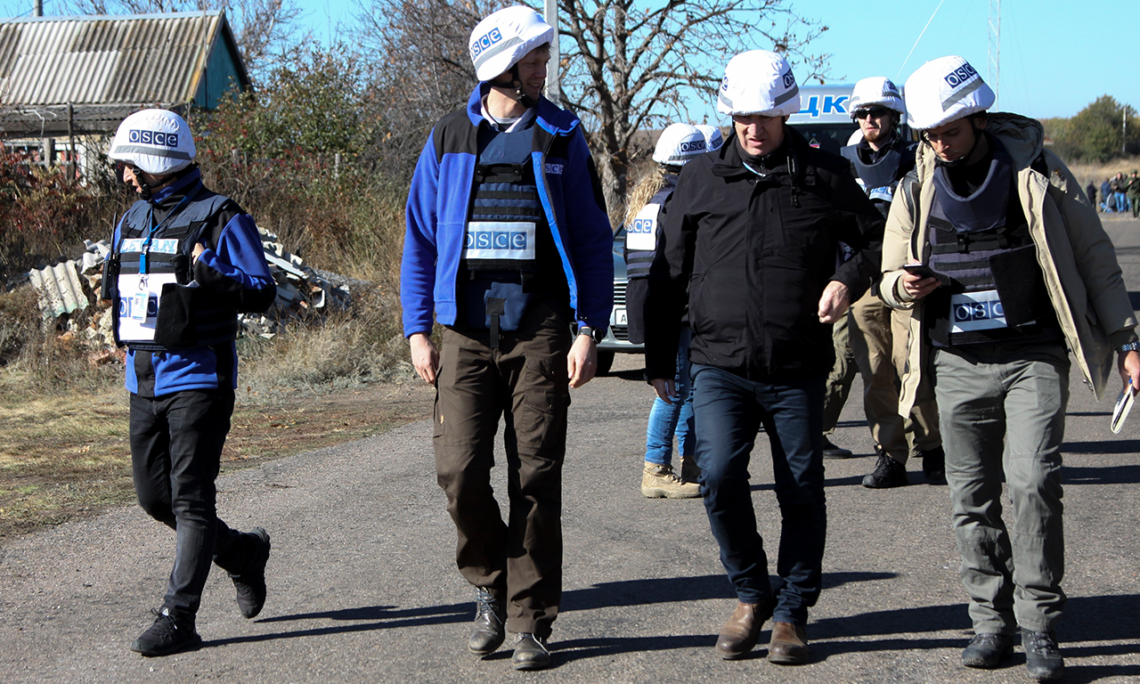 Deputy Head of the OSCE SMM, Mark Etherington, and other members of OSCE walk through a street near a frontline in Petrovske, Ukraine, Wednesday, Oct. 9, 2019. (AP Photo/Alexei Alexandrov)

As delivered by Deputy Chief of Mission Harry Kamian
to the Permanent Council, Vienna
October 10, 2019

We find ourselves at a moment of opportunity in the five-year long Russia-instigated conflict in eastern Ukraine. We are encouraged by a more robust dialogue between Russia and Ukraine and by Ukraine’s clear commitment to improving humanitarian conditions.  We welcome continued progress on repairs to the bridge at Stanytsia-Luhanska, where just this week the Ukrainian Armed Forces opened a pedestrian and emergency bypass ahead of schedule.

We also support the recommitment to military disengagement along the line of contact, which was slated to recommence in Zolote and Petrivske on October 7, although, we are disappointed to note continued delays.

We have heard much talk of the need for “free and fair” elections in the Donbas. This will, of course, require the establishment of a secure environment on the ground for candidates, voters, and election workers and observers. The onus is on Russia to create such conditions. Russia must withdraw its forces and end all support for illegal formations operating in Ukrainian territory. Ukraine must regain control of its international border, and Ukrainian officials must be able to administer elections in line with domestic and international law. Is Moscow finally willing to respect its commitments under the Minsk agreements?

Instead of misrepresenting the facts— as we saw firsthand during last week’s Permanent Council meeting — Russia should fulfill its Minsk commitments and take the necessary steps to resolve the conflict, such as holding to the ceasefire.

This week saw additional injuries to civilians and damage to their homes. Although the frequency of ceasefire violations has fallen since July 21, Special Monitoring Mission personnel face risks daily, and October has seen an uptick in violence. This week, a monitoring team southwest of Donetsk city reported explosions within several hundred feet of its position. The safety of our monitors remains a top priority for all of the participating States.

Undue restrictions to the Special Monitoring Mission’s movements are unacceptable, as are attempts to interfere with the Mission’s UAVs. We urge both sides to afford the Mission the freedom it needs to implement its mandate. We must note however, that once again, the majority of this week’s movement restrictions occurred within areas controlled by the forces Russia arms, trains, leads and fights alongside.

In Crimea, Crimean Tatars; other Ukrainians, including members of other minority groups; and those opposed to the Russian occupation face politically motivated harassment, arrest, and detention. The United States calls on Russia to end its repression in Crimea and in eastern Ukraine and to release all of the over 80 wrongfully imprisoned Ukrainian citizens it holds, including human rights defender Emir-Usain Kuku and Crimean Solidarity movement coordinator Server Mustafayev. If anyone here has not yet read the recent report by UN Secretary-General Guterres on the horrific human rights situation in Crimea under Russian occupation, I would highly recommend it and am happy to share my copy.

Mr. Chair, the United States fully supports Ukraine’s sovereignty, independence, and territorial integrity within its internationally recognized borders, including its territorial waters. We do not, nor will we ever, recognize Russia’s purported annexation of Crimea.