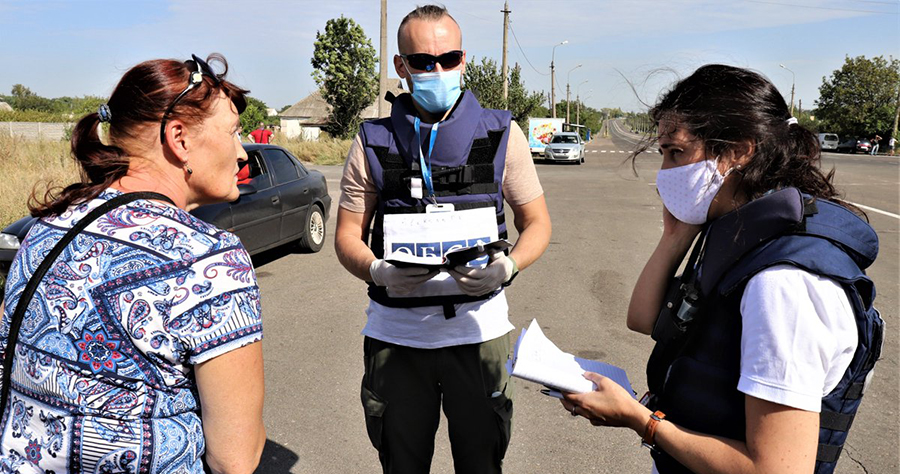 It has been almost two months since additional measures went into effect to reduce violence along the Line of Contact.  The data since July 27 affords participating States some measure of optimism that the situation on the ground may take a lasting turn for the better.

The Special Monitoring Mission continues to report significantly lower levels of ceasefire violations in the conflict areas of both Donetsk and Luhansk oblasts.  As noted by the SMM, the situation “suggests a tangible commitment” to the additional measures to strengthen a ceasefire that was agreed to take hold when the Minsk agreements were signed in the first place.  Civilian and military casualties, both fatalities and injuries, are mercifully lower; however, they have not stopped entirely.

The cost of this conflict, and the violence it generates, is borne by the local civilian communities.  In the last week, the SMM reported a woman was injured in Sloviansk by an unidentified explosive device and on September 9, it reported four separate instances of civilians injured by explosive devices between July 29 and September 5.  These are the real significant costs of the conflict that we at OSCE are trying to adress. These incidents remind us that, even with fewer violations of the ceasefire, the lethal consequences of war remain hidden, resting in flower beds, lodged into riverbanks, and lying in fields, threatening local communities, homes, schools, workplaces, and churches.  It will continue to threaten the men, women, and children of these communities for years, perhaps decades, to come, and it underscores the need for Russia to expedite agreement on demining locations at the Trilateral Contact Group and begin work without delay.

We noted with concern the report circulated by the Ukrainian delegation on September 7 that detailed how Russia-led forces opened fire on Ukrainian Armed Forces’ positions in Luhansk Oblast, killing one Ukrainian soldier on September 6.  On the same day, Russia-led forces fired on Ukrainian positions in Donetsk oblast, wounding one Ukrainian soldier.  Whether the two incidents were carefully orchestrated or demonstrate insufficient command and control by Russia over the forces it leads, these incidents threatened to disrupt the still-fragile ceasefire.  We call upon Russia once again to order the forces it arms, trains, leads, finances, and fights alongside to halt hostile activity and we recognize the forbearance on the Ukrainian side, as they are continuing to stand by the ceasefire.

The safety of the SMM monitors should be the utmost priority for all participating States.  For the Mission to safely fulfill its mandated tasks, it must be accorded secure passage throughout all of Ukraine.

The SMM this week reported yet another incident involving small arms fire directed at one of its Unmanned Aerial Vehicles.  SMM monitors continue to find their movement restricted, the vast majority of instances in areas controlled by Russian proxy forces.  On September 7, SMM monitors preparing to conduct a mini-UAV flight near Russia-controlled Peremozhne reported rounds passing 15 to 30 meters over their heads.

We encourage Ambassador Grau and the sides to continue their discussions within the Trilateral Contact Group and work toward tangible agreements on an upgraded de-mining plan, further exchanges of detainees, and new disengagement areas.

As we have stated on numerous occasions, Russia’s occupation and purported annexation of Crimea is a key component of its broader campaign of aggression against its sovereign neighbor.  Russian occupation authorities continue to infringe upon the rights of Crimean Tatars and other ethnic Ukrainians who oppose the occupation.

We join Ukraine and the other countries who have spoken here today, the United Kingdom and others, in condemning and expressing non-recognition of the so-called “elections” to illegal bodies established by the Russian occupation administration in Crimea and Sevastopol on September 13.  These are not legitimate elections.  The latest act by Russia of conducting so-called “local elections” on Ukrainian territory is yet another affront to international norms.

These actions, like Russia’s seizure of Crimea, violate international law and fly in the face of the Helsinki Final Act of respect for the sovereignty and territorial integrity of states, refraining from the threat or use of force, and the inviolability of borders of other participating States.

As I have said in recent days the serious problem that we face with the purported annexation of Crimea, as much as simply trying to take over another country’s territory by force, is the fact that it disrupts the Helsinki Final Act and the accords the OSCE is based on, in which security of Europe is based. Security of Europe is based on this and it is disrupted. I don’t know how we are going to solve this, but I think it has to be solved or security in Europe will never be secure.

On the Crimean Peninsula, Russian authorities continue to abuse Crimean Tatars, ethnic Ukrainians, and others who oppose the occupation.  These are human rights issues within the third dimension of the OSCE.  More than 90 Ukrainian political prisoners remain incarcerated in Russia and Russia-occupied Crimea, jailed for simply voicing their opposition to the occupation or for peacefully practicing their faith.  On September 16, seven political prisoners, including Crimean Solidarity coordinator Server Mustafayev, were sentenced to harsh prison terms of 13-19 years for politically-motivated charges.  The prosecution’s case against these individuals rested on dubious witness testimony alleging their affiliation with an organization that is lawful in Ukraine.  The United States calls on Russia to immediately cease its abuses against ethnic and religious minorities in Crimea and release all Ukrainian political prisoners it now holds.

Now, in addition to these security issues in the first dimension and in addition to these violations of human rights in the third dimension, we recognize that Ukraine is still going about the business of conducting the country.  We want to take a moment to highlight our continued support to the nation of Ukraine in some of its civic affairs.  I am pleased to announce that the United States will contribute the equivalent of approximately €3.0 million to an OSCE project for the removal and disposal of chemical hazardous waste originating from the liquid rocket fuel component mélange in Ukraine.  This goes to the well-being, health, safety, and security of the people of Ukraine.

Mr. Chair, the United States fully supports Ukraine’s sovereignty, independence, and territorial integrity within its internationally recognized borders, including its territorial waters.  We do not, nor will we ever, recognize Russia’s purported annexation of Crimea.  And I stated the security consequences that it has for all of Europe’s security.  We join our European and other partners in affirming our Minsk-related sanctions against Russia will remain in place until Russia fully implements its Minsk commitments.   The Crimea-related sanctions will remain in place until Russia returns full control of the peninsula to Ukraine.