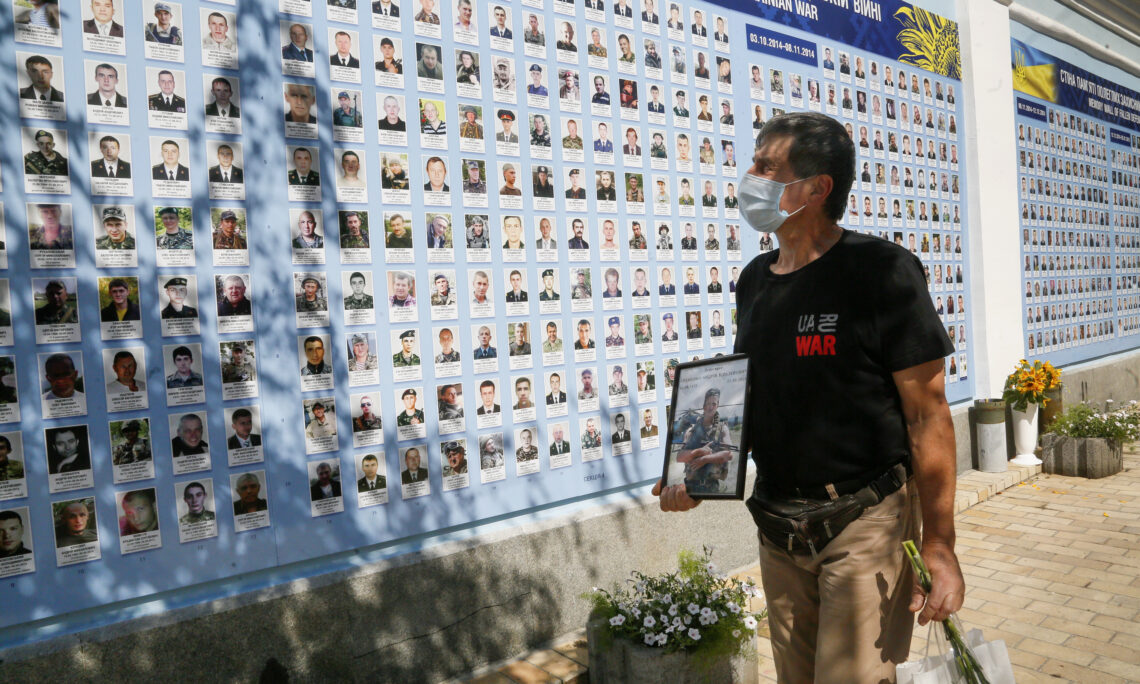 A relative carries a photo of a deceased soldier at the Memorial Wall of Fallen Defenders killed in the war conflict with pro-Russian separatists in the country's east, in Kyiv, Ukraine. (AP Photo/Efrem Lukatsky)

As we prepare to celebrate March 8—International Women’s Day, let us not forget the women of eastern Ukraine.  Women who suffer disproportionately from many of the hardships wrought by Russia’s aggression.  Women who already faced significant challenges in providing for their families while caring for children.  Russia’s adventurism only exacerbated their difficulties.  We know domestic violence and trafficking in persons thrive in conflict areas.  The SMM confirmed Ukrainian women and girls trapped in the conflict-affected areas are vulnerable to sexual violence and harassment.

We commend the SMM for highlighting the difficulties women and girls face in conflict-affected areas of eastern Ukraine, as well as the constructive role of women in dialogue and peacebuilding activities.  We encourage efforts to promote gender equality within the Mission itself, to effectively respond to reports of sexual harassment within its ranks, and to integrate gender dimensions into its daily, weekly, and thematic reports.

Russia’s refusal to open the checkpoints at Zolote and Shchastiya to civilian traffic particularly affects Women, many of them pensioners, living along the Line of Contact.  Women and girls accounted for the majority of the nearly 1,300 requests to cross between April and December 2020, per SMM reporting.  Ukraine even provided the requested buses, but Russia and its proxies refused to allow civilians to cross.  It is very difficult to understand.

More broadly, we believe—with the support of participating States of this Permanent Council—OSCE’s Field Missions and Institutions can do more to help local and national governments reduce gender-based discrimination and increase women’s role in providing security and keeping the peace.  The United States stands ready to assist the OSCE in its efforts, particularly in eastern Ukraine and Russia-occupied Crimea.

Although the Special Monitoring Mission reported significantly lower levels of violence along the Line of Contact as compared to previous years, last week witnessed several hundred ceasefire violations.  We were particularly concerned by reports of ceasefire violations in the vicinity of the Donetsk Filtration Station, which were heard as a bus ferrying station workers passed through the area.  We are also concerned about this week’s Spot Report detailing an incident in which Russia-led forces detained an SMM patrol for five hours after the monitors—correctly— refused to allow their vehicles to be searched.  The SMM must have full and unhindered movement throughout all of Ukraine in order to fulfill its mandate.

The United States fully supports Ukraine’s sovereignty, independence, and territorial integrity within its internationally recognized borders, including its territorial waters.  We do not, nor will we ever, recognize Russia’s purported annexation of Crimea.  We join our European and other partners in affirming that our Minsk-related sanctions against Russia will remain in place until Russia fully implements its Minsk commitments.  The Crimea-related sanctions will remain in place until Russia returns full control of the peninsula to Ukraine.