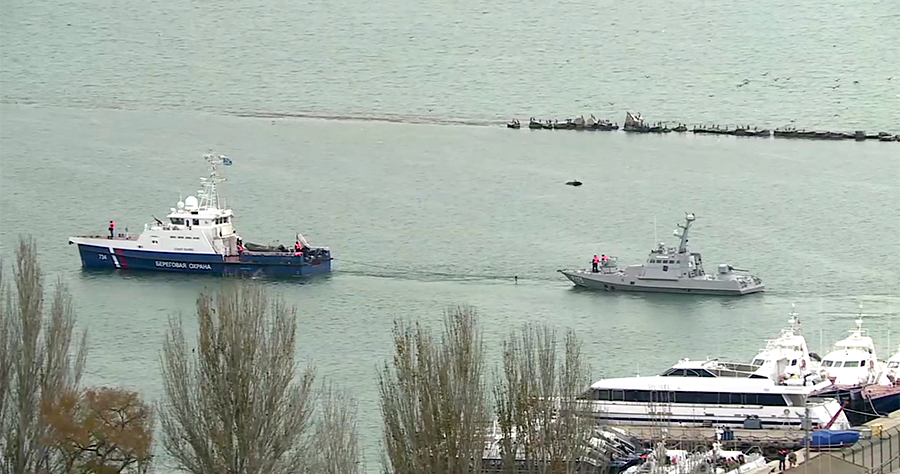 A video grab provided by the Krym 24 tv station via AP Television shows a seized Ukrainian ship being towed by a Russian coast guard in Kerch, Crimea, Nov. 17, 2019.

Next week we will travel to Bratislava for the OSCE’s annual Ministerial Council meeting. The situation on the ground in Ukraine will rightly be a main focus of discussion among Ministers. My government welcomes in particular the planned side event on Ukraine, where recently released political prisoners Oleh Sentsov and Roman Sushchenko will share their experiences at the side event.

We are encouraged by President Zelenskyy’s bold steps to improve humanitarian conditions in eastern Ukraine. The last few months have seen significant developments, and we are optimistic that continued progress is possible. This week, the Special Monitoring Mission reported the completion of construction work on the Stanytsia Luhanska bridge, which was officially opened by President Zelenskyy on November 20. The newly repaired pedestrian bridge is already improving the lives of the citizens of Ukraine in the eastern area that have endured years of delays and difficult crossings as a result of Russia’s ongoing aggression in eastern Ukraine. The SMM also reported the completion of demining activities inside the Petrivske disengagement area. As defortification continues in Zolote, the sides draw closer to returning these areas to a level of normalcy not seen since the conflict began in 2014.

Beginning with the July 21 recommitment to the ceasefire, President Zelenskyy’s administration has shown a willingness to engage constructively with Russia on a permanent solution to the conflict in eastern Ukraine. We note that Russia has finally agreed to a meeting of the Normandy Quartet, a meeting in Paris to be held on December 9. The onus is on Russia to match the commitment to peace shown by the Zelenskyy administration. Moscow must demonstrate the political will needed to bring about a peaceful and permanent solution to the conflict it ignited when Russia violated Ukraine’s borders and entered the Donbas in April 2014. Russia must honor its Minsk commitments to withdraw troops and implement a real and lasting ceasefire. The United States encourages Russia to work with Ukraine, France, and Germany to identify a concrete path toward peace in eastern Ukraine in accordance with the Minsk agreements.

The Special Monitoring Mission continues its important work under difficult and often dangerous conditions, as my colleague was saying. Monitors observed two Russian convoys in Ukraine on November 21. In both cases, several of the convoy vehicles were identified as carrying “Humanitarian Aid from the Russian Federation.” Neither the SMM nor the Observation Mission at the Russia-Ukraine border was allowed to confirm the contents of these vehicles, since Russia continues to prevent the inspection of such vehicles by OSCE monitors. We call upon Russia to lift its restrictions on the Observation Mission’s work and to agree to the expansion of the Mission’s geographic scope along the whole of the international border between Ukraine and Russia, a matter we hope to address next week in Bratislava.

Over the last week, the Special Monitoring Mission’s movements were restricted again, mostly in the areas not under the control of the Ukrainian government. We call again on Russia to direct the forces that it arms, trains, leads, and fights alongside in eastern Ukraine to afford the SMM the full access it needs to fulfill its mandate.

Last week, Russia returned the three Ukrainian vessels it seized in November 2018 as a part of its attempt to exert authority over the Black Sea, in particular in the Sea of Azov. This is a constructive step, but like a recovered stolen automobile, the three returned vessels were completely stripped of all equipment and had to be towed back to a Ukrainian port. Surely, such behavior ought to be beneath the dignity of any participating State in this organization.

In Crimea, Russia continues to commit serious abuses against Crimean Tatars, ethnic Ukrainians, and others who oppose Russia’s occupation of the peninsula. The environment for religious freedom is deteriorating. We were troubled by the news that last week a court ordered the demolition of a Ukrainian Orthodox chapel in Yevpatoria, claiming it had been built without the proper permits. We condemn this attack on the Orthodox church by the Russian government authorities. We also note that a Muslim cemetery in a Crimean Tatar community was vandalized on November 25.

We are also concerned by reports that on November 25 a court fined journalist Yevgeniy Haivoronskyy under a new law banning the “disrespect” of state officials online because of an August social media post that purportedly insulted President Putin.

We remain concerned over the welfare and call for the immediate release of the more than eighty Ukrainians that Russia has imprisoned in its campaign of repression of those opposed to its occupation.

Mr. Chairman, the United States fully supports Ukraine’s sovereignty, independence, and territorial integrity within its internationally recognized borders, including its territorial waters. We do not, nor will we ever, recognize Russia’s purported annexation of Crimea. There have been some recent reports, that perhaps, some social media outlets are suggesting that Crimea is now a part of Russia. We reject this, and condemn it. We join our European and other partners in affirming that our Minsk-related sanctions against Russia will remain in place until Russia fully implements its Minsk commitments. The separate, Crimea-related sanctions will remain in place until Russia returns full control of the peninsula to Ukraine.