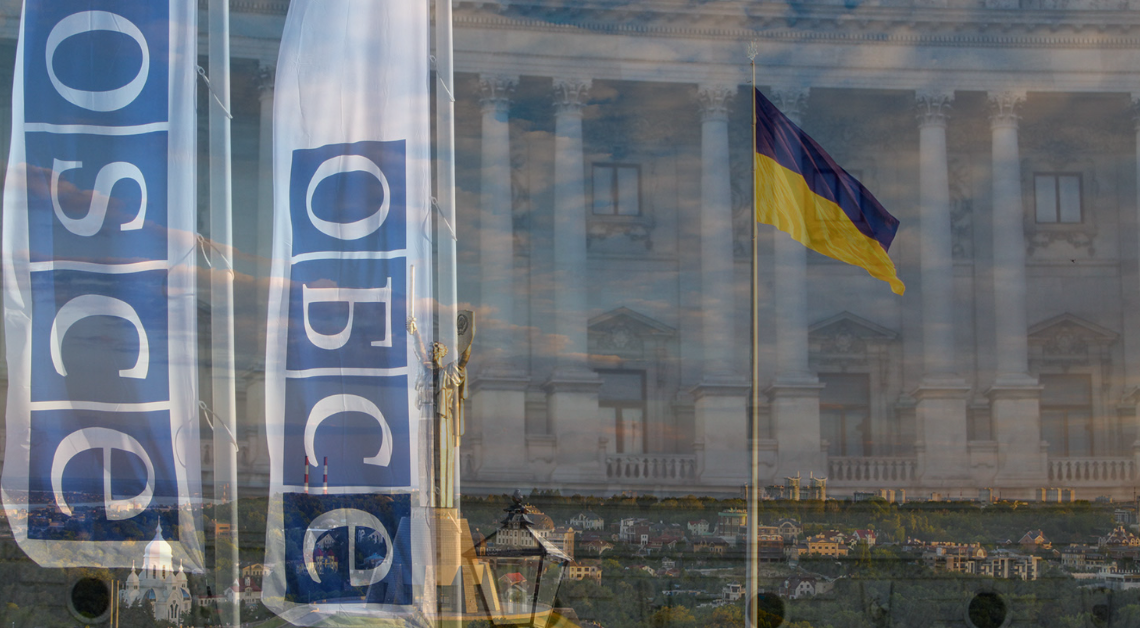 For seven years, Russia has orchestrated a large-scale hybrid campaign against Ukraine, while denying its involvement and obstructing progress toward a peaceful resolution of the conflict.  Now Russia is further escalating tensions through its flash military build-up in occupied Crimea and on Ukraine’s eastern flank.  Over the last few weeks, participating States of this Permanent Council watched as Russia crafted its latest false narrative to accompany the build-up.  It repeated elements yesterday in the Joint PC-FSC meeting—convened at Ukraine’s request to gain clarity regarding the situation on the ground and Russia’s intentions—even though Russia’s disinformation contradicts the facts as reported by the SMM.  We should now be very clear: Russia, and not Ukraine, is responsible for any escalation on the ground in eastern Ukraine.

Long before any actual increase in violence, our Russian colleagues suggested Ukraine was preparing to expel Russia-led forces from the Donbas region of eastern Ukraine.

In fact, there is zero evidence Kyiv has or is planning any military operation.  We’re less sure about Moscow’s plans.  Therefore, we welcomed Ukraine’s invocation of Chapter III of the Vienna Document, to seek clarity on Russia’s military activities in the region, which include the largest massing of Russian forces near and in occupied Ukraine since 2014.

While the guns fell nearly quiet in eastern Ukraine, Russia chose to obstruct peace negotiations, spread disinformation, and spew escalatory rhetoric.  At a recent Trilateral Contact Group meeting Russia went further; refusing to recommit to the ceasefire.  Russia did not participate at all in the first of the two meetings convened this week to discuss its unusual military activities, despite its long-standing role in promoting—even authoring the VDoc articles on—military transparency.  At the PC-FSC yesterday, Russia did not offer details regarding its own military activities and intentions to reassure neighbors but rather, baselessly alleged that Ukraine and the West were actually violating VDoc!

Ceasefire violations, while still lower in number than in previous years, continue, including upwards of 900 ceasefire violations in a single 24-hour period, a level of fighting not seen since before the hard-won July 27 recommitment to ceasefire ushered in the lowest levels of violence since 2014.  The Mission continues to report on restrictions on the movement of monitors, with the overwhelming majority, as usual, imposed in Russia-held areas.  We are also hearing more frequently of efforts to damage, or interfere with, the Mission’s UAVs.

And, most worrying, the SMM has reported on several civilian casualties in recent weeks, including two fatalities.  These casualties remind us the civilian communities of eastern Ukraine pay the highest price for Russia’s aggression.

Russia has not let up its grip on Crimea, where Crimean Tatars, ethnic Ukrainians, and others who oppose the occupation, are targets of repression at the hands of occupation authorities.  We are deeply troubled by the account of imprisoned RFE/RL freelance journalist Vladislav Yesypenko, who alleged he was subjected to beatings, death threats, and torture to coerce him into a confession, the tape of which was shown on Russia’s propaganda networks last month.  We call on Russia to release Yesypenko and the nearly 100 other Ukrainians it has imprisoned in retaliation for their independent journalism, activism, religious practice, or peaceful opposition to the occupation.  As we have long said, Russia’s increasing militarization of Crimea threatens our common security, a point underscored in recent weeks by Russia’s buildup of troops in Crimea and Ukraine’s eastern flank.  We condemn Russia’s continuing conscription of Crimean men into its Armed Forces, which is inconsistent with international humanitarian law.

Russia’s international reputation has suffered greatly because of the conflict it fomented and continues to fuel in eastern Ukraine.  We call on Russia to cease its provocations and escalatory rhetoric and engage in good faith negotiations to bring an end to this needless conflict.

Madam Chair, the United States fully supports Ukraine’s sovereignty, independence, and territorial integrity within its internationally recognized borders, including its territorial waters.  We do not, nor will we ever, recognize Russia’s purported annexation of Crimea.  We join our European and other partners in affirming our Ukraine-related sanctions against Russia will remain in place until Russia fully implements its Minsk commitments and Russia returns full control of Crimea to Ukraine.