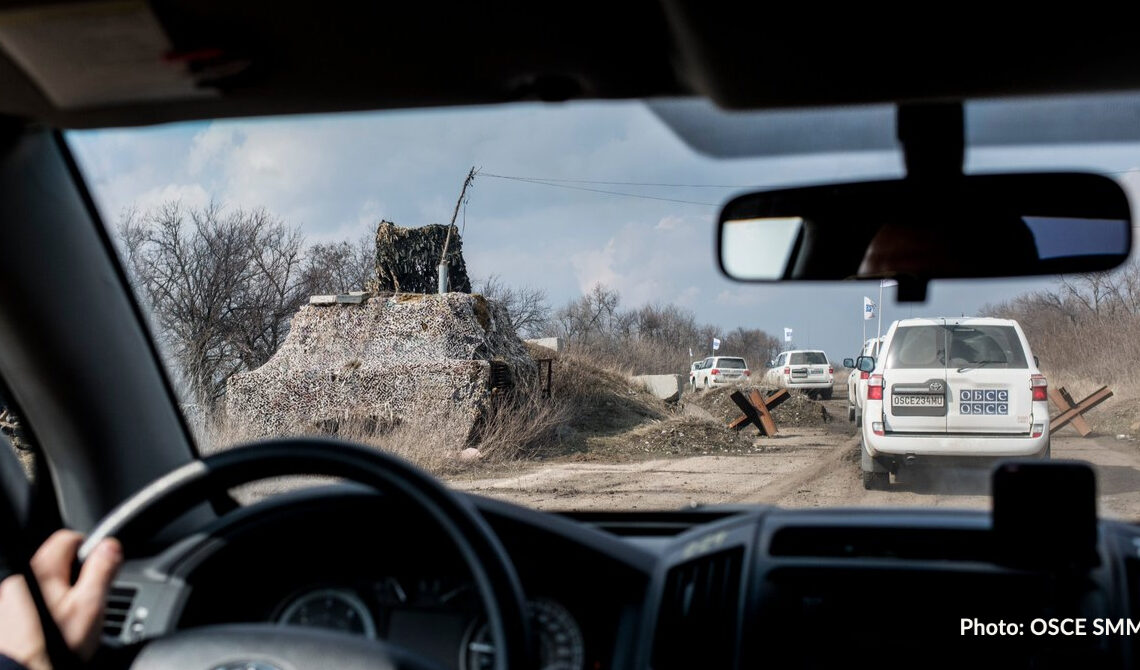 As delivered by Chargé d’Affaires Courtney Austrian
to the Permanent Council, Vienna
April 29, 2021

Ceasefire violations rose in eastern Ukraine as Russia unilaterally massed troops along its border with Ukraine and in Crimea.  Between July and November of 2020, the Special Monitoring Mission reported approximately 600 ceasefire violations per month.  That number increased to around 2,800 monthly violations between December and January 2021.  And, now, in the first 25 days of April, the SMM reported more than 6,600 total ceasefire violations.

In Russia-controlled territory in eastern Ukraine, Russia-led forces frequently impeded the movement of SMM monitors on top of the existing pandemic restrictions imposed by the Kremlin’s proxies.  Consequently, the Mission, and the participating States, rely considerably on UAVs to provide the most accurate snapshot of the situation on the ground.  The continued targeting of these valuable assets cannot—and must not—be tolerated.

We further call on Russia to direct the forces it arms, trains, leads, and fights alongside to cease their harassment of the Special Monitoring Mission.  This week— once again—the SMM confirmed multiple movement restrictions.  The vast majority of these occurred, as we have come to expect, in Russia-controlled territory in eastern Ukraine.  The SMM’s mandate, as agreed to by all the participating States—including Russia—affords it the freedom to operate throughout all of Ukraine and the monitors should be allowed to fulfill their reporting responsibilities without interference.  Restricting the SMM’s movement only serves to hinder the peaceful resolution of this multi-year conflict.  But maybe that’s the Kremlin’s intent?

Certainly, Russia continues to actively obstruct the peace process.  While it fuels the conflict it launched more than seven years ago; in recent months, Russia sought to heighten tensions on the ground while denying it is a party to the conflict and perpetuating the false narrative that Russia is an impartial mediator.

In recent weeks, Russia mobilized large numbers of its forces along its border with Ukraine and in occupied Crimea, all the while casting ludicrous accusations that Ukraine was responsible for escalating tensions.

We have seen the reports Russia has begun to withdraw some of its forces from around Ukraine’s borders.  A complete withdrawal of the additional troops and weapons Russia massed in occupied Crimea and around Ukraine would be a very welcome development.  Given the fact Russia made similar claims in 2014 just before unleashing seven years of aggression, the United States will monitor the situation vigilantly and remain in close communication with our Ukrainian counterparts and other partners, as well as those from Allied nations.

We call on Russia to refrain from any further escalatory actions and immediately take the necessary steps to de-escalate tensions in the region, including by rescinding its actions to block certain vessels in parts of the Black Sea, by recommitting to a ceasefire in the Donbas, and by ceasing all its destabilizing activity in Ukraine.

Unfortunately, in Russia-occupied Crimea, human rights abuses are a now-daily occurrence.  Crimean Tatars, ethnic Ukrainians, and others are targeted by occupation authorities and harassed, detained, imprisoned, and even tortured for opposing Russia’s occupation and militarization of the peninsula.

On April 20, a court fined the editor of Crimean Tatar newspaper Qirim for an article mentioning a UN report on the Crimean Tatar Mejlis, the self-governing body of the Crimean Tatars, because the article did not label the Mejlis an “extremist organization,” per Russian edict.  And on April 26, Imam Yusif Ashirov was charged for the second time with “illegal missionary activity” for holding Friday prayers at his mosque, in apparent retaliation for his independence from the state-supported Muftiate.

The United States calls on Moscow to release all the Ukrainian political prisoners it holds.  We further call on Russia to end its occupation of Crimea and remove its forces, hardware, and materiel from eastern Ukraine.

Madam Chair, the United States fully supports Ukraine’s sovereignty, independence, and territorial integrity within its internationally recognized borders, including its territorial waters.  We do not, nor will we ever, recognize Russia’s purported annexation of Crimea.  We join our European and other partners in affirming our Ukraine-related sanctions against Russia will remain in place until Russia fully implements its Minsk commitments and returns full control of Crimea to Ukraine.