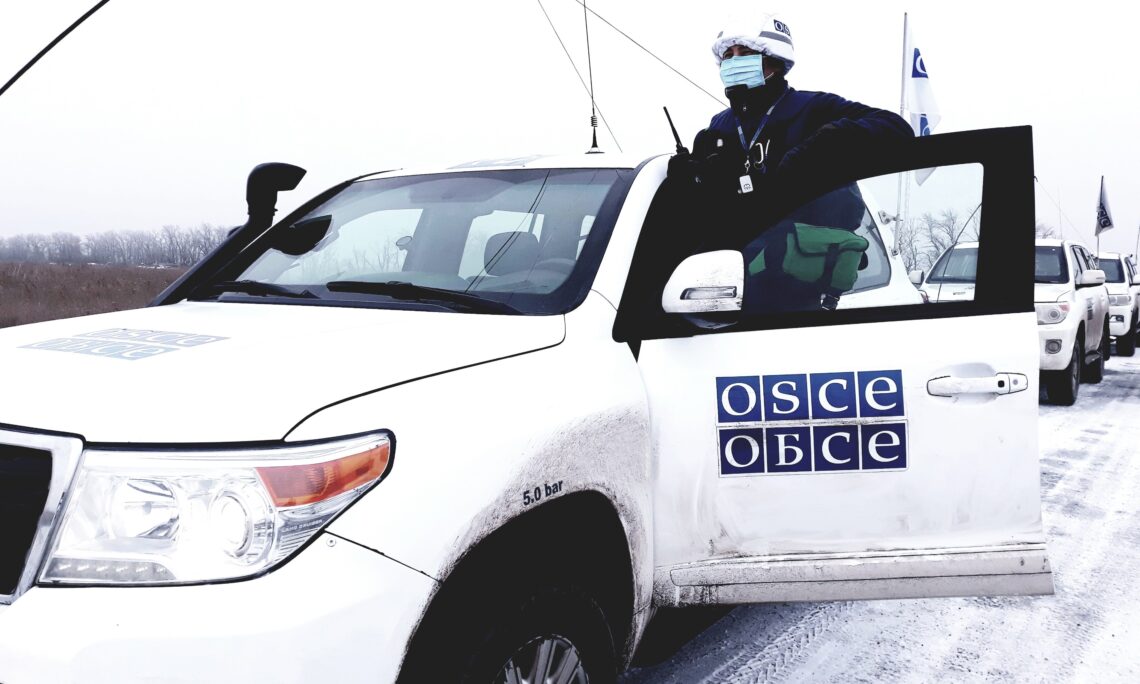 In 2020 the SMM corroborated 128 civilian casualties: 23 fatalities and 105 injuries. (@OSCE_SMM)
On Russia’s Ongoing Aggression against Ukraine and Illegal Occupation of Crimea

We continue to closely monitor Russia’s announced ‘drawdown’ of its military equipment and personnel from Ukraine’s eastern border.  It’s worth noting that Chief of the General Staff of the Armed Forces and General of the Army Gerasimov confirmed Moscow’s recent military activity included “300,000 servicemen, 35 thousand units of weapons, military and special equipment…80 ships and boats, as well as about 900 aircraft, including 15 long-range aircraft and 40 military transport aircraft.”  It is concerning that Russia attempted to bolster its own political agenda by threats and intimidation.

Unfortunately, this most recent provocation by Moscow fits neatly into a larger pattern of its destabilizing activities in the region.  To argue, as Russia did, that a military activity involving a force of this size required no notification under the Vienna Document frankly strains credibility.  The United States supported Ukraine’s invocation of the “unusual military activities” provision of the Vienna Document.

We emphasize once again that there is no threshold number of troops or equipment for a concerned participating State to trigger the “unusual military activities” risk reduction mechanism of the Vienna Document.  Russia has no excuse for its failure to live up to its Vienna Document commitment to engage in this process.

Rather than addressing Ukraine’s legitimate request for information, Russia claimed these activities were “routine” and “planned,” and it deflected by stating details on these activities were posted on the Russian Ministry of Defense’s public website.   Russia’s insufficient response does little to assuage our concerns about its intent.

In advance of its provocative military activities Russia attempted to frame Ukraine as the instigator of a fictional military escalation for which there was never any evidence, while Russia itself increased its military presence on Ukraine’s borders.  The Kremlin’s build-up was not fictional; it was very real.

There’s nothing new about Russia’s behavior.  Last week, Russia again attempted to distance itself entirely from the conflict and asserted Ukraine was hampering peace negotiations by refusing to directly negotiate with Moscow’s proxies and supported groups in eastern Ukraine.  Russia manufactured this conflict and continues to control it, ratcheting up or down the tension and violence for its own ends.

It is Russia that must cease its intransigence and begin implementing the commitments it made under the Minsk agreements, starting with the security measures.

Movement restrictions on the SMM increased at an alarming rate in recent weeks.  Russia-led forces demanded customs forms from Monitors, dramatically increased jamming of UAVs, and outright tampered with cameras.  Russia hopes we will become accustomed to its heightened levels of obstruction, and accept this as the new normal.  We will not.

We strongly object to the all-too-common harassment of monitors and obstruction of their work by Russia-led forces, which have further restricted the SMM’s movement both across the Line of Contact and between the areas it controls in the Donetsk and Luhansk oblasts.  The SMM should be given full movement throughout all of Ukraine to fulfill its mandate, including Crimea.

Russia’s occupation of Crimea remains a key component of its efforts to destabilize Ukraine.  The United States condemns the targeting for repression and harassment of Crimean Tatars, ethnic Ukrainians, and others by Russian occupation authorities.  Journalists, bloggers, and civil society activists are routinely detained, arrested, or imprisoned for speaking out against the occupation regime.

Despite Russia’s efforts to silence these individuals, and to limit the access of international human rights organizations to Crimea, their stories still reach the international community, and I assure you, we are listening closely.

We call on Russia to release all the Ukrainian political prisoners it holds.  We demand Russia end its occupation of Crimea and remove its forces and materiel from both Crimea and eastern Ukraine.  It is time for Moscow to finally engage in a constructive manner to help bring about a peaceful resolution to the conflict it began in 2014.