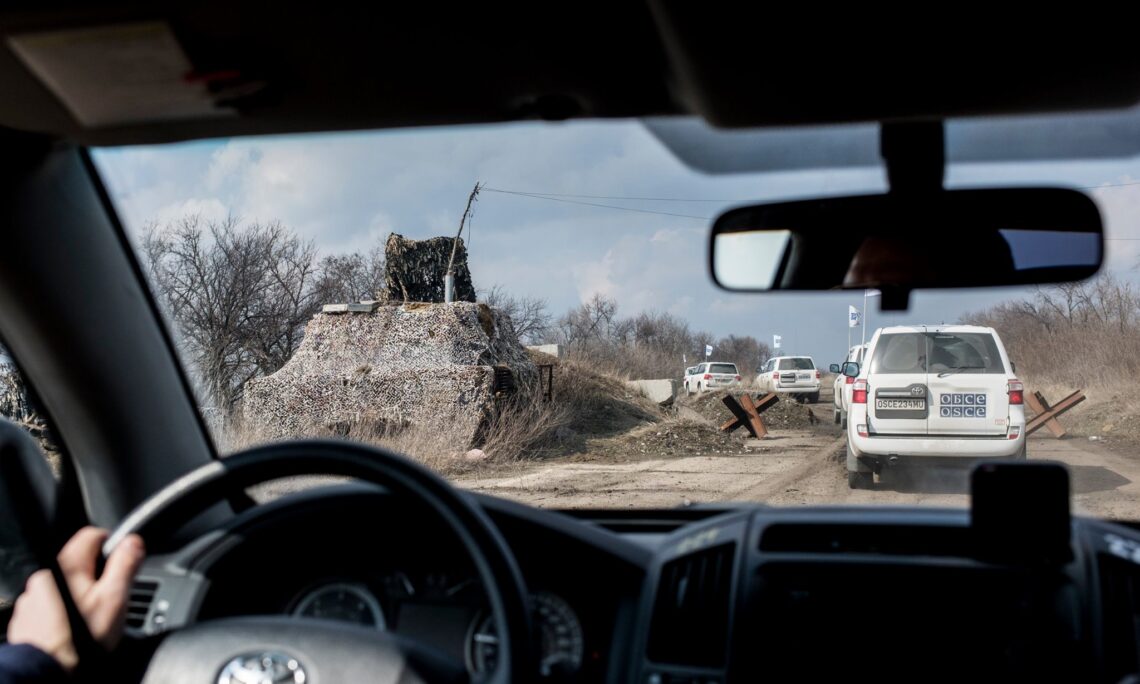 The OSCE Special Monitoring Mission to Ukraine's (SMM) unimpeded, unrestricted and unconditional freedom of movement is critical to the implementation of its mandate. (OSCE Photo)

Significant numbers of Russian military forces remain in place along the Russia-Ukraine border, in Russia-occupied Crimea, and in eastern Ukraine along the Line of Contact within Ukraine.  It has been nearly two months since Ukraine invoked the Vienna Document’s paragraph 16 risk reduction mechanism with respect to Russia’s aggressive and unilateral build-up of military forces in March and April.  Moscow refused to provide a substantive response.

Russia has increased tensions in an already volatile region.  Thanks to Ukraine’s restraint in the face of Russia’s military activity, the conflict in the Donbas did not escalate, though violence continues on a daily basis.  It is important we remember Ukrainian soldiers and civilians continue to be wounded and killed because of Russia’s aggression.  We urge Russia to fully reverse its military buildup and recommit to the OSCE-brokered ceasefire.

The situation on the ground is far from calm.  On the contrary, after falling to historically low levels last fall, ceasefire violations have steadily increased in recent months.  While they remain lower than in some past years, the Special Monitoring Mission is once again reporting hundreds of daily ceasefire violations on a regular basis.

As the international community sought to reduce tensions surrounding Russia’s most recent provocation, Moscow took additional steps to undermine the peaceful resolution of the conflict it continues to foment and fuel in eastern Ukraine.  Right now, Russia is pursuing another step which, if implemented, will have a negative impact on the ground: Moscow inexplicably opposes the standard four-month extension of the mandate of the Observer Mission at the Russian Checkpoints at Gukovo and Donetsk.  Instead it wants to limit the extension to two months.

The Observer Mission—already significantly boxed in by Russia—is a valuable confidence building tool providing participating States with additional insight into the situation on the ground in eastern Ukraine.  A two-month extension would burden the Border Observer Mission with additional administrative complications, further reducing the OSCE’s ability to monitor the border, as stipulated in the Minsk Protocol.

We again must ask Russia: What do you seek to hide?  As a member of this Permanent Council and a signatory to all three Minsk agreements, Russia made solemn commitments to advance a peaceful resolution of the conflict in eastern Ukraine.

Its actions regarding the Observer Mission clearly call into question statements by Russia implying a real interest in ending the violence in Ukraine and facilitating a political settlement.  We urge Russia to reconsider its proposal to cut the mandate of the Observer Mission in half.  We see no gain for security and mutual confidence in such a course; we need cooperation and transparency, not unilateralism and veiled threats.

In Crimea, Russia’s occupation authorities subject Crimean Tatars, ethnic Ukrainians, and members of other ethnic and religious minority groups on the peninsula to harassment, arrest, detention—even reports of torture—as part of Moscow’s campaign to punish peaceful opposition to the occupation.  Russia blocks the SMM and international human rights monitoring groups from the Peninsula, yet information regarding Russia’s repression continues to reach us.

This week marks the fifth anniversary of the disappearance of Ervin Ibragimov, a Crimean Tatar civic activist who has not been seen since he was forced into a van by traffic police in Bakhchisarai on May 24, 2016.  He is one of twelve Crimean Tatars who have disappeared without a trace since the occupation began.  We ask Russia: Where is Mr. Ibragimov?  Why was the investigation into his disappearance closed?  Dozens of other critics of the occupation continue to languish in Russian prisons.

Server Mustafayev, the coordinator of the Crimean Solidarity human rights movement, is serving a 14-year sentence in a Russian prison in retaliation for his activism to expose the abuses of the occupation.  We will not forget any of the Ukrainian political prisoners currently held by Russia, more than 100 in all.

We further condemn Russia’s efforts to harass and intimidate Crimean Tatar leaders, including the May 24 request by prosecutors for a nine-year prison sentence in the in-absentia trial of Mejlis Chairman Refat Chubarov.

We call on Russia to end its occupation of Crimea and to release all Ukrainian political prisoners.  We further call on Russia to fulfill the commitments it voluntarily undertook on September 5 and 14, 2014 in Minsk, to remove all military troops and hardware from eastern Ukraine.