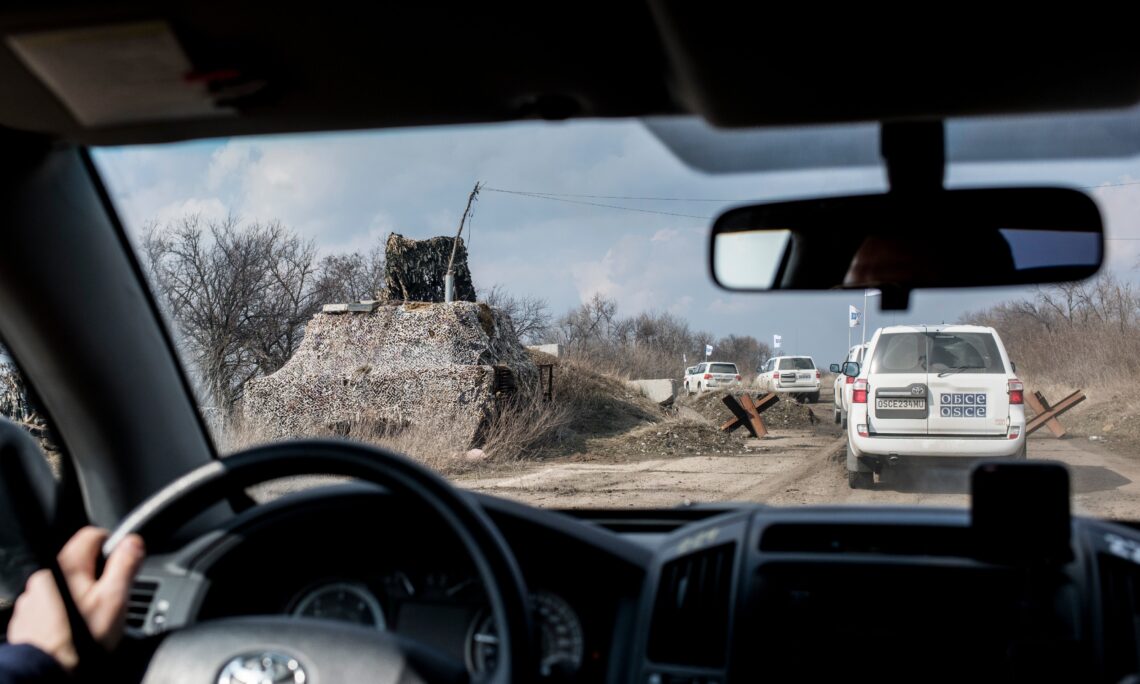 The SMM also continues to report on instances in which Russia-led forces restrict the Freedom of Movement of its monitors. (OSCE/SMM)

More than two months ago, Russia unilaterally built up its military forces in occupied Crimea and along Ukraine’s borders to levels unseen since its invasion in 2014.  To date, Russia has failed to provide this Permanent Council with any reasonable explanation for its actions.  While Russia has repositioned its military forces and equipment, its force posture remains elevated along the Russia-Ukraine border and on Ukrainian soil in Crimea, under Russia’s occupation.

Last week, our Russian colleague made a spirited effort to defend an indefensible position.  From his Statement, we could gather Russia is frustrated with the complications resulting from its military adventure in Ukraine.  On that point, we agree.  The truth is every death, every injury, every instance of infrastructure damage reported in eastern Ukraine is directly attributable to the Kremlin, which launched this conflict in 2014 in an attempt to destabilize its neighbor and prevent Ukraine’s realization of its sovereign choice to integrate fully with Europe.  Rather than pursue a serious effort to resolve the conflict it began, Russia doubled down on its same tired lines, denying its role as the aggressor and spinning fantasies about “foreign masters” and “coups d’état”.

The Special Monitoring Mission’s factual and dispassionate reports detail a volatile and worrying situation in eastern Ukraine.  Last week, the SMM reported more than 1,000 ceasefire violations over a seven-day period.  The SMM continues to observe heavy weapons in areas where they should not be per the Minsk agreements.  The deteriorating security situation in the Disengagement Areas endangers civilians and impedes progress in the Trilateral Contact Group.  The SMM continues to document civilian casualties, as well as damage to civilian infrastructure.

The SMM also continues to report on instances in which Russia-led forces restrict the Freedom of Movement of its monitors.  The Mission also documents, on a near-daily basis, signals jamming or smalls-arms fire directed at its UAVs.  Last week, several participating States noted SMM reports on the presence of a Russian-made electronic warfare system in eastern Ukraine.  Ironically, this system was observed and recorded by one of the UAVs these Russian systems target.  The United States calls on Russia to cease its efforts to impede the work of the SMM.  The United States calls on Russia to afford SMM monitors unobstructed and full Freedom of Movement to fulfil its mandate, the mandate Russia endorsed, as did we all.

The United States remains deeply concerned about the deteriorating human rights situation in Russia-occupied Crimea.  Although Russian occupation authorities block the SMM and other international monitoring organizations from Crimea, we receive constant updates on the occupation authorities’ harassment, detention, imprisonment—or worse—of Crimean Tatars, ethnic Ukrainians, and others.  Journalists are particularly at risk.  Russia’s occupation authorities essentially eradicated all independent Crimean Tatar media outlets from the peninsula and target for repression any that dare oppose the occupation.  Server Mustafeyev—serving a 14-year sentence in retaliation for his leadership of the Crimean Solidarity human rights movement—has been unjustly held for years.  For others, like Vladyslav Yesypenko, who was detained in March on specious charges of espionage in retaliation for his independent journalistic activity, the nightmare is only beginning.  He reportedly was tortured in the custody of Russia’s occupation authorities.  Just last week, a prosecutor in Rostov on Don demanded four Crimean Tatars from the city of Alushta—accused of involvement in the Islamic group Hizb ut-Tahrir—serve draconian sentences of 14-19 years in prison.  Without evidence, Russia designated Hizb ut-Tahrir as “extremist” and applied that designation in occupied areas of Ukraine.  In reality, Russian authorities targeted these four Crimean Tatars, as they do other religious minorities, for their peaceful religious practice.

We call on Russia to cease its harassment of Crimean Tatars, ethnic Ukrainians, and others and to release all Ukrainian political prisoners it holds.  We further call on Russia to end its occupation of Crimea and to remove all its forces and equipment from the territory of Ukraine in keeping with the commitments it made as a signatory to all three Minsk agreements.

Mr. Chair, the United States fully supports Ukraine’s sovereignty, independence, and territorial integrity within its internationally recognized borders, extending to its territorial waters.  We do not, nor will we ever, recognize Russia’s purported annexation of Crimea.  We join our European and other partners in affirming our Ukraine-related sanctions against Russia will remain in place until Russia fully implements its Minsk commitments and returns full control of Crimea to Ukraine.