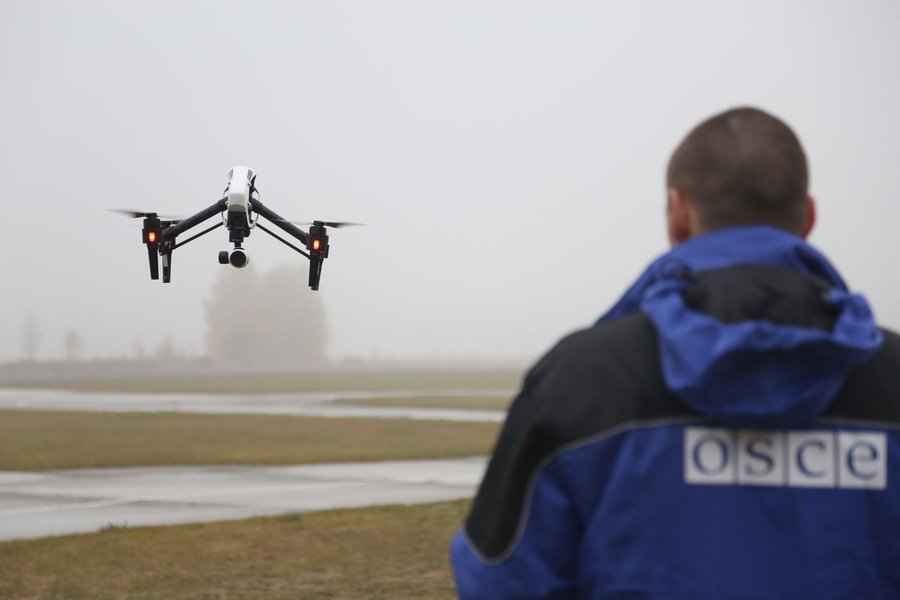 While conducting an announced mini-UAV flight in an area north of Donetsk controlled by Russia-led forces, the Mission heard five bursts of small-arms fire aimed at the UAV. (Photo/OSCE)

Madam Chair, last week, our Russian colleague noted Russia’s interest in seeing peace return to Ukraine.  So allow me to be helpful by offering a few recommendations for Russia to achieve that goal.

While Russia trots out tired denials of its direct role in the conflict in Ukraine, the Special Monitoring Mission documents a stream of ceasefire violations from Russia-controlled territory, which undermine the peace process and endanger the lives and welfare of Ukrainians.  Last week, the SMM was restricted from moving past a checkpoint of armed formations in southern Donetsk.  Its UAVs again experienced multiple instances of GPS signal interference and its long-range UAV flight was cancelled due to dual GPS signal interference, assessed as jamming.  While conducting an announced mini-UAV flight in an area north of Donetsk controlled by Russia-led forces, the Mission heard five bursts of small-arms fire aimed at the UAV, forcing the monitors to land it and depart the area.

If Russia truly wants peace in Ukraine, it must cease impeding the work of the SMM and afford its monitors the full Freedom of Movement needed to fulfil their mandate.  We all agreed to this mandate here in the Permanent Council, yet Russia actively undermines its OSCE commitments through its actions.

Russia seeks to consolidate its control over portions of eastern Ukraine by non-military measures, including legal, educational, and economic leverage—all aimed at systematically obstructing Ukraine’s reintegration efforts.  For example, in the run up to September 2021 Russian State Duma elections, Russia encouraged its politicians to campaign throughout the Donbas to pressure those issued Russian passports to vote.  Clearly, ‘passportization’ in Donbas is just another component of Russia’s malign influence campaign aimed at destabilizing Ukraine and obstructing Ukraine’s chosen path of Euro-Atlantic integration.  The SMM is even reporting recruiting posters for Russia-led forces in eastern Ukraine.  Moscow’s incredulous claim to not be a party to this conflict—while its politicians pander in Russia-controlled parts of Ukraine for representation in the Russian Duma—is absolutely absurd.

While Russia falsely claims Crimea as its own, it certainly has not shown an interest in the welfare of its residents.  The human rights situation in Russia-occupied Crimea is deeply concerning to the international community, and though Russia blocks the SMM from operating in Crimea, the truth will come out.

Every week, we learn about new cases of harassment, arrest, imprisonment, and abuse of Crimean Tatars, ethnic Ukrainians, or others who oppose the occupation and/or expose abuses by Russia’s occupation authorities.  We call for the release of Dzhemil Gafarov, a 59-year-old Crimean Tatar civic activist imprisoned in Crimea on baseless terrorism charges, who just had a heart attack following a year of reportedly improper medical treatment for his life-threatening kidney disease.  We also note with concern that Russia continues to restrict Crimean Tatars’ ability to celebrate their holidays and enjoy their culture.  On June 22, police issued formal warnings to multiple Crimean Tatar activists not to engage in any “illegal gatherings” or “extremist activity” in connection with the June 26 Day of the Crimean Tatar Flag.  This is just one more example of the shameful lengths to which Russia has gone to criminalize Crimean Tatar identity.

Despite Russia’s consistent efforts to muddy the waters on the Ukraine conflict here before the Permanent Council and everywhere else, the bottom line is that no one buys Moscow’s story.  In fact, on June 13, the leaders of the Group of Seven Major Industrialized Nations met in Cornwall, UK, to deliver a wide-ranging Communiqué, in which they made clear they supported Ukraine’s sovereignty, territorial integrity and independence and that “Russia is a party to the conflict in eastern Ukraine, not a mediator.”  G-7 leaders also “affirmed support for the Normandy Process to secure the implementation of the Minsk agreements, and called on Russia to engage constructively and recommit to the ceasefire.”

Madam Chair, if Russia truly wants to pursue peace in Ukraine,.it must cease its harassment of Crimean Tatars, ethnic Ukrainians, and other members of ethnic and religious groups, and to release all those it holds as political prisoners in Crimea.  We further call on Russia to end its occupation of Crimea, remove its forces and equipment from eastern Ukraine, and recall the commitments it made as a signatory to all three Minsk agreements.