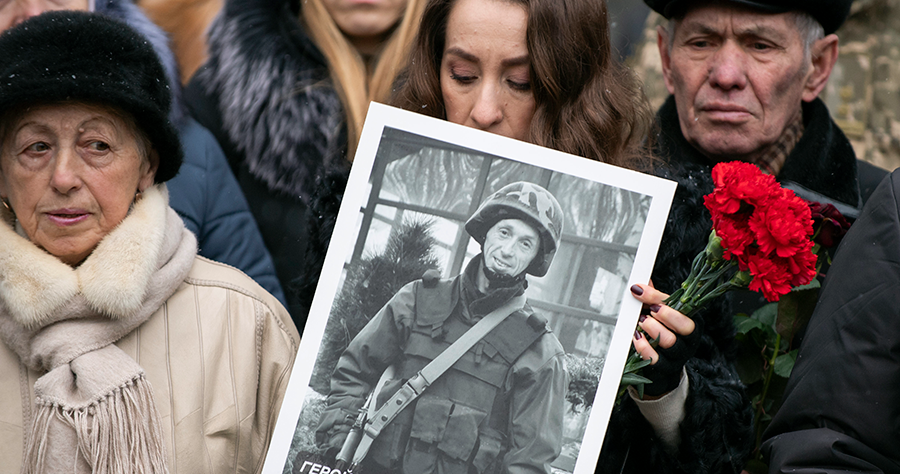 A relative holds photo of a soldier killed defending Donetsk airport in 2014-15 in a war conflict with Russia-backed separatists during a commemorating ceremony in Kyiv, Ukraine, Monday, Jan. 20, 2019. (AP)

The subject that we are talking about today is the ongoing conflict in eastern Ukraine and Crimea. I think everyone hopes that there will ultimately be a conclusion of the Trilateral Contact Group efforts and the efforts that are being made with the Normandy Four to achieve a solution– a political and diplomatic solution– to this that is satisfactory after all of the processes are gone through. Every country in this room is entitled to its safety and security as presented by the Final Act, including territorial integrity. In the meanwhile, let us take stock of the Russia-instigated conflict in Ukraine as it enters its seventh year. Russia’s attempts to destabilize its sovereign neighbor in violation of the Final Act principles has resulted in the deaths of more than 13,000 Ukrainians and internally displaced more than 1.5 million more. For the hundreds of thousands of people remaining in eastern Ukraine, life is not the same and will likely not be the same again.

The United States appreciates that Albania has made resolution of the conflict in Ukraine one of its Chairmanship priorities. I hope that Prime Minister Rama’s visit to Ukraine earlier this week provided him with further insight into the situation and the ways in which it affects Ukrainians and contravenes the OSCE principles we all pledged to uphold.

The Russian delegation falsely characterizes the conflict in Ukraine as “internal,” hoping to divert attention from the fact Russia started, escalated, and fuels this conflict. This is no civil war. It is a Russia-instigated conflict that has harmed millions of people. Only when Russia is willing to demonstrate the same political resolve as President Zelenskyy can we expect to see real progress toward a peaceful resolution that is satisfactory within the principles of the Final Act and the Helsinki Accords.

We wish the new Special Representative to the Trilateral Contact Group Ambassador Heidi Grau success in her new role. The United States regrets that last week’s meeting of the TCG failed to yield any concrete progress toward a comprehensive ceasefire or the announcement of new disengagement areas. Meanwhile, the civilian population pays the price for Russia’s ongoing aggression.

Over the past week, the Special Monitoring Mission reported more than 5,000 ceasefire violations. A 12-year-old boy was injured after bringing home a device he found near his home that later exploded. Several other civilians were injured by explosive devices – people simply trying to go about their daily lives. Ten Ukrainian service members suffered wounds in one day.

The Special Monitoring Mission reported multiple sightings of Minsk-prohibited weapons, including a “ZU-23” 23 mm anti-aircraft gun that was fired near an SMM patrol in a non-government-controlled area west of Luhansk. On multiple occasions, the Mission reported small arms fire, or jamming, directed at the Mission’s UAVs.

Again this week, Russia-led forces denied access to SMM monitors in 21 separate incidents, all in areas controlled by Russia-led forces. We remind Russia that the SMM’s mandate demands the monitors enjoy unimpeded movement throughout Ukraine’s internationally recognized territory. Instead, the monitors are blocked from observing the vast majority of the international border between Russia and Ukraine. Even in the areas in which the Border Observation Mission is permitted to operate, Russia prohibits the review of the contents of trucks marked as “humanitarian aid” that have so frequently crossed from Russia into Ukraine without Ukraine’s permission. Such prohibitions limit the ability of our monitors to provide this Permanent Council with an accurate portrayal of the breadth of Russia’s campaign against Ukraine.

We ask a lot of the monitors, and the success of this landmark effort is a shared responsibility. To that end, the United States encourages all participating States seated at this table today who have a commitment to the SMM, to contribute to the SMM’s funding. We must ensure the mission has the resources it needs to fulfil its mandate and contribute to the resolution of this conflict and this remains an open issue that is on the desk of every Permanent Representative seated in this room.

As Russia perpetuates the fighting in eastern Ukraine, it occupies Crimea on the pretense of a sham referendum condemned by the international community. The United States is deeply concerned over the humanitarian situation in Crimea, where opponents of the Russian occupation authorities face harassment, detention, arrest, and imprisonment. Former detainees have detailed horrific abuse and instances of torture.

We are concerned about growing restrictions on religious freedom in Crimea. On January 14 in Yalta, the closed-door trial began of Jehovah’s Witness Artur Gerasimov, who, because of his peaceful religious practice, is charged with “organizing the activities of an extremist organization” – charges that have often resulted in 6-year prison sentences for Jehovah’s Witnesses in Russia. On January 15, the trial began of Simferopol Imam Rasim Dervishev, who is accused of conducting so-called “illegal missionary activity” for leading Friday prayers at the mosque that he heads. Observers believe the charges were brought in retaliation for his perceived disloyalty to the occupation authorities.

We share the concerns expressed by Representative for the Freedom of the Media Desir regarding occupation authorities’ January 18 decision to impose a 34-year entry ban on Ukrainian journalist Taras Ibragimov, who works for Radio Free Europe/Radio Liberty’s Crimea service. We call on Russian occupation authorities in Crimea to cease efforts to stifle the free flow of information about the situation in Crimea, and allow citizens of Ukraine to move within their own country. Crimea remains an integral part of Ukraine, and these violations run counter to the fundamental principle of freedom of information of the Final Act.