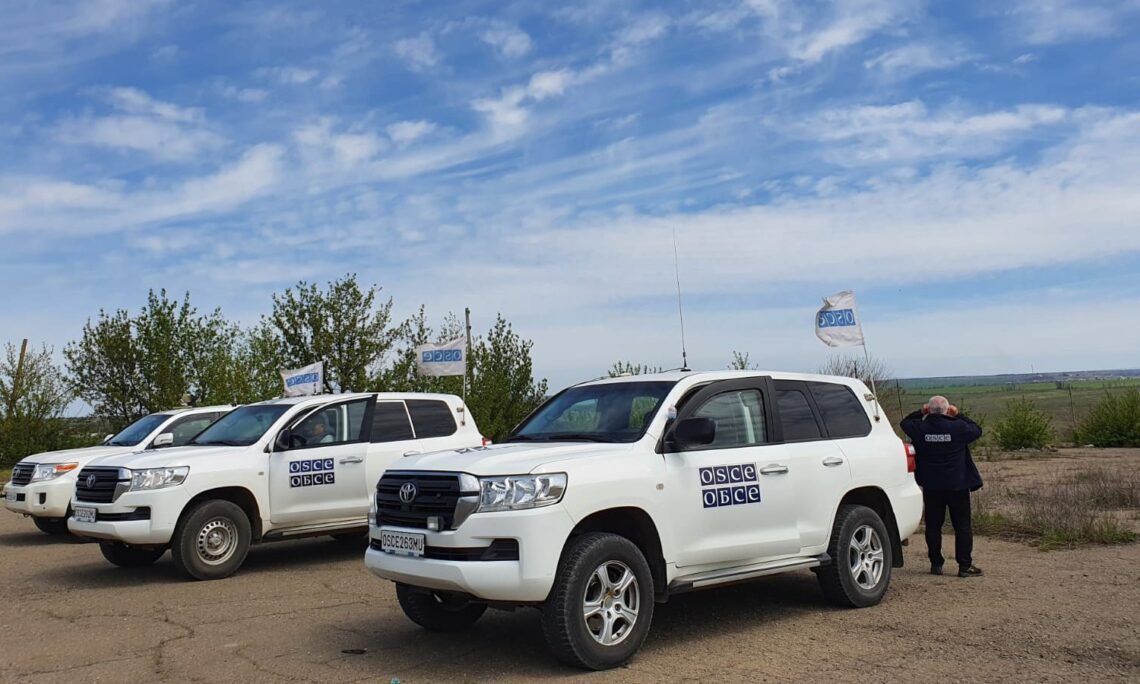 The United States is concerned by the increasing frequency of Russia-led forces hindering the work of the SMM. (OSCE/SMM)

Last week, Special Representative Grau called the agreement on Measures to Strengthen the Ceasefire the highest achievement of the past year.  We echo her appeal to our Russian colleagues to resume a constructive approach to negotiations, which they abandoned more than a year ago.

Since Russia exacerbated tensions in the region this March by launching a massive military buildup of troops and equipment in Russia-occupied Crimea and along its border with Ukraine, it has provided no transparency on these activities.  This is not the behavior of a government working constructively toward peace.

Last week, our Russian colleague again chose to present Moscow’s alternative reality.  Without evidence, he accused Ukraine of undermining the implementation of the Measures to Strengthen the Ceasefire, and then argued that new discussions on the TCG’s political track would not be possible until Ukraine met its commitments.  That’s Moscow’s rationale for obstructing the peace process while brushing off its own commitments as a signatory of the Minsk agreements.

Last week the SMM reported that the majority of ceasefire violations it witnessed had occurred in Russia-controlled areas northeast of Donetsk.  These violations included live-fire exercises inside the security zone in clear violation of the March 2016 TCG decision to prohibit live-fire training in the zone.  Those are the facts.  Nonetheless, while the SMM consistently reports that the majority of violations are occurring in areas of eastern Ukraine controlled by Russia-led forces, Russia consistently accuses Ukraine of ceasefire violations.

The United States is concerned by the increasing frequency of Russia-led forces hindering the work of the SMM.  Ambassadors Grau and Çevik both noted that we are seeing more and more restrictions on the SMM’s Freedom of Movement and deliberate targeting of technical and surveillance equipment.

Russia and the forces it arms, trains, leads, and fights alongside target the Mission’s UAVs and cameras on a near-daily basis through signal interference  and small arms fire.   Our Russian colleagues insist that Ukraine adhere to the very same commitments that Russia itself disrespects.  They publicly praise the work of the TCG but refuse to cooperate in a meaningful way in resolving the conflict.

Last week, a court in Russia-occupied Crimea extended the detention of Radio Free Europe/Radio Liberty freelance correspondent Vladyslav Yesypenko by six months.   He testified during a closed-door court hearing in April that he had been tortured with electric shocks, beaten, and threatened with death unless he “confessed.”  His only crime is being a journalist.  Clearly, Russia is afraid of those who dare to report the ugly truth about Russia’s occupation of Crimea.

We call on Russia to cease its harassment of SMM monitors, journalists, and others, and to release all Ukrainian political prisoners it holds.  We further call on Russia to end its occupation of Crimea, to remove all its forces and equipment from eastern Ukraine, and to meet the commitments it made as a signatory to all three Minsk agreements.

And in conclusion, Madam Chair, I too read the article by President Putin referred to by the distinguished representative of Ukraine. It is both historical fiction and highly insulting to the Ukrainian people. I join the Ukrainian Ambassador’s condemnation of this false and flawed text.