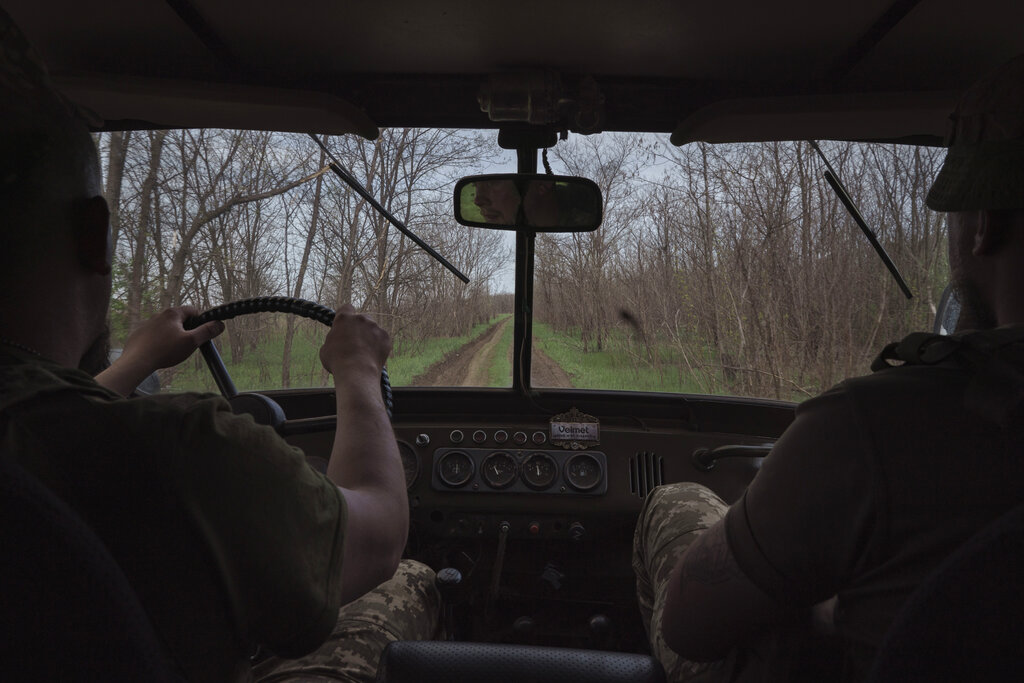 Ukrainian soldiers drive towards a fighting position on the line of separation from pro-Russian rebels near Toretsk, eastern Ukraine, Thursday, May 6, 2021. (AP Photo/Felipe Dana)

to the Permanent Council, Vienna
August 5, 2021

July 27 marked the first anniversary of the issuance and enactment of the Trilateral Contact Group’s (TCG’s) Additional Measures to Strengthen the Ceasefire.  This OSCE-brokered “re-commitment” to the Ceasefire called for in the Minsk agreements, resulted in the longest lasting and steepest decrease in recorded ceasefire violations since Russia launched its aggression in 2014.  Unfortunately, those positive results faltered in recent months and were punctuated by upswings in violence.   Yet, the SMM report for the week of July 19-25 documented a five-fold decrease in ceasefire violations from the previous week, a marked exception from the recent pattern.  We welcome more weeks like this.  While one violation is one too many, it’s worth recognizing good news when we can find it.

Good news is all too rare in this terrible conflict.  Last week, at this Permanent Council meeting, my esteemed Russian colleague derided Ukraine’s insistence Russia was a party to the conflict, suggesting his Ukrainian counterpart lived in a “hall of mirrors.”  Well, Russia is certainly an expert in distorting reality.

The Russian government continues to arm, train, lead, and fight alongside the forces wreaking havoc in parts of eastern Ukraine, while it simultaneously tries to convince the world it is not a party to the conflict and that “Crimea is part of Russia.”  The Kremlin can say it as many times as they’d like, but that does not make it true.  Russia is responsible for the chaos and instability it has caused by its seizure of Crimea and its sustained support for armed proxies and other armed groups in eastern Ukraine.  If Russia had any regard for the OSCE principles it freely adopted, it should withdraw from Ukraine immediately and acknowledge its neighbor’s sovereignty and territorial integrity.

Unfortunately, Russia is taking the counterproductive path.  The SMM continues to document efforts by Russia-led forces to impede the fulfillment of its mandate.  Last week, the Mission reported three mini-UAVs were targeted by small-arms fire during flights in Donetsk.  Other UAVs experienced multiple instances of GPS signal interference, likely caused by jamming.  Meanwhile, the SMM continues to report restrictions on its Freedom of Movement, mostly in areas of Luhansk and southern Donetsk controlled by Russia-led forces.  Just last Saturday, July 31, an SMM patrol in an area controlled by Russia-aligned forces 15 kilometers west of Donetsk reported that an armed official refused to let the Monitor conduct an announced mini-UAV flight to follow up on allegations of damaged civilian property in the area.  The armed official threatened to shoot down the UAV if it took flight.  This relentless obstruction of the good work of the SMM flouts the Mission’s mandate.

Once again, the United States calls on Russia to cease in its efforts to frustrate the work of the SMM and afford our monitors the unimpeded full Freedom of Movement required to fulfil their Mission.

The situation in eastern Ukraine remains deeply concerning.  Reportedly, the Russian political party United Russia launched electoral campaigning in the Russia-controlled parts of Donbas for the upcoming Duma elections, including July 14-15 events held in Donetsk and Luhansk.  We recall that Russia issued 500,000 Russian passports to the Ukrainian citizens of Donetsk and Luhansk.  Meanwhile, Russia’s proxy leader in Donetsk, Denis Pushylin, announced his intention to join United Russia, with numerous “deputies” following suit.  Is there really any question who is pulling the strings here?

In Crimea, Russia’s occupation authorities continue to rule by force and fear, targeting for reprisal those who oppose the occupation and seek to exercise their rights to freedom of expression, peaceful assembly and association, and religion or belief.  On August 2, Ukrainian Ombudswoman Denisova expressed concern at the fine of 10,000 rubles imposed on Crimean Tatar Emina Abdulganieva whose only crime was conducting a single-person picket protest for the release of her son, Eskender Abdulganiev.  Russia’s occupation authorities are holding him as a political prisoner for his alleged involvement in Hizb-ut Tahrir, a pan-Islamic organization legal in Ukraine.  Sixty-one-year-old political prisoner Servet Gaziev also remains unjustly detained on politically-motivated charges associated with his alleged involvement in Hizb ut-Tahrir.

We are greatly concerned about Mr. Gaziev’s health.  Gaziev has been denied appropriate medical treatment, despite numerous appeals to Russian authorities.  We call on Russia to provide Mr. Gaziev with appropriate medical attention without further delay.  And we repeat our call for the immediate release of all Crimean political prisoners held by Russia.

At the August 23 Crimea Platform Summit, we and other members of the international community, including many OSCE participating States, will stand in solidarity with Ukraine to affirm that “Crimea is Ukraine” and hold Russia to account for its abuses on the peninsula.