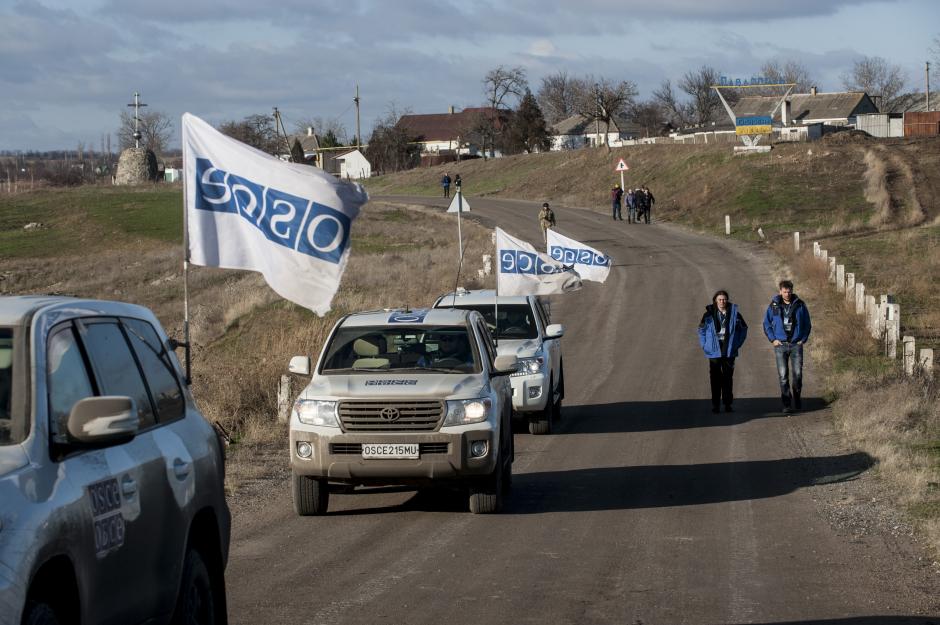 In blatant disregard of the SMM mandate, Russia and Russia-led forces continue to restrict the SMM’s movement. (OSCE/Evgeniy Maloletka)

Since last we met in regular Permanent Council, the Russia-led conflict in eastern Ukraine has continued to injure and claim the lives of Ukrainian service members and civilians.  On August 5, shelling wounded a civilian in government-controlled KrasnoHoryvka.  On August 11, shelling killed an elderly civilian in government-controlled NovoSelyvka Druha.  Every indication is these shells originated in Russia-controlled territory.

Russia bears responsibility for every casualty on both sides of the Line of Contact.  Its aggression against Ukraine is the sole driver of the daily violence that causes these tragedies.

Civilians in Donbas suffer daily due to Russia’s continued refusal to reopen the Entry Exit Crossing Points, thereby blocking almost all civilian travel across the Line of Contact.  In fact, if we look at the data, more than one million civilians crossed the Line of Contact in May of 2019, while in May 2021, just fifty-two thousand crossed, almost all on foot via the bridge at Stanytsia Luhanska.  Closure of the Crossing Points has denied elderly and disabled Ukrainian civilians access to the hard-earned pensions on which they rely, has torn families in two, and has denied people access to basic medical care.  It is past time for Russia to reopen the Entry Exit Crossing Points and stop impeding freedom of movement for Ukrainians within their own country.  Also, in blatant disregard of the SMM mandate, Russia and Russia-led forces continue to restrict the SMM’s movement, preventing the monitors from observing and reporting on their aggressive activities along the Line of Contact.

Russian proxies and Russia-led forces in Ukraine continue to exploit the pandemic by maintaining artificial barriers obstructing the SMM from crossing the Line of Contact into Russia-controlled territory.  These restrictions have little to do with countering disease spread and everything to do with preventing the SMM’s observation of Russia’s actions.

Regarding the SMM’s travel within Russian-controlled territory, I understand a SMM patrol was able to successfully cross the so-called inter-oblast boundary line on August 13.  Russia has unacceptably limited all movement between oblasts since March 2020, so I hope this is an indication this arbitrary and unacceptable interference with SMM’s movement between oblasts is at an end.

In fact, anything short of unfettered access contravenes the SMM’s mandate.  Russia-led forces routinely destroy SMM cameras and interfere with SMM UAVs, through jamming and small arms fire, in the attempt to blind the SMM to everything except what Russia chooses to reveal.

Since 2014, Russia has refused to allow SMM monitors to enter, traverse, or observe developments in Russia-occupied Crimea despite the fact that the SMM’s mandate applies throughout all of Ukraine.  No matter how many times the Russian delegation claims Crimea is Russian territory, saying it does not make it so.  Crimea is Ukraine and this was emphatically recognized by the overwhelming support Ukraine received during the recent Crimea Platform Summit and in the Special Session of the ASRC.

The United States congratulates Ukraine on a successful inaugural Crimea Platform Summit.  The Summit marks only the beginning of the work of the Crimea Platform.   In the months ahead, the United States looks forward to participation with international partners in the Platform’s working groups to identify ways we can coordinate efforts toward the return of Crimea to Ukraine, maintain a spotlight on the abuses Russia commits in Crimea and address the international security risks posed by Russia’s militarization of the peninsula.  As President Biden said only yesterday, “As we celebrate 30 years of Ukrainian independence, the partnership between our nations grows stronger and is going to become even stronger than it has been.  Ukraine and the United States have a similar value system, and a strong commitment to the fulfillment of a promise that we hope all will come forward and that is a Europe whole, free, and at peace.  And the United States remains firmly committed to Ukraine’s sovereignty and territorial integrity in the face of Russian aggression and our support for Ukraine’s Euro-Atlantic aspirations.”

We will never cease condemning Russia’s abuses in Crimea.  On August 16, a court in Rostov-on-Don sentenced four Crimean Tatar men to staggering prison terms ranging from 12 to 18 years for their alleged membership in the Islamic group Hizb ut-Tahrir, an organization that is legal in Ukraine but that Russia claims is a terrorist group.  Like dozens of other Crimean Tatars before them, these men were convicted without evidence that they planned or carried out any act of violence and have been made to pay a terrible price by Russian authorities for their peaceful religious practice.

Mr. Chair, the United States fully supports Ukraine’s sovereignty, independence, and territorial integrity within its internationally recognized borders, including its territorial waters.  We do not, nor will we ever, recognize Russia’s purported annexation of Crimea.  We join our European and other partners in re-affirming our Minsk-related sanctions against Russia will remain in place until Russia fully implements its Minsk commitments.  All Crimea-related sanctions will remain in place until Russia fully returns control of the peninsula to Ukraine.