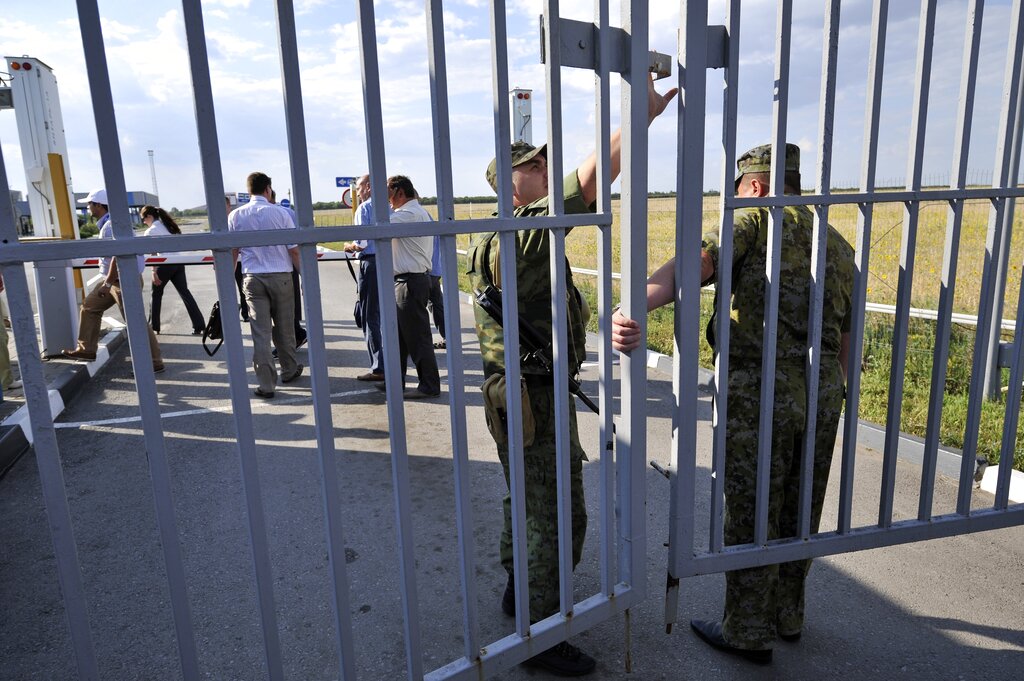 Members of OSCE (Organization for Security and Cooperation in Europe) mission walk behind a gate while visiting the Gukovo border checkpoint at Russia-Ukraine border in a small town of Gukovo. (AP Photo/Sergei Pivovarov)

I would like to begin by expressing appreciation for the SMM’s report on “Gender Dimensions of SMM Monitoring” for highlighting the plight of civilian women in eastern Ukraine and advancing the OSCE’s Women, Peace and Security Agenda.  This report illustrates the urgent need for Russia to end the violence and cease obstructing civilian movement in eastern Ukraine.

On a more somber note, as you Madam Chair have noted, today is the last day of operations for the OSCE Observer Mission at the Russian Checkpoints Gukovo and Donetsk (BOM).  As we have said previously, the United States deeply regrets the choice by the Russian Federation to block consensus on extension of the BOM’s mandate.

Last week, and most weeks, we in this Permanent Council hear Russia deny involvement in the conflict it initiated and continues to sustain in Ukraine.  Russia has brought peace negotiations to a standstill by refusing to participate unless Ukraine implicitly recognizes Russia’s proxies in Donetsk and Luhansk by directly engaging with them— a move which would only advance Russia’s false narrative that the conflict in the Donbas is an internal conflict.  It would also mask the truth – that Russia is not only a party to this conflict but began this conflict and continues to directly fuel and lead it despite signing onto to a peace deal more than seven years ago.

In addition to Russia’s assertions that it is not a belligerent, we often hear it raise the Minsk Package of Measures.  Russia’s own Ministry of Foreign Affairs website contains the text I will now read, from the 2019 Normandy Format Summit “Agreed Conclusions Document,” Russia’s MFA says, and I quote, “The Minsk Agreements continue to be the basis of the work of the Normandy format whose member states are committed to their full implementation.”  Here is the interesting part:  after the words “Minsk Agreements,” Russia’s MFA elaborates, noting the Minsk agreements consist of the following:

I urge you to focus on the fact that Russia’s own MFA rightly mentions three specific components of the Minsk agreements.  It seems to us that if Russia is going to continue to demand Ukraine fulfill its Minsk commitments, Russia should fulfill all of its own, and stop parsing the Minsk agreements to reflect only those parts Russia wishes to see enacted.

Russia’s ongoing aggression and refusal to fulfill its commitments under Minsk has led to numerous casualties, both military and civilian, on both sides of the Line of Contact.  Russia continues to supply its proxies in eastern Ukraine with weapons, funding, and leadership, making Russia not only a party to the conflict, but the prime driver of it.  Russia continues its passportization campaign in eastern Ukraine: without Ukraine’s sovereign consent, Russia held “elections” in parts of Ukraine under its control and coerced Ukrainian nationals into voting in its most recent Duma elections.  Russia continues to obstruct SMM monitors from fulfilling their mandate and routinely targets their equipment.

In Crimea, Russia continues to target Crimean Tatars, ethnic Ukrainians, and other members of ethnic and religious minority groups for harassment, intimidation, and abuse.

We call attention to the most recent report of the UN Human Rights Monitoring Mission in Ukraine released this week, which documents several credible allegations of torture by occupation authorities in recent months..

Finally, I would like to reiterate, and will continue to reiterate weekly, the United States’ support for Ukraine’s sovereignty, independence, and territorial integrity within its internationally recognized borders.  We do not, nor will we ever, recognize Russia’s purported annexation of Crimea.  As a signatory to the joint declaration of the Crimea Platform, we reaffirm that Crimea is Ukraine.  We will continue to coordinate closely with like-minded countries to ensure Crimea is rightfully returned to Ukraine.