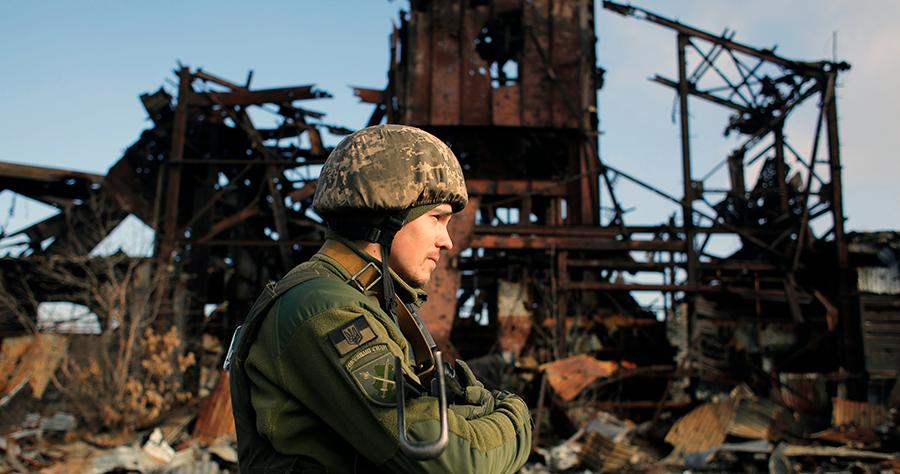 A Ukrainian soldier in a trench in the front line near the town of Novoluhanske in the Donetsk region, Ukraine, Monday, Dec. 9, 2019. (AP Photo/Vitali Komar)

As delivered by Charge d’Affaires Harry Kamian
to the Permanent Council, Vienna
March 5, 2020

Each week we witness a stark contrast in this council between Russia’s rhetoric claiming adherence to OSCE principles and the facts on the ground. Russia’s attempts to mislead do not hide the truth about the Russia-fomented conflict in eastern Ukraine, the abuses in Russia-occupied Crimea, Russia’s militarization of the Black Sea, its cyberattacks against Georgia, nor do they hide its mistreatment of peaceful religious and ethnic minorities at home and abroad, and its failure to conduct a credible investigation into the assassination of Russian politician and democracy defender Boris Nemtsov.

In truth, Mr. Chair, there is no cease-fire in Ukraine because of Russia and its proxies. Russia’s intransigence is also behind the delay in fulfilling the commitments made at the December 9 Normandy Summit in Paris.

It is time for Moscow to match the political will that has been demonstrated by President Zelenskyy’s administration in Kyiv. Anything less will prolong this made-in-Moscow conflict for which the people of Ukraine—as well as the families of Russian soldiers killed in the Donbas—have paid a bloody price.

Mr. Chair, this week the Special Monitoring Mission reported 4,100 ceasefire violations and observed combat vehicles and anti-tank mines in Russia-controlled territory of Ukraine. The SMM’s monitors faced several restrictions of movement, the vast majority, as usual, in areas controlled by Russia and its proxies. The United States urges Russia to direct the forces it arms, trains, leads, finances, and fights alongside to cease their harassment of SMM monitors. The SMM must have unhindered access across all of Ukraine, including in Crimea, to fully implement its mandate.

The SMM recently released its 2020 budget proposal, and we will now begin as a body to identify the best ways in which we can finance this key mission. Financial support to the Special Monitoring Mission is an expression of political resolve to support the peace process. We encourage all delegations to carefully consider the SMM’s budget proposal and help ensure that we provide the mission with the resources and funding it needs.

The SMM’s mandate includes Crimea, where, on a weekly basis, there is harassment, discrimination, and acts of repression against Crimean Tatars and other Ukrainian citizens. This week we mark the 6th anniversary of the abduction of Reshat Ametov, a Crimean Tatar activist who was seized by men wearing military fatigues as he stood in silent protest of Russia’s invasion of Crimea outside the Crimean Parliament building, holding a Ukrainian flag. His mutilated body was found two weeks later, with limbs bound and eyes gouged out. No one has been brought to justice for this crime or dozens of other disappearances and killings of opponents of the occupation.

We continue to follow the trial of Crimean Solidarity movement leader Server Mustafayev and seven other Crimean Solidarity activists in a military court in Rostov-on-Don. They are facing terrorism charges that carry terms between 15 years to life for their civic activism.

We call on Russia to drop these charges and release these individuals, as well as the others it has imprisoned for opposition to the occupation.

We are troubled by undue restrictions on religious freedom in Crimea. On February 26, occupation authorities requested a seven-year prison sentence for Crimean Jehovah’s Witness Serhiy Filatov, who was arrested in November 2018 on criminal “extremism” charges for peacefully practicing his faith. If imposed, this would be the longest prison term ever handed down in a Russian court to a Jehovah’s Witness for engaging in peaceful worship. On February 14, another prosecutor requested a six-and-a-half year sentence in the supposed “extremism” case against Yalta Jehovah’s Witness Artem Gerasimov, again for peaceful worship. We call on Russia to allow members of religious minorities to worship without threat of arrest and prosecution.

Mr. Chair, rather than allowing the SMM access to Crimea and addressing the international community’s human rights concerns, Moscow is focused on militarizing the peninsula and its surrounding waters.

There, and in the Donbas, the Russian government’s ongoing aggression against Ukraine undermines European security writ large.

We know the Russian people do not want their country to play the role of a destabilizing regional actor and spoiler in international affairs. We know they share the same hopes that Russia will one day regain its position as a respected member of the international community and act responsibly at home and abroad. It is time for Moscow to listen to its own people, end the bloodshed in Ukraine, and fulfill its Helsinki commitments.

The United States fully supports Ukraine’s sovereignty, independence, and territorial integrity within its internationally recognized borders, including its territorial waters. We do not, nor will we ever, recognize Russia’s purported annexation of Crimea. Crimea is not part of Russia, and the conflict in eastern Ukraine is not a civil war. Unlike Ukraine, Russia has yet to take any serious steps to resolve these crises. We join our European and other partners in affirming our Minsk-related sanctions against Russia will remain in place until Russia fully implements its Minsk commitments. Crimea-related sanctions will remain in place until Russia returns full control of the peninsula to Ukraine.