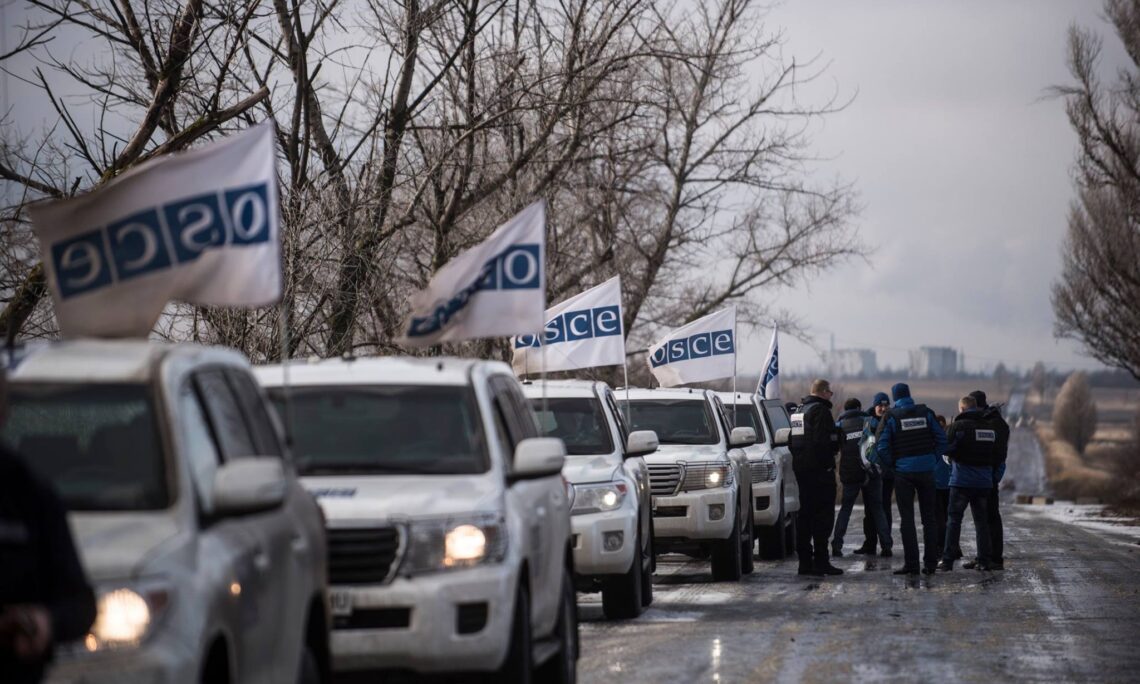 We call on Russia and the forces it leads to immediately cease preventing the other SMM monitors. (Photo:OSCE SMM)

We welcome news that a handful of monitors were able to leave the Park Inn Hotel today.  We call on Russia and the forces it leads to immediately cease preventing the other SMM monitors, including several U.S. citizens, from leaving their hotels in Russia-controlled territory.  This is a blatant contravention of the SMM’s mandate and unjust detention of persons doing their jobs under a mandate approved and renewed yearly by this Permanent Council.

Russia-led forces appear to believe that they can operate against the SMM without regard to any restrictions at all.  They are mistaken.  The SMM’s mandate affords monitors the ability to travel throughout Ukraine’s internationally recognized borders, which includes those areas of Donetsk and Luhansk oblasts currently under Russia’s control.

We call on Russia to end these manufactured demonstrations and allow the SMM monitors to return to their work monitoring the Russia-led conflict in eastern Ukraine.   We also urge Russia to rejoin the JCCC, which would greatly help the current situation, and to instruct the forces it leads to cease impersonating JCCC personnel, including the wearing of JCCC insignia.

We deeply regret Russia-led forces’ closure of the entry-exit crossing point (EECP) at Stanytsia Luhanska, which was the only EECP in full operation.  This imposition by Russia of yet another barrier to keep the people of Ukraine divided from each other will cause additional hardships for eastern Ukraine’s most vulnerable civilians.  We call on Russia and the forces it leads to reopen the five entry-exit crossing points that were functioning prior to the pandemic, as well as those at Shchastiya and Zolote.  Not only would this demonstrate Russia’s political will to abide by its commitments under the Minsk agreements, reopening the crossing points would have a profound positive impact on the lives of civilians who seek to move freely in their own country, Ukraine.

Landmines and unexploded mortars will present a threat to civilians for years to come.  Even so, casualties from indirect and direct fire would cease immediately if ever Russia were to decide to halt its campaign of violence and start to seriously negotiate within the Trilateral Contact Group and the Normandy Format.  This year alone, the SMM has confirmed 73 civilian casualties, 15 of which were fatalities.  This ongoing carnage needs to stop and it is entirely within Russia’s power to do so.

The SMM can monitor this conflict, but it cannot end it — only Russia can do that.  We call on Russia to cease impeding the SMM and allow it to fulfill the Mission’s mandate and monitor throughout Ukraine, which includes Crimea.  We call on Russia to stop interfering with SMM patrols, UAV flights, and cameras, and permit the monitors to move unrestricted within Russia-controlled territory in Donetsk and Luhansk oblasts, across the Line of Contact, and across the so-called inter-oblast boundary line.   Ukraine Armed Forces facilitate SMM monitoring, rather than obstruct it as Russia-led forces routinely do.

Russia continues to block progress on security measures within the Trilateral Contact Group.  Why won’t Russia show it cares for the people living in the territory it controls and implement once again the additional measures to strengthen the ceasefire, which saved lives and cost Russia nothing?  The back-and-forth negotiations on political matters will go on for some time.  In the meantime, must soldiers on both sides and civilians just trying to live their lives continue to be killed, maimed, and prevented from moving freely in their own country?

We continue to receive reports of serious abuses in Russia-occupied Crimea.  Russia’s occupation authorities transferred imprisoned Deputy Head of the Crimean Tatar Mejlis Nariman Dzhelyal to a psychiatric facility for evaluation without any apparent legitimate basis.   We condemn Russia’s use of punitive psychiatry in Crimea to pressure opponents of the occupation and falsely equate peaceful dissent with mental illness.  Human rights defenders have documented at least 49 such cases in Crimea since the occupation began.  We again call for Russia to release Dzhelyal and all other political prisoners.  We are troubled by the reports that at least 15 Crimean Tatars were detained on October 11 for merely standing outside a Simferopol court to show their support for political prisoners standing trial inside.  When five other Crimean Tatars sought to confirm the whereabouts of those detained at a local police station, they too were detained.

As I reiterate weekly, the United States supports Ukraine’s sovereignty, independence, and territorial integrity within its internationally recognized borders.  We do not, nor will we ever, recognize Russia’s purported annexation of Crimea.  We are also concerned about the Russian Federation’s plan to conduct, without Ukraine’s permission, an all-Russian population census between October 15 and November 14 in occupied Crimea.  The census is another manifestation of Russia’s campaign to undermine Ukraine’s sovereignty.  As a signatory to the joint declaration of the Crimea Platform, we reaffirm that Crimea is Ukraine.  Crimea-related sanctions will remain in place until Russia returns full control of the peninsula to Ukraine.