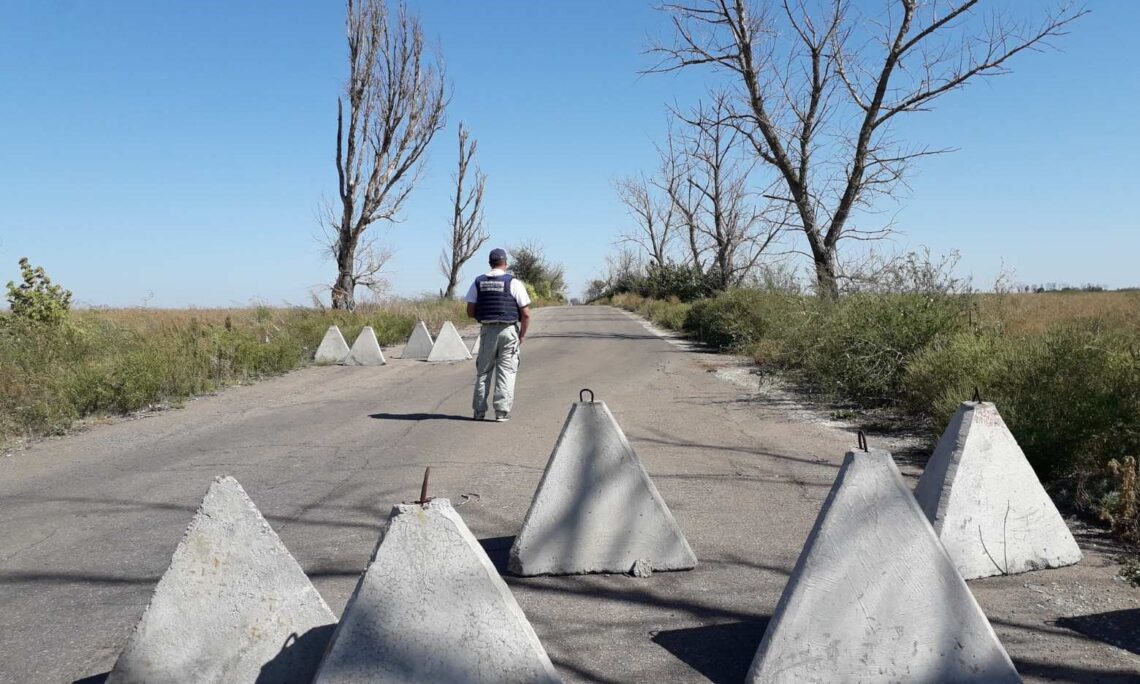 If Russia has a dispute with Ukraine, it should be resolved diplomatically.  The multinational SMM is not a bargaining chip. (Photo OSCE SMM)

We are relieved protests outside the SMM monitors’ hotel in Donetsk city have ceased and patrolling has resumed.  The international community depends on the reports of SMM monitors, but their safety is paramount.  If Russia has a dispute with Ukraine, it should be resolved diplomatically.  The multinational SMM is not a bargaining chip.  This latest incident is a perfect illustration of why Russia should return to the Joint Control and Coordination Commission, or JCCC (Jay triple-C).  Such a move would be an important step towards implementation of a durable ceasefire.

Notwithstanding the conclusion of the protests, we call on Russia to allow the SMM to fulfill its mandate and monitor throughout Ukraine, which includes the Russia-controlled parts of the Donbas and Russia-occupied Crimea.  Russia must stop obstructing SMM patrols, jamming UAV flights, and tampering with SMM cameras.  Unrestricted SMM movements within Russia-controlled territory in Donetsk and Luhansk oblasts, across the Line of Contact and across the so-called inter-oblast boundary line should be the norm, not the exception.

We urge Russia to reopen all entry-exit crossing points (EECP) along the Line of Contact to allow free movement of civilians.  Civilians must be able to cross between Russia-controlled and government-controlled territory to retrieve pension payments, seek medical treatment, purchase medicine, and visit with their families.  In September 2019, there were 1.2 million crossings at five EECPs.  In September 2021, there were just 67,000 crossings at Stanystia Luhanska and 3,000 crossings at Novotroytske, per UNHCR reporting.  Should crossing numbers at Stanytsia Luhanska become similar to those at Novotroytske, future crossings would be just one half of one percent of pre-pandemic numbers.  This is unacceptable and it does nothing except compound the hardship Russia, and the forces it leads, imposes on civilians residing in Donetsk and Luhansk oblasts, who continue to endure the impact of the pandemic.  It is high time Russia reversed course and returned all EECPs to pre-pandemic levels of operation.

Meanwhile, Russia still blocks progress on security measures within the Trilateral Contact Group.  Russia clearly demonstrates its disregard for the people living in territory it controls when it refuses to implement once again the additional measures to strengthen the ceasefire; these actions saved lives and cost Russia nothing.  The back-and-forth negotiations on political matters will go on for some time.  In the meantime, must civilians just trying to live their lives continue to be killed, maimed, and prevented from moving freely in their own country?   This year alone, the SMM has confirmed 79 civilian casualties, 15 of which were fatalities.  This continuing carnage needs to stop, and it is entirely within Russia’s power to do so.

We continue to receive reports of serious abuses in Russia-occupied Crimea.  Deputy Head of the Crimean Tatar Mejlis Nariman Dzhelyal remains detained in a psychiatric facility, which is a blatant use of punitive psychiatry and falsely equates peaceful dissent with mental illness.  We are deeply troubled by the news that a court in Sevastopol sentenced Jehovah’s Witness Igor Schmidt to six-years in prison for criminal extremism in retaliation for his peaceful religious practice.  He is the fourth Crimean Jehovah’s Witness to receive a prison sentence of at least six years.