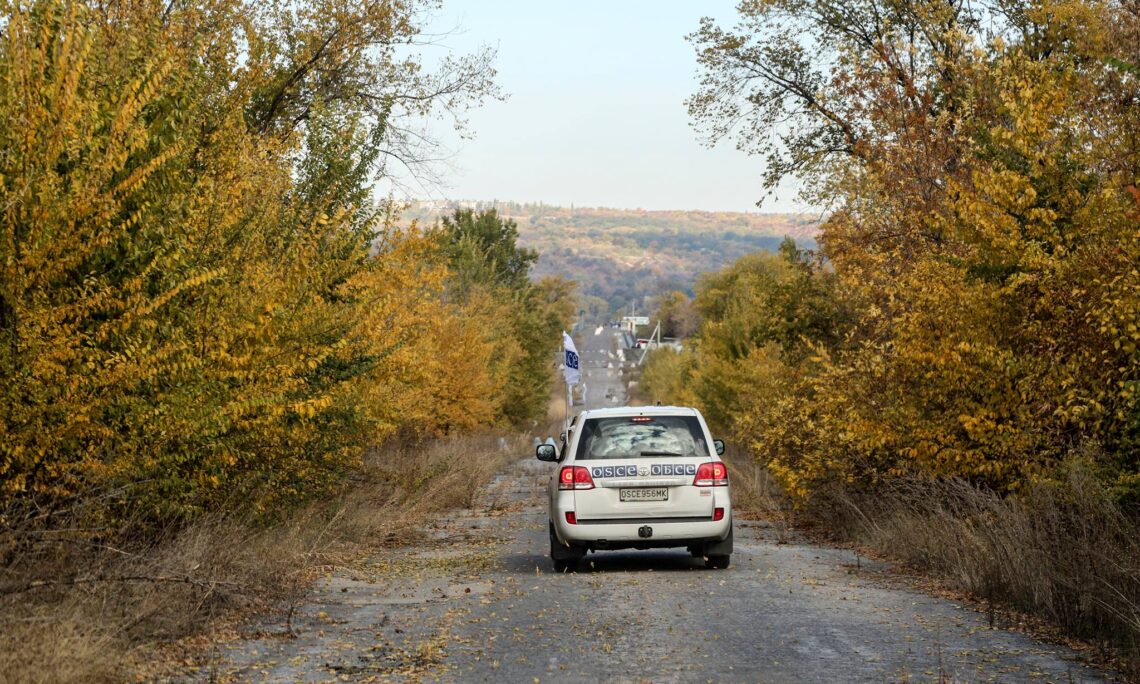 We call on Russia to allow the SMM to fulfill its mandate and monitor throughout Ukraine (Photo: OSCE SMM)

to the Permanent Council, Vienna
November 11, 2021

Russia’s military activity in and around Ukraine, along with the Kremlin’s increasingly hostile rhetoric over the preceding months, is unwarranted and dangerously provocative.  The primary obstacle to peace is Russia.  This is a conflict Russia started, and now bears full responsibility for ending.

Russia’s aggression in Ukraine, now in its eighth year, has caused more than 13,000 deaths, tens of thousands of injuries, displaced 1.6 million people, and inflicted countless instances of damage to critical civilian infrastructure.  We call on Russia to cease its aggression, observe the ceasefire, implement its Minsk commitments, and withdraw its forces from Ukraine’s sovereign territory.

We also call on Russia to allow the SMM to fulfill its mandate and monitor throughout Ukraine, which includes the Russia-controlled territory in the Donbas and Russia-occupied Crimea.  For the SMM to fulfill its mandate, Russia must stop obstructing SMM patrols, jamming UAV flights, and tampering with SMM cameras.  Russia also must cease restricting SMM movements within Russia-controlled territory in Donetsk and Luhansk oblasts, across the Line of Contact and across the so-called inter-oblast boundary line.

I would like to underscore the consistent and critical impartiality of the SMM’s reporting.  This impartiality makes the SMM’s reporting dependable.  That dependability allows all participating States an accurate view of the situation on the ground.  As my esteemed Turkish colleague said a few moments ago, the facts matter.  The United States is and will remain wholly committed to defending the SMM’s impartiality and insist on its right to fulfill its mandate within Ukraine’s internationally recognized borders.

The United States stresses its deep concern over the increasing number of ceasefire violations near the Line of Contact, particularly within and near the Disengagement Areas at Zolote and Petrivske.  The establishment of these disengagement areas nearly two years ago represented admirable levels of political will by both Russia and Ukraine, and it would send an important signal to the international community that Russia is committed to finding a diplomatic solution to the conflict should it once more demonstrate that will, disengage from these areas, and stop committing ceasefire violations.

We urge Russia to engage constructively within the Trilateral Contact Group and to reopen all EECPs along the Line of Contact to allow free movement of civilians.  It is worth noting that shelling has damaged infrastructure at the entry-exit crossing point (EECP) at Zolote.  Civilians should be able to cross back and forth between Russia- and government-controlled territory to retrieve pension payments, seek medical treatment, purchase medicine and visit with family members.  We call on Russia to reverse course and return all EECPs to pre-pandemic levels of operation.

We continue to receive reports of serious abuses in Russia-occupied Crimea.  Deputy Head of the Crimean Tatar Mejlis Nariman Dzhelyal remains detained, and recently new charges were added to the case against him.  We are deeply troubled by the accelerating trend of mass detentions of Crimean Tatars seeking to peacefully protest in opposition to Russia’s repression.  There have been four such mass detentions in less than a month.  On October 29, police in Russia-occupied Simferopol detained over two dozen Crimean Tatars standing outside a courthouse in solidarity with three political prisoners whose appeal hearing was going on inside.  Two days later, Simferopol police detained 19 Crimean Tatars, including the wives of several political prisoners, who were also standing outside a courthouse in solidarity with yet another group of political prisoners during their appeal hearing.  We are also concerned about the health of Ukrainian prisoner Ivan Yatskin.  According to his lawyer, since his detention in October 2019, Yatskin has been repeatedly denied medical treatment for a serious circulatory condition and now is at risk of having his legs amputated.  We continue to monitor these developments and call on Russia to end its politically motivated repression of those who peacefully oppose its occupation and of members of religious and ethnic minority groups.