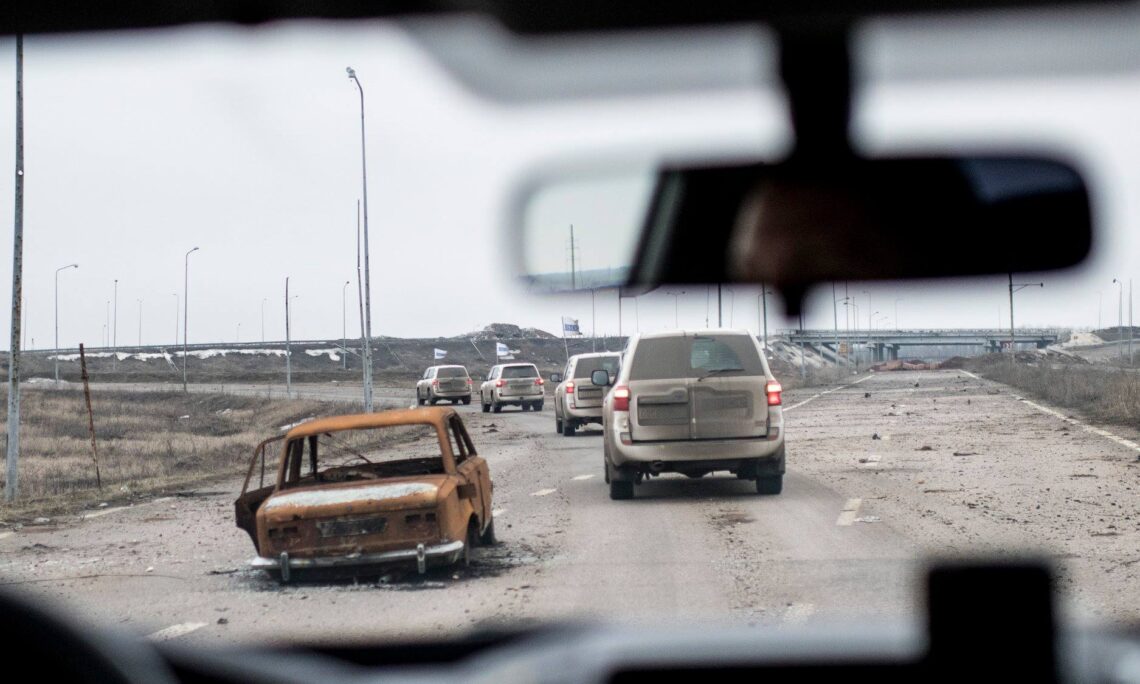 OSCE SMM patrols going out every day all across Ukraine. (Photo: OSCE SMM)

to the Permanent Council, Vienna
November 18, 2021

We remain deeply concerned by reports of unusual Russian military activity near Ukraine.  We are monitoring the region very closely, as we always do, and we will continue to consult closely with Allies and partners on this issue.  As we have made clear, any escalatory or aggressive actions would be of great concern to the United States.  We continue to support de-escalation in the region, a recommitment to the July 2020 additional measures to strengthen the ceasefire, and a diplomatic resolution to the conflict in eastern Ukraine.

We do not have clarity into Moscow’s current intentions, but we all know what Russia did in 2014 — it used force to violate Ukraine’s sovereign territory, seizing Crimea and initiating the bloody conflict in eastern Ukraine, falsely claiming its unilateral aggression was provoked.   We are all familiar with Russia’s playbook, with its fabrications that attempt to justify the unjustifiable.  The recent escalation in hostile rhetoric from the Kremlin against Ukraine, including baseless claims that Ukraine’s purely defensive actions on its own Ukrainian territory are provocations, has not gone unnoticed.  As Secretary Blinken said last week in Washington, the United States’ commitment to Ukraine’s independence, sovereignty, and territorial integrity is ironclad.  Should Russia commit further aggressive acts against Ukraine or attempt to use energy as a weapon we are resolved to take appropriate action in coordination with Allies and partners.

Also concerning was Russian President Putin’s recent Decree, which further integrates the economy of Russia-controlled territory in Ukraine into Russia itself.  This most-recent violation of Ukraine’s territorial integrity builds on past efforts by Russia, most notably its passportization campaign, which will have negative implications for years to come across the OSCE region.

We commend our Ukrainian colleagues and partners for the remarkable restraint that they continue to demonstrate.  If there are any provocations, they are coming from Russia with these movements of forces that we are tracking along Ukraine’s borders.  The international community will see through any effort by Russia to reprise its previous tactics.

Russia’s aggression in Ukraine, now in its eighth year, has caused more than 13,000 deaths, tens of thousands of injuries, displaced 1.6 million people, and done devastating damage to critical civilian infrastructure.  We call on Russia to cease its aggression, observe the ceasefire, implement its Minsk commitments, and withdraw its forces from Ukraine’s sovereign territory.

We call on Russia to cease obstructing the SMM’s efforts to observe and report, as mandated, on developments throughout Ukraine, which includes Russia-controlled territory in the Donbas and Russia-occupied Crimea.  We urge Russia to engage constructively within the Trilateral Contact Group and to reopen all EECPs along the Line of Contact to allow free movement of civilians.

We continue to receive reports of serious abuses in Russia-occupied Crimea.  Deputy Head of the Crimean Tatar Mejlis Nariman Dzhelyal and Radio Liberty journalist Vladislav Yesypenko remain unjustly detained.  We call for the release of all Ukrainian political prisoners Russia holds and for Russia to cease using its judicial system to punish freedom of expression.  We note that on November 11 a Simferopol court sentenced independent defense lawyer Edem Smedlayev to 12 days in prison for refusing to submit to a strip search at a Simferopol detention center.  Smedlayev was seeking access to clients who were amongst those subjected to mass detention on October 25.  He had pointed out procedural violations during the questioning of his clients.  In response, police demanded that he strip so that they could check him for “extremist tattoos.”  We call on Russia to end its campaign of harassment and intimidation of independent defense lawyers and others who seek to stand up for human rights in Crimea.

As we reiterate weekly, the United States supports Ukraine’s sovereignty, independence, and territorial integrity within its internationally recognized borders.   We do not, nor will we ever, recognize Russia’s purported annexation of Crimea.  Crimea-related sanctions will remain in place until Russia returns full control of the peninsula to Ukraine.