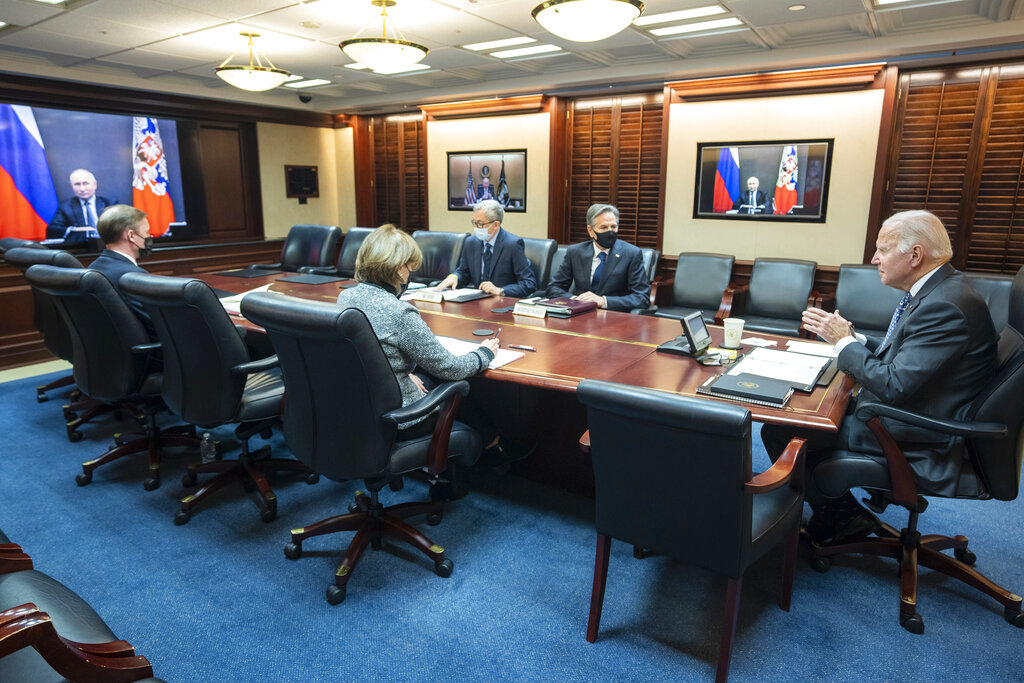 I congratulate the Chair on last week’s successful Ministerial Council, during which Russia’s aggression against Ukraine featured prominently.  Allow me to once again reiterate the U.S. position on this current issue:

The United States remains steadfastly committed to Ukraine’s independence, sovereignty, and territorial integrity.  During his meeting with Russian President Putin yesterday, President Biden voiced the deep concerns of the United States and our European Allies about Russia’s escalation of forces surrounding Ukraine and made clear that the U.S. and our Allies would respond with strong economic and other measures in the event of military escalation. President Biden reiterated his support for Ukraine’s sovereignty and territorial integrity and called for de-escalation and a return to diplomacy.

Russia’s ongoing aggression against Ukraine, with its military build-up on Ukraine’s border, is the greatest security threat facing Europe today.  By violating its neighbor’s sovereignty and undermining its territorial integrity, Russia aims to prevent Ukraine from its freely chosen path of full Euro-Atlantic integration.  As Secretary of State Blinken said at the Ministerial, the United States calls on Russia to deescalate, reverse its aggressive troop movements, end its occupation of Crimea, and meaningfully engage on implementing a diplomatic solution to the conflict in eastern Ukraine.

We remain deeply concerned by evidence Russia has made plans for significant escalation against Ukraine, including a large-scale military operation and efforts to destabilize Ukraine from within.  We are, as always, monitoring the region very closely and we will continue to consult closely with Allies and partners on this issue.  As we have made clear, we will impose severe costs and consequences on Russia if it takes further aggressive action.  We likewise call on Russia to cease its attempted integration of Ukrainian citizens and Ukrainian territory it controls through passportization, economic alignment, and changes to the education system.

Russia’s aggression in Ukraine, now in its eighth year, has caused more than 13,000 deaths and tens of thousands of injuries, has displaced 1.6 million people, and has wrought devastating damage to critical civilian infrastructure.

The United States was pleased to co-sponsor a statement to the OSCE Ministerial Council expressing support for the SMM and calling for enhanced monitoring near the Russia-Ukraine border.  There were 37 other co-sponsors.  Russia was not one of them, and Russia’s delegation refused to engage on the draft statement from the outset.  I encourage Russia to reconsider its approach, return to the negotiating table and work towards meaningful security cooperation.

We call on Russia to cease obstructing the SMM’s efforts to observe and report, as mandated, on developments throughout Ukraine.  We urge Russia to engage constructively within the Trilateral Contact Group, return to the JCCC, and to open all civilian crossing points along the Line of Contact to allow free movement of civilians.  The urgency of the humanitarian crisis caused by Russia’s proxies’ closure of the EECPs was evident at the side event on Freedom of Movement organized by the Chair.  Russia could alleviate civilian suffering in an instant, and we call on its government to do so.

The United States was proud to co-sponsor Ukraine’s side event at the OSCE Ministerial titled “Crimea Platform: The Way Forward.”  We congratulate Ukraine on its efforts to reinvigorate international attention on Russia’s occupation of Crimea through its ongoing work on the Crimea Platform initiative.  Beginning with the Crimea Platform Summit in August, and bolstered by the recent side event, international attention on Crimea has never been greater.  In the months ahead, the United States looks forward to participation with international partners in the Platform’s working groups to identify ways we can coordinate efforts to restore control of Crimea to Ukraine, maintain a spotlight on the abuses Russia commits in Crimea, and address the international security risks posed by Russia’s militarization of the peninsula.

As we reiterate weekly, we call for the release of all Ukrainian political prisoners held by Russia, including Radio Liberty journalist Vladislav Yesypenko and Crimean Tatar Deputy Mejlis head Nariman Dzhelyal, whose unjust pre-trial detention on baseless charges was extended last week until January 23.

We do not, nor will we ever, recognize Russia’s purported annexation of Crimea.  Crimea-related sanctions will remain in place until Russia returns full control of the peninsula to Ukraine.