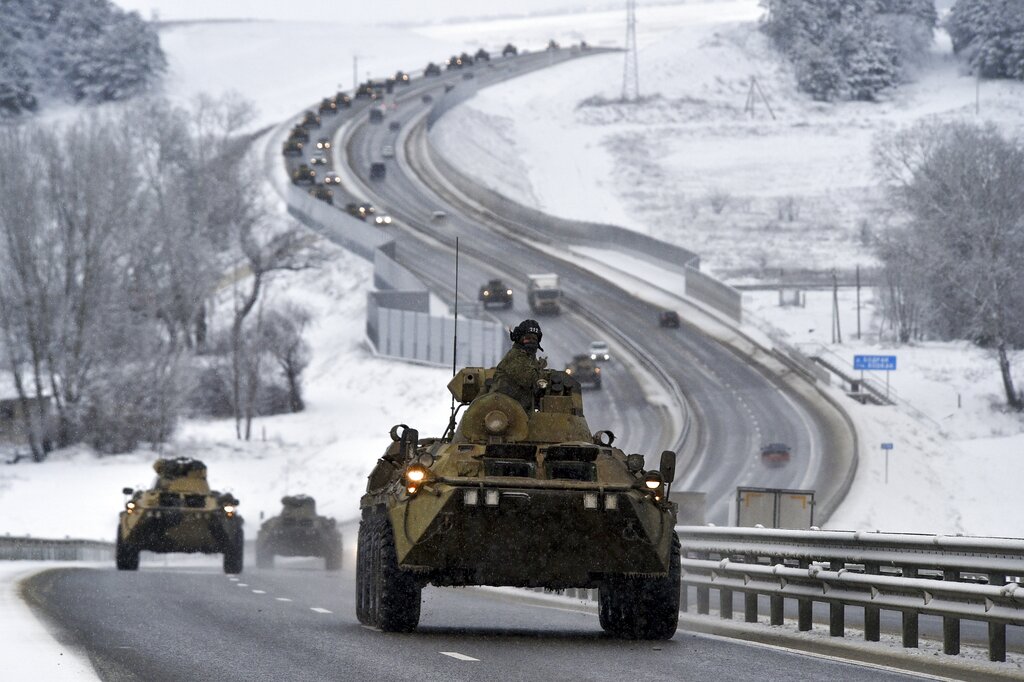 Russia has concentrated an estimated 100,000 troops with tanks and other heavy weapons near Ukraine. (AP Photo, File)

by Russia in Ukraine

Russia is continuing to escalate its threatening posture toward Ukraine with a continuation of its massive and unprovoked build-up of Russian forces on Ukraine’s borders, including in Belarus.  These heavily armed combat forces include tanks, artillery, air-defense systems, and ballistic missiles.  This military escalation is accompanied by demands from Moscow implying that Ukraine does not deserve to have a voice in its own security arrangements.  Instead, Moscow is trying to dictate the membership of NATO, a defensive alliance.  It is worth asking why.  One might also ask why so many of Russia’s neighbors are interested in applying for membership in a defensive alliance.

Colleagues, we must not and cannot undo the decades of progress we have made in institutionalizing the fundamental principles of the rules-based international order as reflected in the UN Charter, Helsinki Final Act and subsequent OSCE documents, including the 1990 Charter of Paris and the 1999 Charter for European Security, as well as the 2010 Astana Summit Commemorative Declaration.  This crisis is much bigger than Ukraine.  This is about the type of world we want to live in.  One in which the tanks and missiles of a powerful neighbor can decide a country’s fate or one in which citizens freely choose their own country’s future for themselves.

The United States will never hesitate to defend OSCE principles and commitments in this Council.  That said, we remain committed to a diplomatic way-forward, should Russia choose to de-escalate the current crisis and lower tensions.  Yesterday in Moscow, we shared our concerns and ideas in more detail and in writing with the Russian government, and we are prepared for further discussions.  The document we delivered includes concerns of the United States and our Allies and partners about Russia’s actions that undermine security, a principled and pragmatic evaluation of the concerns that Russia has raised, and our own proposals for areas where we may be able to find common ground.  We made clear that there are core principles that we are committed to uphold and defend, including Ukraine’s sovereignty and territorial integrity and the right of States to choose their own security arrangements and alliances.

During many times in the past, Russia and the United States have sat down with our partners to iron out agreements to increase transparency, reduce the risk of military conflict, advance arms control agreements, and build trust.  I don’t need to remind anyone around this table of this fact because much of this work was done right here at the OSCE.  This is why we enthusiastically support the Chair’s call for a revitalized dialogue on European security.  We are ready to roll up our sleeves and get to work.  So, we say now to our Russian colleagues: let us find a way to de-escalate, to discuss how we can enhance transparency, and to talk about the peaceful resolution of conflicts.  Let’s talk about concrete ways to promote peace and build trust. The choice is yours – we are ready either way.

Finally, I must again emphasize that we do not, nor will we ever, recognize Russia’s purported annexation of Crimea.  Nor will we cease raising our concerns about Russia’s humanitarian abuses in Crimea or end our calls for the release of all of the more than 100 Ukrainian political prisoners Russia holds, including Crimean Radio Liberty journalist Vladislav Yesypenko and Deputy Head of the Crimean Tatar Mejlis Nariman Dzhelyal.