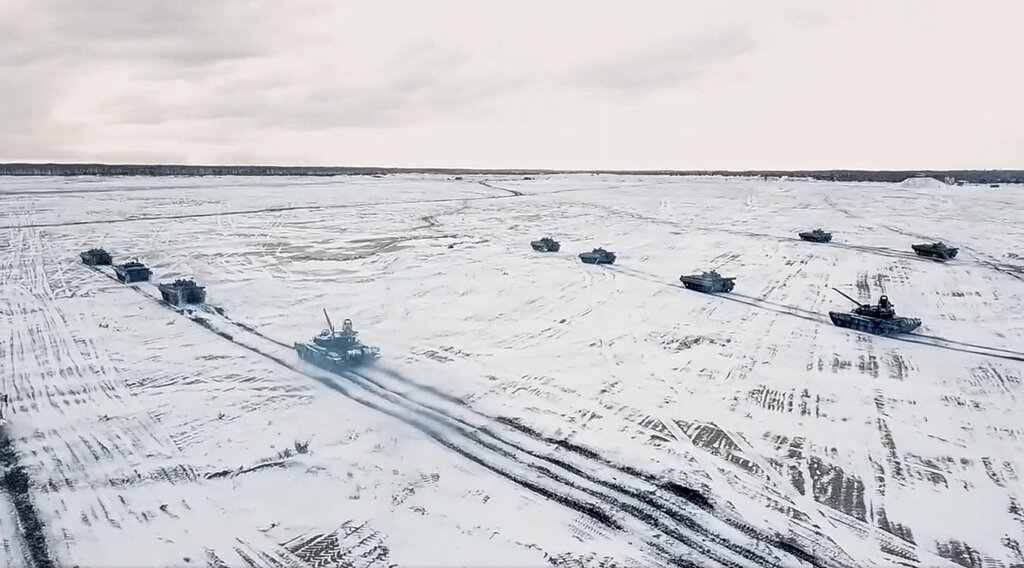 to the Permanent Council, Vienna
February 3, 2022

Russia continues to threaten the security of not just Ukraine, but Europe as a whole, with its ongoing military escalation, unannounced military exercises, increasingly hostile rhetoric, and false narrative that Ukraine is planning some unspecified provocation with the help of security assistance from NATO member countries.  This is demonstrably false.

What is demonstrably true is Russia has arrayed more than 100,000 troops along the Russia-Ukraine border, in Crimea, and in Belarus – where Russia has relocated Su-35 fighter planes, along with S-400 air-defense systems, munitions and medical support.  Russia has also moved nearly 5,000 troops to Belarus, with short-range ballistic missiles, special forces, and anti-aircraft batteries.  We’ve also seen evidence that Russia intends to expand that presence to more than 30,000 troops near the Belarus-Ukraine border, less than two hours north of Kyiv, by early February.  All told, there are more than 100,000 Russian troops near Ukraine’s borders, supported by scores of aircraft, an unprecedented amount of ammunition for a supposed “exercise,” and standby medical supplies such as blood banks.  Indeed — everything necessary for one country to attack another.

Let us also look at the actions of the Ukrainian government and the Ukrainian Armed Forces. Open-source satellite imagery shows no sign of a Ukrainian troop build-up.  In the areas Ukrainian Armed Forces control, they allow SMM monitors to move freely, and the SMM has not reported any significant change in government-controlled territory, including the Ukrainian side of the Line of Contact, regarding Ukrainian troop or equipment movements.  That contrasts with the non-government controlled area, where Russia-led forces routinely restrict monitor movements, deliberately reducing their ability to observe and report on developments.

It is also true Russia-led forces in Ukraine continue to prevent Ukrainian civilians from traveling freely in their own country.  I underscore these civilians are Ukrainian citizens, regardless of their ethnicity, language, religion, or political view.  Russia’s passportization campaign does not negate the fact that these people are citizens of Ukraine.

We urge Russia to choose the path of diplomacy and de-escalation.  Russia outlined its concerns and proposals in writing, and the United States has also delivered a response to Moscow in writing.  We made clear that there are foundational principles that we are committed to uphold and defend – including Ukraine’s sovereignty and territorial integrity.  But there is plenty for us to talk about.  If Russia sees value in risk reduction, confidence building, and military transparency, then we should talk. If Russia sees value in the ten foundational Helsinki Final Act principles, then we should definitely talk, because we have serious concerns about Russia’s behavior.

The OSCE is a forum where these discussions should take place, as the Chair has called for. We believe we should start this dialogue without delay, and we are ready to join the first meetings as soon as possible.

Since the signing of the Helsinki Final Act, almost 50 years ago, no other participating State has ever violated Russia’s borders.  In fact, Ukraine gave up its nuclear weapons in accordance with the Budapest Memorandum so as not to threaten its neighbors’ security.  I think we can all agree the idea that no state should violate the territorial integrity, borders, and sovereignty of other participating States.  That is exactly what Russia has done in Ukraine, Georgia, and Moldova — it has forcibly seized territory belonging to Ukraine and Georgia, and continues to station forces in Moldova without Moldova’s consent.  And now we are witnessing Russia’s massive buildup of forces near and in eastern Ukraine and in occupied Crimea and nearby waters.

While we are always prepared to pursue diplomacy, some things remain non-negotiable.  The United States does not, nor will we ever, recognize Russia’s purported annexation of Crimea.  We will not dilute our commitments to sovereignty, territorial integrity, and the inviolability of borders.  Nor will we cease raising our concerns about Russia’s abuses in Crimea or end our calls for Russia to release all the Ukrainian political prisoners it currently holds.  I remind this Permanent Council that Ukraine has an inherent right to self-defense, as reflected in Article 51 of the UN Charter, which the United States will continue steadfastly to support.