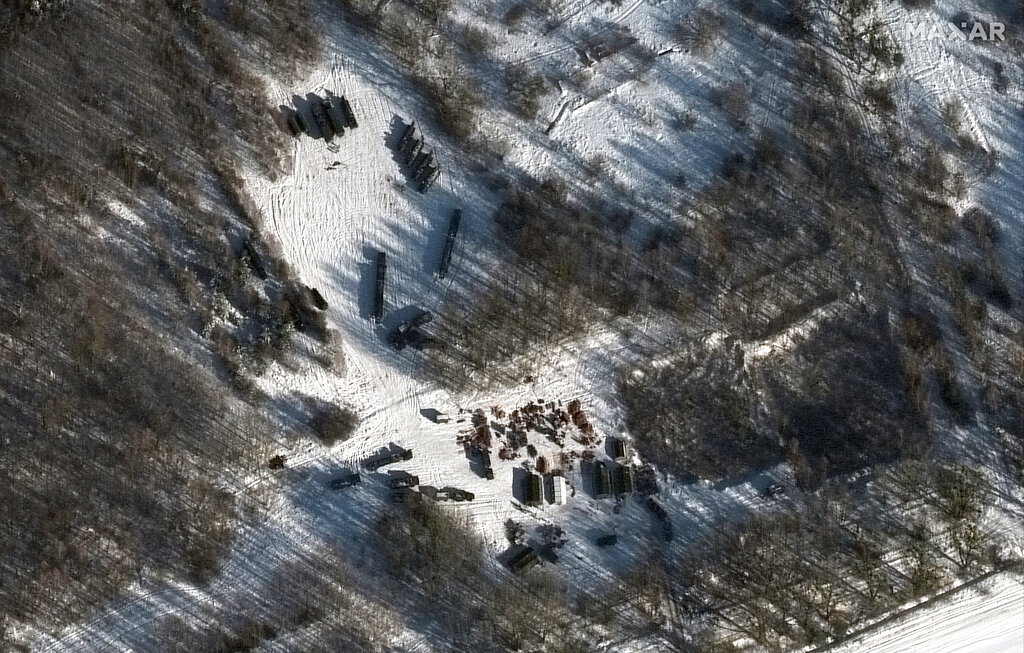 The Russian troop deployment to Belarus raised concerns in the West that Moscow could stage an attack on Ukraine from the north. (Satellite image ©2022 Maxar Technologies via AP)

to the Permanent Council, Vienna
February 10, 2022

Our serious concerns about the large number of Russian troops massed in and around Ukraine have not abated.  Just the opposite.  Russia’s denial that it has any aggressive intentions related to this unrelenting buildup continues to defy the reality we see on the ground.

Russia has mobilized 85 heavily armed Battalion Tactical Groups in an unprecedented and unprovoked build-up on Ukraine’s borders.  Russia’s forces are also now positioned along the Belarus-Ukraine border, less than two hours north of Kyiv, with plans for more than 30,000 troops to be staged for a potential offensive into Ukraine, along with, as my UK colleague has noted, short-range ballistic missiles, anti-aircraft batteries, attack helicopters, fighter planes, and S-400 air defense systems.  We see Russia escalating its brinksmanship by conducting provocative exercises along Ukraine’s borders and in occupied Crimea, as well as in the Black Sea and the Sea of Azov, as was mentioned by several of the preceding speakers.  This chokes off commercial traffic in both bodies of water.

In this context, I want to applaud the Ukrainian government and the Ukrainian Armed Forces for continuing to show tremendous restraint in the face of these provocations. Like my Canadian colleague, I would also like to spend a few minutes talking about the human costs of this conflict. And, as she did, why not? Let’s talk about it in the context of indivisibility of security.

Already, Russia’s war in eastern Ukraine has killed more than 14,000 people.  Approximately 1.6 million civilians have been displaced by the conflict that Russia fomented and continues to fuel. Civilians who remain in Russia-controlled parts of eastern Ukraine are presided over by lawless Russia-backed warlords who rule by fear and subject them to human rights abuses on a regular basis.  Meanwhile, Russian authorities in Crimea relentlessly target for repression those who peacefully oppose the occupation.  Nearly 3 million Ukrainian civilians – half of whom are elderly people and children – are in need of food, shelter, and lifesaving assistance as a direct result of Russia’s ongoing aggressive actions.  Russia-led forces in Ukraine continue to prevent Ukrainian citizens from traveling freely in their own country.  As a result of this repression, elderly civilians in the non-government-controlled areas of eastern Ukraine can’t get their pensions, the sick can’t get their medicine, and families can’t visit loved ones.  Let me remind this Council that under the Minsk agreements, Russia committed to ensure humanitarian access to those in need, as well as access for SMM monitors.  Those commitments are routinely ignored, even as Russia claims that the Minsk agreements must be fulfilled.  This is the height of hypocrisy.

As devastating as this situation is, it pales in comparison to the humanitarian impact a further Russian invasion of Ukraine would cause.

Colleagues, we’ve consistently spoken of the two paths Russia can choose: dialogue and diplomacy or escalation and massive consequences.  As President Biden reaffirmed again this week, we remain committed in good faith to the first path – dialogue and diplomacy.  We have made clear that this path provides the only durable and responsible solution to the security concerns of the United States, our Allies and partners, and indeed Russia itself.  Over the past several weeks, the United States has made genuine and sincere efforts to pursue dialogue and diplomacy, including here at OSCE, with the launch of the Renewed European Security Dialogue.  But genuine progress can only be made in an environment of de-escalation.  Now is the time for Russia to halt and reverse its build-up of troops along Ukraine’s borders, fulfill its longstanding commitments here at the OSCE, and engage actively and constructively in the Polish Chairman-in-Office’s proposal for Renewed European Security Dialogue. It’s intentions will be clear soon.