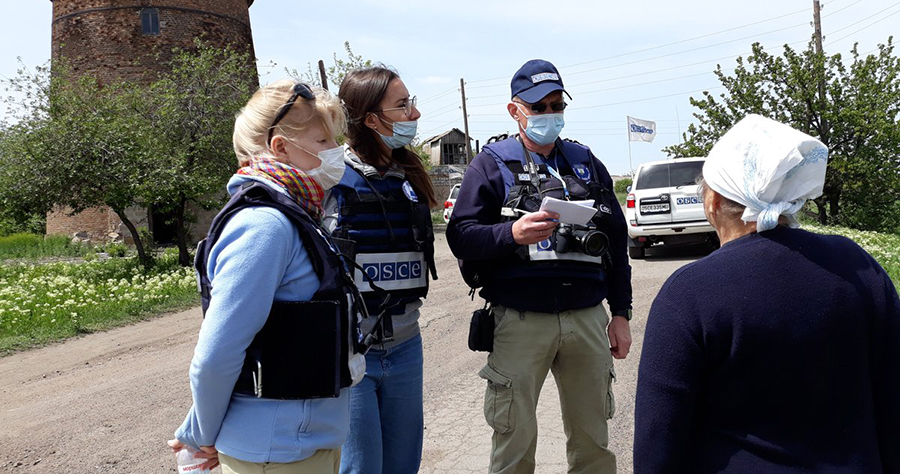 Last week in eastern Ukraine, Russia-led forces attacked Ukrainian Armed Forces near Zaitseve, killing two servicemembers, including an unarmed medic, and seriously wounding two others.  A third Ukrainian servicemember was killed at Slavene.  My deepest condolences to the families and friends of these latest losses.  Russia’s ongoing aggression continues to add to a grim death toll.

Every single casualty, both military and civilian, is a direct consequence of Moscow’s efforts to destabilize its sovereign neighbor and to obstruct Ukraine on its chosen path of full integration with a democratic Europe.  Russia’s manufactured conflict poses the most serious threat to security in the OSCE region since the 1990s.

Since the last reaffirmation of the recommitment to the ceasefire on December 18, daily ceasefire violations in eastern Ukraine have continued, causing numerous deaths and injuries, including to civilians.

Like others, we are hopeful that Ambassador Grau’s announcement today that Trilateral Contact Group negotiations resulted in an agreement on additional measures to strengthen the ceasefire will in fact bring about a full and comprehensive implementation of a ceasefire called for in the Minsk Agreements, and which the Normandy Format leaders also committed to implementing during their last summit.  Perhaps this is the moment, finally, when there will be a turning point for the better.

We are hopeful the reality on the ground will fully reflect a ceasefire starting on July 27, and going forward, there will be compliance with a ceasefire until a full and comprehensive settlement of the Russia-created conflict in eastern Ukraine.  We hope these developments will bring respite to civilian communities affected by the violence that has disrupted their lives for more than six years.

At the same time, Russia-led forces continue to impede the activities of the Special Monitoring Mission.  We were pleased to see that Russia-led forces and proxy authorities ceased obstructing the transfer of 42 SMM monitors to a patrol hub in Donetsk oblast. Once again, maybe we’ve reached a point where there is a turning point.  However, so-called Luhansk People’s Republic authorities failed to follow suit and also refused to allow SMM monitors, as well as shipments of humanitarian cargo, to cross the so-called administrative boundary into Luhansk.  A number of SMM monitors have been working, without a break, for months now in Russia-held territory.  We call upon Russia to direct the forces it arms, trains, finances, leads and fights alongside in eastern Ukraine to cease their harassment of the SMM, and allow the Mission to refresh its staffing in Russia-controlled territory. This can only lead to a more peaceful situation and perhaps that inch of change for which we all hope.

We remain concerned over Moscow’s militarization of Crimea, to include its provocations in the Black Sea and the Sea of Azov.  Since 2014, Russia has forcibly conscripted nearly 24,000 young Crimeans into the Russian Armed Forces, which is a violation of international law.

Occupation authorities use harassment, detention, arrest, and worse against Crimean Tatars, ethnic Ukrainians, and others who oppose the occupation.  Russia currently holds more than 80 Ukrainian citizens as political prisoners, many jailed on “terrorism” or “extremism” pretexts

We are closely following several ongoing “terrorism” cases against Crimean Tatars, including the trial that began on July 20 against against Arsen Abkhairov, Eskender Abdulganiev, and Rustem Emiruseinov.  As in most of these cases, authorities are not even asserting that these individuals planned or carried out an act of violence.  They are simply alleged to be members of a pan-Islamic organization that is legal in Ukraine.  Credible human rights organizations have alleged that these men were charged after being subjected to arbitrary surveillance targeting individuals voicing opposition to the occupation.

Today marks 80 years since the United States’ acting Secretary of State Sumner Welles issued the Declaration condemning the illegal Soviet occupation of Latvia, Estonia, and Lithuania.  With this act, Welles set in place the policy of non-recognition that was so clearly stated in the Crimea declaration issued by Secretary Pompeo on July 24, 2018.  Mr. Welles was as right in 1940 as Secretary Pompeo was in 2018; both refused to accept the purported annexation of sovereign European territories by “one of their more powerful neighbors.”

When Mr. Welles wrote of “devious processes” designed to annihilate the “political independence and territorial integrity” of the Baltic Republics, he proved to be especially prescient in describing a situation that led Secretary Pompeo to echo his words 80 years later.  We reaffirm today that Crimea is Ukraine.  The United States calls upon Russia to end its occupation of Crimea and withdraw its forces and materiel from eastern Ukraine.  We further call on Russia to release all Ukrainian political prisoners it currently holds and return them to their families and restore stability to that part of Eastern Europe for the benefit of the future, not only of the people of Ukraine, but the people of Russia as well.

Mr. Chair, the United States fully supports Ukraine’s sovereignty, independence, and territorial integrity within its internationally recognized borders, including its territorial waters.  We do not, nor will we ever, recognize Russia’s purported annexation of Crimea.   We join our European and other partners in reaffirming that our Minsk-related sanctions against Russia will remain in place until Russia fully implements its Minsk commitments.   Our Crimea-related sanctions will remain in place until Russia returns full control of the peninsula to Ukraine.